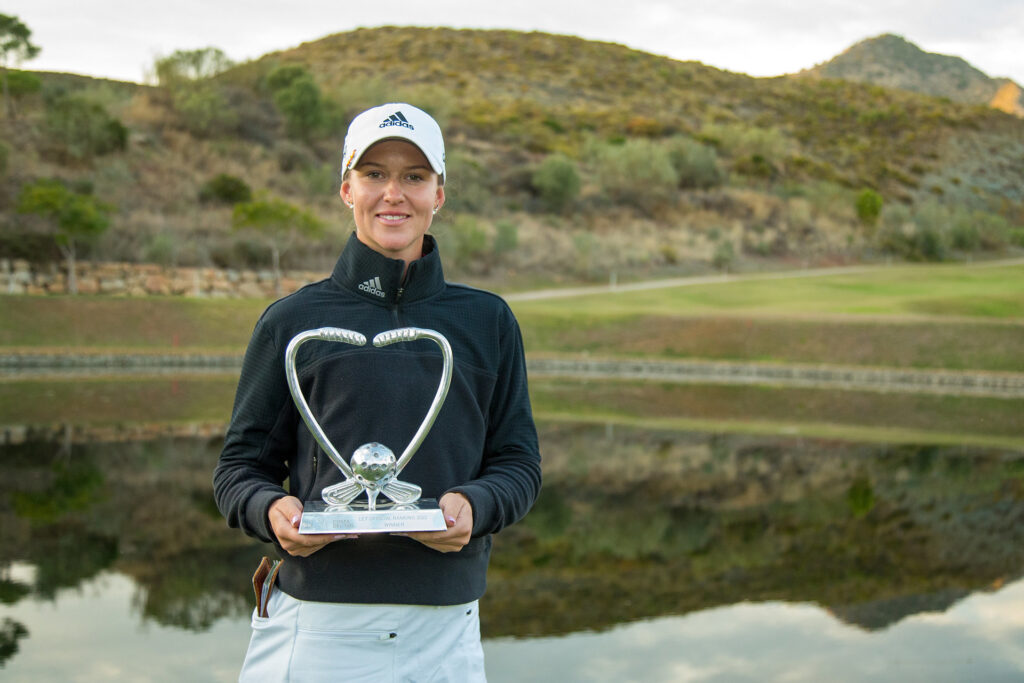 The LET season comes to a close whilst the DP World Tour 22/23 season begins. Here's our weekly tour round-up.

It was clear from the outset that Linn Grant meant business as she commenced her first year as a professional. Starting the year on the Sunshine Ladies Tour she took victory and her first professional win in her first start. It wasn't just any victory either, it was a seven-shot dominating performance at the Dimension Data Ladies Challenge.

Less than two weeks later Grant added a second Sunshine Ladies Tour victory to her resume, winning the Jabra Ladies Classic by two-shots. Unsurprisingly it made us use the headline 'Grant one to watch this season'.

And we weren't wrong, when the Ladies European Tour came to South Africa for their second event of the season, Grant made her mark by winning on her first start as a full LET member at the Joburg Ladies Open. Yet another convincing win by five-shots and at that point it was three wins in four starts!

Grant's second LET win came in May in her fifth event of the LET calendar at The Mithra Belgian Ladies Open where she held off a strong performance from England's Cara Gainer.

Although the 23-year-old already had four wins under her belt, it was her subsequent victory for which her rookie professional year will be most remembered.

In only its second year the co-sanctioned Scandinavian Mixed delivered a column inch grabbing storyline as Grant made history as the first woman to win on the DP World Tour. But like with so many of the Swede's dominating performances this season, it was a nin-shot victory which made it extra special.

Grant's final and fourth win of the LET season came in August at the Didriksons Skaftö Open, a second win on home soil in front of her home crowd.

“Just like the Scandinavian Mixed it’s always good to win at home and I always really enjoy playing here, it really reminds me of playing amateur golf,” Grant commented at the time.

Fast forward to November, with the Rookie of the Year already secured, it was the final event of the season. The week was set to be a battle between Grant and fellow Swede Maja Stark for the Race to Costa del Sol title. Grant came within touching distance of winning the final event of the season with a fantastic eagle on the 17th. She had to settle for third but it was enough to win the LET order of merit.

If anyone was in doubt about Grant's season, here are her LET/LPGA season stats:

Read the full round-up from the season-ending Andalucía Costa del Sol Open de España which was won by Caroline Hedwall after a play-off here.

When you enter a tournament on a sponsor’s invite, with no status and only your third professional start, you don’t really have much to prove. But it was a fairy tale week for Wakefield golfer Dan Bradbury who went wire-to-wire to secure his first DP World Title at the season-opening Joburg Open.

The 23-year-old finished three shots clear of Finland’s Sami Valimaki. The win gave Bradbury a two year exemption on the DP World Tour, £144,000+ prize and the cherry on top of the cake was a place in the 151st Open Championship.

Bradbury said: "It won't sink in for a few days, I don't think. It's just a lot of pressure taken off your back - that's nice.

"I just enjoyed it, a lot of good golf, it was just a great week all round. Just drawing on experiences from college golf, just played solid golf, didn't try and do anything I couldn't do."

A life-changing moment for the young golfer who now has the whole DP World Tour season ahead of him.

Joining Bradbury at next year’s Open is Sami Valimaki and Christiaan Bezuidenhout. Bezuidenhout took the final qualifying place thanks to his higher position in the Official World Golf Ranking after finishing in a tie for third place on 17-under-par with Daniel Van Tonder.

The DP World Tour was also in Australia this week and it was the Australian’s golden-haired hero Cameron Smith who made it a third Fortinet Australian PGA Championship victory.

Having not played in Australia for three years, there was excited anticipation of Smith’s return to home soil, even if a little tainted by his move to LIV Golf. Australian golf fans were delighted to see the current World Number three and were certainly not left disappointed by his performance.

After a weather delay hit final day, Smith carded a three-under-par final round to win by three shots.

Commenting on his victory the 29-year-old said:

"It's awesome. I really didn't think I had it in me at the start of the week.

"I was a bit scratchy and the game has got better and better as the week went on, other than the front nine today."

There is an exciting week ahead as we head into the Australian Open – where for the first time in the world, the women’s and men’s events will run together at the same time and the same venues. Watch this space for more information.