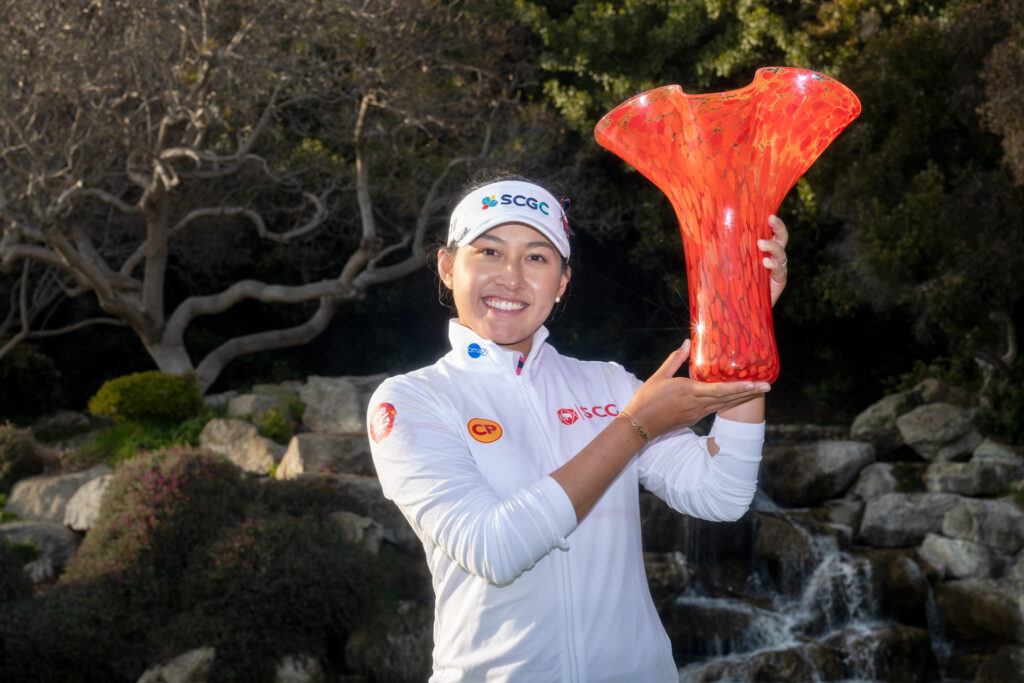 A lot of people will say that winning on the LPGA Tour was only a matter of time for teen Thai sensation Atthaya Thitikul, but I’m not sure how many would have predicted that she would achieve this after just five starts on the LPGA.

That’s exactly what the 2021 Ladies European Tour Race to Costa del Sol champion has done and in quite some style too.

The final round at the JTBC Classic presented by Barbasol was one for the books. LPGA Tour rookie Atthaya Thitikul entered Sunday six shots back of leader Nanna Koerstz Madsen and fired the round of the week – an 8-under-par, 64 with just 24 putts – to post at -16 and hold the clubhouse lead with four groups left to play. Koerstz Madsen came to the 18th with a one-shot lead, needing a par to earn her second title in as many starts, but a three-putt dashed those hopes, sending her back to the tee to duke it out with the Thai.

A wayward drive on the second playoff hole led to a second shot in the water for the Dane, opening the door for Thitikul to become a Rolex First-Time winner in her fifth start as a Member. Atthaya is no stranger to success – she won the 2021 Race to Costa del Sol, Rookie of the Year, Player of the Year on the Ladies European Tour – but was still feeling nervy in the playoff with so much on the line.

“I would say it's a lot of things going through my head, but one thing that I really wanted to focus on is just do your best every single shot. If you lose, if you win, this is another chance to learn. So do your best every single shot. Everyone comes here they want to win. I want to win as well but didn't expect that it was going to come really fast. It's crazy in my mind right now. I cannot believe that I became an LPGA winner. It feels amazing.”

Getting into form for major week

With the win, Thitikul moves to fourth in the Race to the CME Globe with 734.75 points and becomes the sixth player from Thailand to win on the LPGA Tour.

After an unfortunate second shot into the water on the second play-off hole with her feet on the cart path, Koerstz Madsen ultimately finished solo second in the JTBC Classic. While the ending was a touch disappointing, the 27-year-old isn’t being too hard on herself, instead choosing to focus on the positives derived from her win at the Honda LPGA Thailand and her second place at Aviara Golf Club as she heads up the road to the Chevron Championship. “I'm very proud,” she said. “I played really good week all week; had four rounds under par. It feels good doing that after a win.”

Focus now shifts to the first Major of the season - The Chevron Championship. Read our preview here.

Grant starting the season as she means to go on

We already predicted that Linn Grant would be one to watch this season It was a dream start to life on the Ladies European Tour (LET) for Linn Grant, as the Swedish star claimed a five-shot victory at the Joburg Ladies Open in her first start as a full member.

The 22-year-old was co-leader with Maria Hernandez on five-under-par heading into the final day, but she was a cut above the rest on the final 18 holes at Modderfontein Golf Club, as she fired in a final round of 67 (-6) to win by five shots in Johannesburg on -11.

We already predicted that Grant would be one to watch this season. This victory was her third in the last month on the Sunshine Ladies Tour, having already claimed success at the Dimension Data Ladies Challenge and Jabra Ladies Classic in February.

And she completed her South African hat-trick in style on Saturday, with the rest of the field having no answer for her incredible final round.

“It’s always nice to get a win, it feels amazing. It was great to come to the Sunshine Ladies Tour before the LET season began to make the most of the good weather and get some practice in," Grant said.

“I still feel like there’s some scary holes here, especially coming in on the back nine, you have to keep your shots together and there’s a couple of holes you have to look out for on the front nine as well, so I tried not to do anything stupid really.”

Grant had already shown her calibre with two second-placed finishes on tour in 2021, after getting invites to the Didriksons Skaftö Open and the Creekhouse Ladies Open, but after earning her card at Q-School in December she wasted no time in making her mark as a full-time member.

"It’s nice to have my dad on the bag, he’s been with me for so many tournaments – some wins, and some not – so it’s nice because we’re not together as much anymore, it’s always a nice feeling to have him here with me, especially when things like this happen."

It was a career-best finish for Metraux in South Africa, with the Swiss star maintaining her good form from Friday into the weekend, as she rolled in four birdies on her way to a final day score of 71 (-2) and a second place finish.

Three players tied for third spot in South Africa, with Alice Hewson and Hernandez finishing on -5 alongside home favourite Nicole Garcia, after rounds of 72 (-1), 73 (par) and 71 (-1) respectively.

Elsewhere, American Kelly Whaley achieved a second consecutive top ten finish in sixth spot, as she finished on -4 overall after a final round 72 (-1), while Stacy Lee Bregman and Alexandra Swayne tied for seventh on -2.

Victory in Johannesburg takes Grant into a tie for the lead of the 2022 Race to Costa Del Sol on 500.00 points, and sees her sit level with Aramco Saudi Ladies International Georgia Hall and Magical Kenya Ladies Open victor Esther Henseleit.

Sweden's Linnea Strom won her second Epson Tour title at the IOA Championship pres. by Morongo Casino Resort & Spa in California. The 25-year-old posted rounds of 71-66-67 to win by three shots on 11-under-par.

With his third PGA Tour win of 2022, Scottie Scheffler has overtaken Jon Rahm to take the top spot in the World Golf rankings.

The 25-year-old who was the runner-up in the tournament last year, was just too strong for fellow American Kisner and won 4&3 at Austin Country Club in Texas.

Talking emotionally about his win:

"I really don't know what to say. I'm just really pleased. It's a tough week, a long week. I figured out my routine to keep some energy. But I'm pretty worn out right now to be honest.

"It's a dream come true to play in front of my hometown fans here, going to school here. I have some good memories on this golf course, coming out to watch this tournament."

With just 10 days to go until The Masters - Scheffler has to go in as one of the favourites.

This week is the Valero Texas Open.

Rounds of 67, 71, 73 left Ferguson in the frame moving into Sunday, where he started three shots off the pace. In tough scoring conditions, Ferguson recorded 14 pars, and then came to life with an eagle on 16, followed by a birdie on 18 signing for a two-under-par 70, to finish on -7 and to win by one shot.

Following his victory on Sunday, Ferguson outlined how the years of hard work had finally made his dream come true:

"I just can't believe it at all. Years and years of hard work, My mum, dad, sister and brother and all my family gave me everything to try and get to this moment and it's an absolute dream come true. I think I've been in contention enough now on the Challenge Tour and out here at the start of this year a little bit, and I just managed to deal with it today- I'm obviously a winner now - it's incredible”