Australian Open in world-first for golf 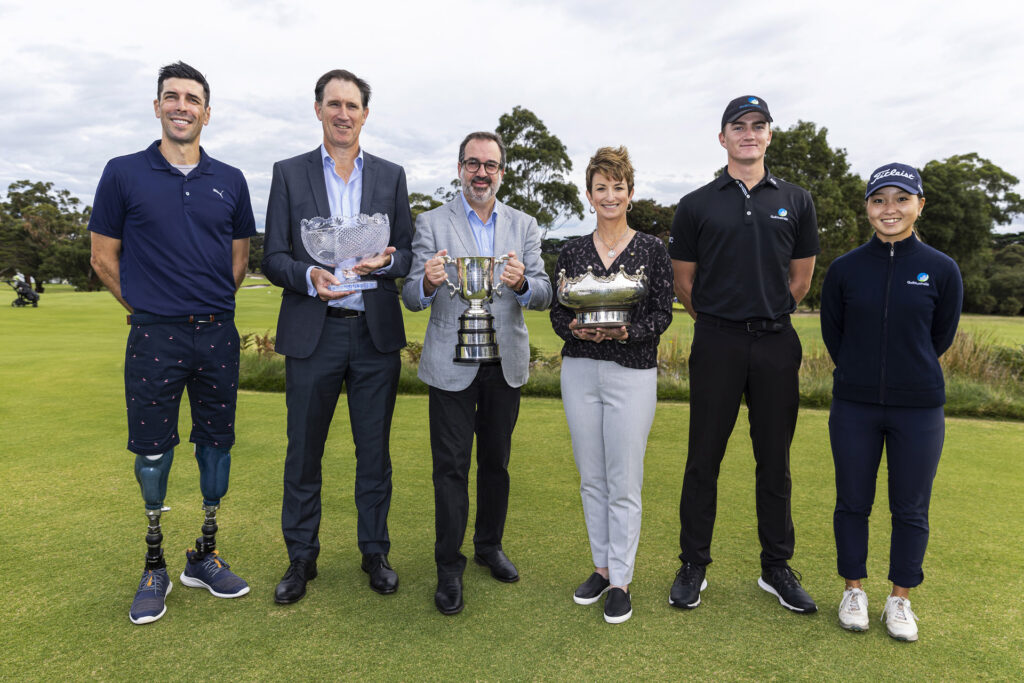 For the first time, the marquee events will be played at the same time and at the same venues, with the event to be held on the world-famous Melbourne Sandbelt from December 1-4, 2022.

Victoria Golf Club is the primary host venue across all four days of the tournament and Kingston Heath Golf Club is set to host play on the first two days.

In another first for the Australian Open, the men’s event will also be sanctioned on the DP World Tour, putting Australian golf on the world stage for two consecutive weeks with the Fortinet Australian PGA Championship to be staged at Royal Queensland the week prior.

Field sizes of 144 men and 144 women will compete for an equal split of the minimum $3.4 million prizemoney on offer.

This year’s Australian Open will also feature the third edition of the Australian All Abilities Championship, which assembles the top 12 players on the World Ranking for Golfers with Disability (WR4GD) from across the world supported by global partners EDGA, the International Golf Federation and newly formed G4D Tour.

Men's and Women's Australian Open and Australian All Abilities Championship

“This truly is a coup for Australian golf – it presents a great opportunity for the game and will take the two Open championships to another level.

“We've seen the success of the Vic Open in this format, and more recently the Webex Players Series where men and women play for the same title.

“We’re incredibly excited to be able to make this announcement today, and it wouldn’t have happened without the support of Visit Victoria and the Victorian Government.

“Victoria’s renowned Melbourne Sandbelt is once again going to host a world-class golf tournament, and we are delighted to be partnering with the DP World Tour in the co-sanctioning and broadcast through its vast global network.

A fantastic opportunity to showcase golf on a global stage

“We are delighted the Australian Open will feature on the DP World Tour’s schedule for the first time in December and we look forward to working with Golf Australia in bringing another world class event to Melbourne, the sporting capital of Australia.”

“Showcasing the Australian Open and Women’s Australian Open on iconic golf courses in the heart of Victoria’s famous Melbourne Sandbelt presents a fantastic opportunity for both memberships to compete on the global stage and our thanks go to Golf Australia, Visit Victoria, the Victorian Government and the ISPS HANDA PGA Tour of Australasia for their vision and commitment to our wonderful game.

Sutherland said that both events’ incredible history will not be lost.

“The men are still playing for their own Australian Open title for the Stonehaven Cup, and the women for the Patricia Bridges Bowl. Both trophies have been won by some of the best golfers to play the game.

“We have huge aspirations for this event. This new format will provide the springboard for a wonderful celebration of golf.

“The move aligns with our new national strategy and our ambitions to appeal to new audiences. In keeping with our belief that golf is a sport for everyone, the strategy demands that we present our tournaments as inclusive and fun events.”

Another highlight of the Australian Open will be the third edition of the Australian All Abilities Championship, which assembles the top 12 players on the World Ranking for Golfers with Disability (WR4GD) from across the world supported by global partners EDGA, the International Golf Federation and newly formed G4D Tour.

“The Australian Open has been a world leader in this space,” Sutherland said. “We are committed to staging and promoting the All Abilities Championships and look forward to seeing other follow our lead by providing more high profile pathway opportunities internationally.”

Find out more about the Australian Opens here.