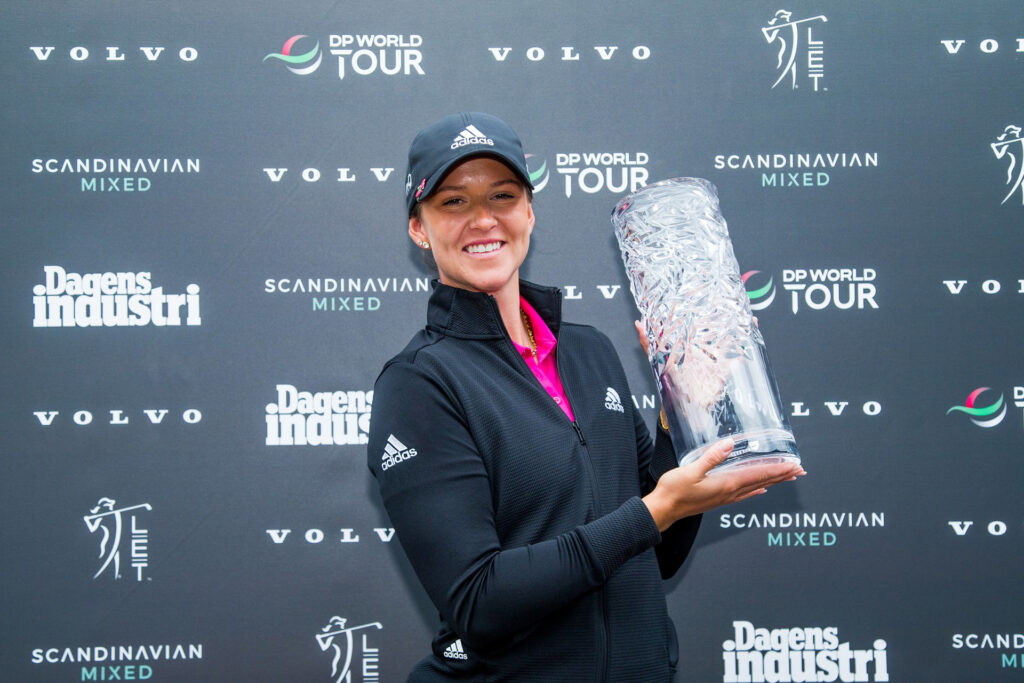 The stand-out moment in what was a pretty crazy week in professional golf was Linn Grant’s victory at the Volvo Car Scandinavian Mixed.

The 22-year-old Swede stormed to a sensational nine-shot victory at Halmstad Golf Club and capped a historic week shooting rounds of 66, 68, 66 and 64 to win with a total of 24-under-par and become the first female winner on the DP World Tour.

The Volvo Car Scandinavian Mixed is a co-sanctioned event between the LET and DP World Tour which sees 78 men and 78 women playing for the same prize fund of US $2 million and one trophy.

Grant began the day two shots clear of Australia’s Jason Scrivener and got off to a blistering start rolling in birdies on five of her first six holes.

Three further birdies on the back nine saw the Helsingborg native seal an emphatic win – her third on the LET in 2022.

“I’m speechless and I’m so happy that I’m at home just to see all the kids and my family is here and everyone that I care about is watching, so it’s really nice.

“I was actually surprisingly calm on the first tee. My first day with Annika was my most scary and stressful one, so today on the first fairway I told Pontus that I was very calm and it’s very doable today to play with this.

“I felt happy and relieved and to be able to get in the zone and just enjoy golf for a last day was very nice. When I walked up on the 13th green, I saw the leaderboard and I saw it was eight shots and it was very relaxing to not have to change gears and I could just go out and continue doing what I was doing.”

Grant played in the Volvo Car Scandinavian Mixed last year as an amateur when she finished 18th before turning professional in August.

In December Grant secured status on both the LPGA Tour and LET before heading to South Africa where she claimed two victories on the Sunshine Ladies Tour and then secured her first LET win in the co-sanctioned Joburg Ladies Open.

The former Arizona State University student clinched her second LET victory in Belgium two weeks ago, before adding another this week.

And after recording her sixth victory since turning professional, Grant hopes her win in a mixed event will put more eyes on the women’s game.

“I hope this victory is big. I hope it brings women more forward and it gets people’s eyes on us a little bit more. It is always nice to say that you beat the guys for a week! To be able to speak Swedish and hear everyone out there cheering for you, it was amazing.”

Co-host Henrik Stenson had to settle for second place

Scotland’s Marc Warren and Sweden’s Henrik Stenson both finished in second place on 15-under-par, after final rounds of 65 and 70, respectively.

Stenson said: “I think in the end I ended up tied second with a couple of late birdies and the only thing I could have done better was solo second because there was just one player out there today and she played amazing.

“Every time I looked back, she was in prime position and just gave herself birdie chance one after another I would imagine, so there wasn’t much I could do against a player like that, so very well played and congratulations to Linn.”

Rounding on the top ten were England’s Paul Waring, Denmark’s Niklas Norgaard Moller and Spain’s Sebastian Garcia Rodriguez, who all finished the tournament on 12-under-par.

The LET now travels to England for the second Aramco Team Series event of the season at Centurion Club.

Six years to the day since she earned her first major title at the 2016 KPMG Women’s PGA Championship, Brooke Henderson rallied from four shots back at the ShopRite LPGA Classic Presented by Acer to earn her 11th LPGA Tour title. Henderson, who entered Sunday in a tie for ninth, recorded a bogey-free 64 to finish at 12-under-par and ultimately win a play-off against American Lindsey Weaver-Wright.

“I actually thought I was too far back coming into today, and I just tried to go as low as I could and see what happened and here we are, said Henderson, who became the 29th player in Tour history to earn at least $9 million in career earnings after taking home the $262,500 winner’s prize.

Henderson, who hit every fairway on Sunday and 16 of 18 greens, was five-under-par for the day through her first nine holes, highlighted by an eagle on nine to first tie the leader. Two more birdies on 12 and 18 sealed the clubhouse lead, until Weaver-Wright carded a birdie on her last to force extra holes.

Rising to the moment, Henderson’s approach on the play-off hole, 18, landed seven feet from the pin and, as Weaver-Wright made a par, the Canadian superstar sank her eagle putt to win for the first time since the 2021 DIO Implant LA Open.

“I obviously only really had one opportunity, so I just tried to go at it and hit really solid shots.

To walk up the fairway and see that I was pretty short was a big relief. Then just needing two putts to win was awesome,” said Henderson, who is now 2-for-1 in play-offs.

England’s Jodi Ewart Shadoff finished in solo third behind Weaver-Wright at 11-under-par overall after shooting a 67 for the second consecutive day. It’s her best result on Tour since the 2020 Dana Open, when she finished in a tie for second. Ewart Shadoff sealed third place after a final eagle on the 54th hole, which she called the highlight of her round.

Lydia Ko finished in a tie for fourth with Albane Valenzuela, who was vying to be the first Swiss winner on the LPGA Tour. Both players posted four-under-par 67s. The 2004 ShopRite LPGA Classic champion Brittany Lincicome along with LPGA Tour winners Marina Alex and Nasa Hataoka tied for sixth at nine-under-par. Defending champion Celine Boutier carded the low round of the week – an eight-under-par 63, the same score she recorded on the final day in 2021 – to finish in a tie for ninth with Jenny Shin and Brittany Lang.

It only feels like the U.S. Women’s Open was yesterday, but we’re gearing up for another Major. The Meijer LPGA Classic for Simply Give in Michigan is this week before Congressional Country Club for the KPMG Women’s PGA Championship next week.

Rory McIlroy came back from a mind-round wobble to go back-to-back for the first time in his career at the RBC Canadian Open.

The Irishman was on a hot streak after birdies on eight of the first twelve holes, but then saw his three shot lead slip away. Playing in a three-ball with Justin Thomas and Tony Finau, they battled right until the end with McIlroy finally getting his mojo back, getting birdies on the final two holes.

A final round 62 was enough to secure his 21st PGA Tour title and move himself in front of LIV Golf CEO Greg Norman. A point that wasn’t lost on him:

They’ll be a lot of golf fans out there hoping he can take this momentum into this week as the U.S. Open is contested at The Country Club in Brookline.

Kobori started the final round one shot ahead of the chasing pack and fired a round of four-under-par 68 to capture her first win in her first European start.

“I am so happy with not only how I played but with the whole experience this week and with making the decision to come to Europe,” admitted the champion.

Kobori hasn’t dropped a shot since the 12th hole on the first day at Golf de Montauban and began her final round with back-to-back birdies.

The Kiwi then added another birdie on the par-three 10th and rolled in her final birdie on the 16th, which was enough to seal victory.

“It doesn’t happen very often to have a bogey-free round and to have two in a row is really amazing,” she said.

“I think the key for me this week was solid ball striking. I hit a lot of fairways and greens which really helped.”

McCook came back to competitive golf this season after a two-year break, being affected by the pandemic followed up with an injury last season.

She added: “It’s been probably the first time in four years I found myself in a situation like this. It felt good to be back in that position and know I was playing really well.

“I think the nerves were a positive feeling for me because I was in contention until the very end. I focused on every shot as I knew I had a chance with each one, so I guess it does help me to stress a little bit more.”

With her second-place finish, McCook made the most significant move in the LETAS Order of Merit as she jumped from 52nd up to ninth spot and she now has 365.70 points with Noja continuing to lead the way on 952.00 points.

The LET Access Series now heads to Denmark for the Smorum Ladies Open by EC Drive, which is taking place June 15-17.

Lucy Li went bogey-free on her back nine on Sunday at Kinston Country Club in Kinston to sign for a two-under-par 69 and force a play-off with Alexa Pano. The 19-year-old then went on to eagle the first play-off hole to take home her first Epson Tour and first professional title at the Carolina Golf Classic presented by Blue Cross and Blue Shield of North Carolina.

Li follows in the footsteps of 2021 champion, Sophia Schubert, who went on to finish fourth in the Ascensus Race to the Card last year, joining the LPGA Tour for the 2022 season.

This week the Epson Tour has the Ann Arbor's Road to the LPGA powered by the A2 Sports Commission at Travis Pointe Country Club.