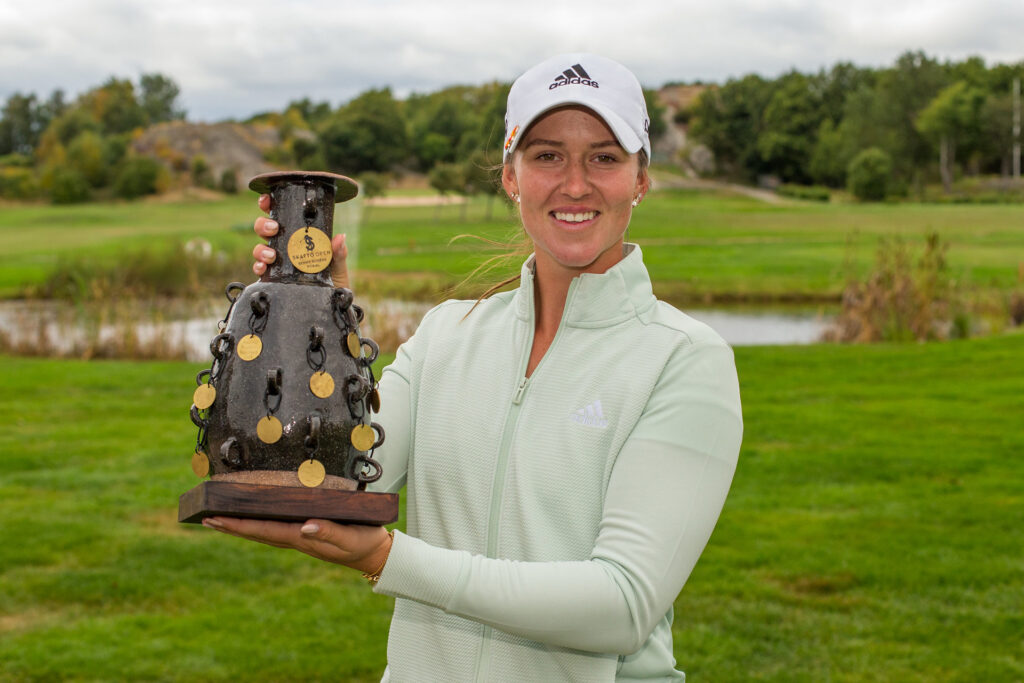 Linn Grant won her fourth LET title of the season and her sixth pro win of the year, plus Rory McIlroy got a magical win at the season ending Tour Championship

Linn Grant won her fourth LET title of the season with back-to-back birdies on her final two holes enough to earn her the Didriksons Skaftö Open title.

The Volvo Car Scandinavian Mixed champion turned on the style in front of her home crowd once again on the Swedish West Coast, as she pulled some magnificent shots out the bag on the final stretch to see off compatriot Lisa Pettersson by a single shot.

It was something of an up and down day for Grant up until then, with two three-putts on the 11th and 15th to see her give the chasing pack some hope, but she kept her cool to ease herded back to the top as the round drew to a close.

The 23-year-old had a two shot lead at the turn before dropping those shots, and she was delighted to finally get over the line at the end.

“It was exhausting, it was a rollercoaster today, I felt I started off a bit shaky. I missed some birdies on the par fives but then got myself on a good setup after nine,” she said.

“I did some bad three putts then finished off with two birdies, so it was a very up and down day.

“My short game was both really good and really bad today, I managed to hit some really bad ones first then saved them up for the end when I nearly holed two or three.”

As is ever the case when Grant runs out victorious in an LET event, she was in a share of the lead heading into the final day, with Ana Peláez Trevino for company on -9 before the action got underway.

But after a dropped shot on the second there were a number of competitors for top spot, with as many as five players tied for the lead at one point in the afternoon, before birdies on seven and eight put the Swede back into the ascendency.

But the double-bogey on 11 soon saw the field pull back into contention, as the home favourite looked to be playing herself into trouble.

A birdie and bogey on 14 and 15 respectively saw her head into the last three holes a shot behind clubhouse leader Lisa Pettersson, who proved her decision to focus on European golf to be the correct one as she ended on -9 for the week.

But as the old adage goes - form is temporary and class is permanent - and Grant proved that after a tremendous tee shot on the 17th to give herself a short putt for birdie to also bring herself to nine-under, before saving the best until last on the 18th.

With the galleries simmering away behind the final green, Grant almost reached the dance floor with her tee shot - instead landing in the green side bunker - before putting her effort from the sand inches from the hole to leave herself the simple task of rolling in a deciding birdie.

Another win for Grant on home soil

And after such a nail-biting final day, Grant was delighted to put on a show for the home fans who turned out to watch this afternoon.

“Just like the Scandinavian Mixed it’s always good to win at home and I always really enjoy playing here, it really reminds me of playing amateur golf.”

It was another strong showing from Pettersson on the final day, who has reaped the rewards from deciding to focus on the LET for the remainder of the season after a summer break.

Maja Stark and Becky Morgan both produced rounds of 65 to move themselves into a share of third on eight-under-par overall on Sunday, as they finished alongside England’s Alice Hewson who shot 67.

In total five players finished on eight-under-par after all was said and done, with Jessica Karlsson making it four Swedes within two shots of victory after a final day 67, while Elina Nummenpaa went round in level-par to achieve her highest ever finish on the LET.

In the Race to Costa Del Sol, Maja Stark retains her lead at the top of the standings, but her lead was cut to just 158.73 points, with Grant’s victory keeping things very interesting as we reach the climax of the 2022 season.

The LET moves to Finland for the Aland 100 Ladies Open By Alandsbanken.

In her 157th start on the LPGA Tour, Paula Reto finally became a champion. The 32-year-old from South Africa, who now makes her home in southern Florida, knocked in a two-putt par on 18 at Ottawa Hunt and Golf Club to capture the 2022 CP Women’s Open.

Reto, a nine-year LPGA Tour veteran, finished at -19 overall, one shot ahead of Nelly Korda and Hye-Jin Choi and two shots clear of Lydia Ko.

Talking about her win:

“I'm really, really excited and just proud of myself for being able to stick through the shots and the routines. Sometimes I find that's really hard to do, especially if you know you have only a few holes left.

“But I was really nervous, especially I started pulling a few shots and I told myself, okay, just stay in the moment and breathe. You go through all those things that you think will help.”

Reto’s Canadian success started on Thursday, when she shot a personal-best nine-under-par 62 to set the course and tournament scoring record, as well as tie the low round of the LPGA Tour season.

She stayed in contention all week and started the final day one stroke off the lead. Her morning was pure adrenaline, with Reto making the turn carrying a four-shot lead on the strength of five front-nine birdies.

But on the back nine, she admitted that the nerves came out and the birdies stopped flowing. “I started putting on the brakes, and that's probably not what you want to do,” Reto said. “I haven't really much been in this position, and I was just trying to control myself and be in the moment.”

Reto bogeyed the 14th to drop to -19, with former Rolex Rankings No. 1 Korda surging in the group ahead of her. Korda holed out for eagle at 12 to start her rally and pulled within a stroke of Reto with back-to-back birdies at 15 and 16. She lipped out a prime chance for a tying birdie at 17 and after finding the greenside bunker on her approach to 18, Korda’s two-putt for par gave Reto the room she needed to take her first title.

Henderson a massive hit with the home crowd

Choi started the day in a tie for the lead but could not get any momentum until late, opening with 14 straight pars before birdieing two of the last four holes. Ko tied the day’s low round with a bogey-free 63, but was too far behind at the start of the day to truly put any pressure on Reto.

Canadian Brooke Henderson, who entered the tournament with the weight of expectations on her shoulders, shot a two-under-par 69 on Sunday and finished at -5 overall tied for 49th. Despite the lackluster week, Henderson delighted the massive galleries that gathered at Ottawa Hunt, cheering wildly for her every shot.

“I didn't have my best stuff this week, but they didn't care and they were there with me every single shot,” said Henderson, who grew up less than an hour outside Ottawa and holds an honorary membership at Ottawa Hunt. “I'm going to sign a bunch of autographs and take some pictures now because I love them so much and I just can't believe they're out here in full force.”

The LPGA now travels to Ohio and the Dana Open presented by Marathon.

After a turbulent year in men’s professional golf – where LIV Golf has moved in and dominated the agenda – it seems extremely fitting that the player who has become that loudest voice in resistance has taken home the spoils of the PGA Tour season finale.

Rory McIlroy held his nerve to shoot a final round four-under-par 66 to end the TOUR Championship on 21-under-par. One shot clear of playing partner Scottie Scheffler and Sungjae Im. It wasn’t meant to be for World Number one Scheffler who could not take advantage of his six shot lead, carding a final round 73.

The Irishman becomes the first three-time winner in FedExCup history, adding this year’s title to the ones he won in 2016 and 2019. The victory also saw him collect a winner’s cheque of $18m.

Starting the week six shots back and then having a triple-bogey on his first hole, you would almost think McIlroy had blown his chances right from the off. But this is golf and this is Rory McIlroy. Two rounds of 67 were followed by an impressive 63 in the third – to keep Scheffler in his sights.

On his victory and winning his third FedExCup, a feat that even Tiger Woods hasn’t achieved, the 33-year-old said:

"To be the first to do anything in the game that you love so much, it's an incredibly proud moment. I got a little lucky with Scottie not playing his best golf today, and I took advantage of that with my good play. I went up against the best player in the world today and I took him down, and that's got to mean something.

The 2022/23 season kicks off on the 15th September at the Fortinet Championship.

Lawrence makes it win number two of the season

South African Thriston Lawrence secured his second DP World Tour victory of the season by defeating Matt Wallace in a play-off at the Omega European Masters.

Starting the day with a three-shot lead, Lawrence’s final round of 69 was not enough to keep away playing partner Matt Wallace at Crans-sur-Sierre Golf Club. Wallace shot a bogey-free 66 to join Lawrence at 18-under-par.

However, the 25-year-old, only required one extra hole to secure his victory in the mountains. He adds the Omega European Masters to his season-opening Joburg Open which he won last November. This win moves him to ninth in the Race To Dubai standings and sees him break into the World’s top 100 for the first time.

Talking of his victory, he said:

"It's a privilege to be able to take this victory. There's so much history going around this event, all the past champions, so can't wait to get my hands on that trophy.

"I was happy with my patience this week and just so pleased to be able to win."

After two days of having a four-way tie at the top of the leaderboard, the Circling Raven Championship has a winner. Jillian Hollis played lights out for the final 18, signing for an eight-under-par round. The Ohio native carded nine birdies and a lone bogey on the day.

“That’s awesome,” said Hollis. “That’s so great. It was getable today. I was enjoying myself and wasn’t counting and thinking I need to make another birdie. It felt really good out there, like all of my hard work was finally showing.”

“It’s been a lot of work,” said Hollis. “I’d be lying if I said it wasn’t. I wasn’t having fun on tour, so at the beginning of this year, I said I’m not going to do this anymore. I’m changing my life a bit and changing my attitude.”

“My goal this year was to be healthy and have fun,” said Hollis. “I put so much pressure on myself the last two years and then had an injury for most of 2021. To come full circle, it’s really cool. I’m so grateful for today.”