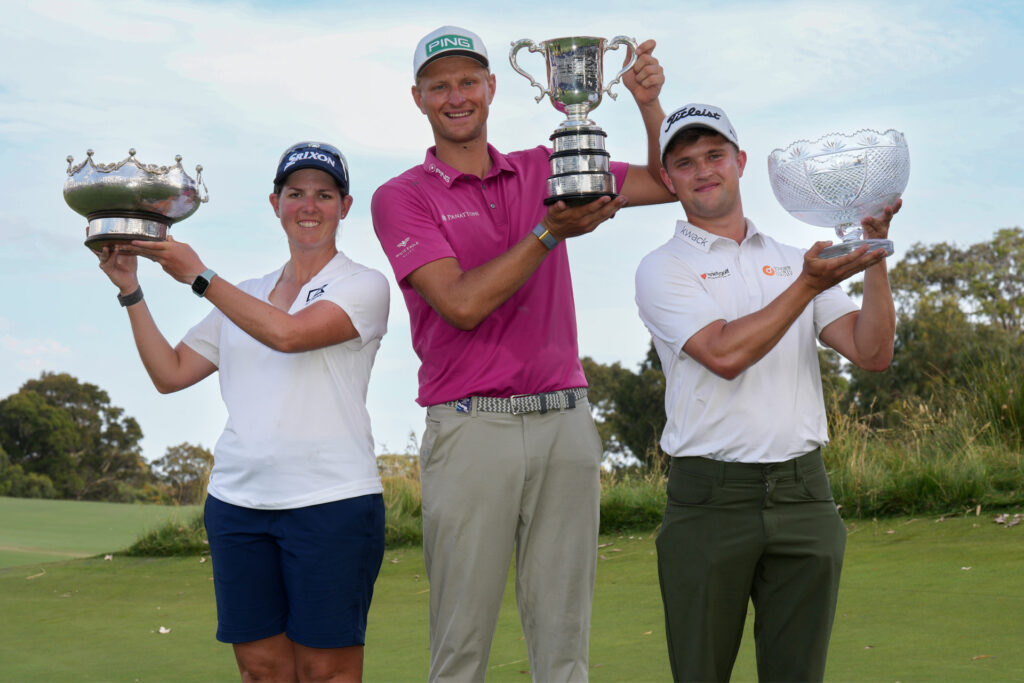 It was the day of the international raiders at the ISPS HANDA Australian Open as players from Poland, England and South Africa took the championships home.

Before another big crowd at the sandbelt jewel Victoria Golf Club, Adrian Meronk became the first Polish player to win the Stonehaven Cup for the men's Open in the tournaments' long history, finishing it with an exclamation mark when he eagled the 72nd hole.

World Number one Kipp Popert from Kent in the United Kingdom conjured a stunning final-round 69 in difficult conditions to overtake the leaders and win his first Australian All Abilities Championship as the Open celebrated the sport's inclusivity.

And South African Ashleigh Buhai completed the year in which she won her first major, the AIG Women's Open, by making par at the last to hold off Jiyai Shin of South Korea to win the Patricia Bridges Bowl as Australian Open women's champion by a shot.

The Australians fell away on the final day despite incredible crowd support.

Meronk duelled all afternoon with Adam Scott but ultimately won by five shots against the man who was his inspiration as a young man. Scott was close all day until he took iron for safety off the tee at the par-4 17th hole and deposited it so far right that it was out of bounds.

Talking after his victory Meronk said:

"I'm super excited and to finish like that on the 18th hole, it's just unreal. I am so grateful, thank you for the support and I enjoyed this week so much.

"I felt really good again today, I just kept doing what I had done the last two days and it worked pretty well, so I am just super proud of me and my team and super happy right now."

Similarly in the women's Open Sydney's Grace Kim had a great chance, reaching 11-under par and in a tie for the lead as she walked to the 18th tee, but Kim drove it into a fairway bunker and her first attempt to clear the sand failed, and a double-bogey seven ensued that cost her any chance of victory.

An emotional Buhai was nearly speechless after her victory, saying it was the cherry on top of the cake to finish off a fantastic year. She was also able to share in the moment with her husband Dave who was on her bag this week, helping to keep her calm in the final few holes.

Perth's Min Woo Lee and Hayden Barron in third and tied-fourth positions enjoyed the extra benefit of earning a place in the 2023 Open Championship at Royal Liverpool as a result of finishing in the top-three players not already exempt. Spain's Alejandro Canizares also receives a spot in the field for Liverpool.

On Saturday it was International Day of People with a Disability (IDPwD) and in a fitting celebration coincided with day two of the Australian All Abilities Championship at the 2022 ISPS HANDA Australian Open.

In a world-first, the world’s best all abilities athletes have been competing on course in the Australian All Abilities Championship (AAAC) alongside the ISPS HANDA Australian Open men’s and women’s fields at Victoria Golf Course.

The first day of play on Friday enthralled the crowds and set up an enticing weekend, with four players within two shots of the lead.

The All Abilities field also provided arguably the highlight of Friday’s proceedings at Victoria, when Italian Tommaso Perrino holed out from the bunker on the 18th for an eagle, with the grandstand and rows of spectators lining the ropes erupting in a roar heard from the furthest points of the course.

Since the first AAAC tournament was held alongside the men’s field at the Australian Open in 2018, which was again the first tournament of its kind, there has been a huge wave of development in disability golf.

In collaboration with the DP World Tour, the G4D (Golf for the Disabled) Tour was formed in 2022, giving the world’s leading players with disability the opportunity to play on the same course during the same tournament week as the DP World Tour.

Young Englishman Kipp Popert, the World Number one in the World Ranking for Golfers with Disability (WR4GD), won four of the seven events in the first year of the tour, and lived up to his reputation to lead play after the first day at the AAAC.

Heralded as a legend of Australian disability sport, Geoff Nicholas was born without his fibula or ankle in his right leg, which was eventually amputated while he was still a young boy.

11-times the winner of both the US and British Amputee Open, Nicholas says that the International Day of People with Disability is a fantastic way to not only promote inclusion, but also to inspire other people with a disability to engage in activities such as golf.

“It’s terrific. People think once you have a disability that’s it, but I think that’s why golf is such a good sport, anyone can play it.

“Golf has been my life, it’s sort of helped me along the way. Without golf – I think that’s why we play, people see us, and we can actually inspire people to compete.”

Observed by the United Nations, the day aims to increase public awareness, understanding and acceptance of people with disability and celebrate their achievements and contributions.

The theme for IDPwD 2022 is ‘Transformative solutions for inclusive development: the role of innovation in fuelling an accessible and equitable world’.

Find out more about the ISPS HANDA Australian Open here.