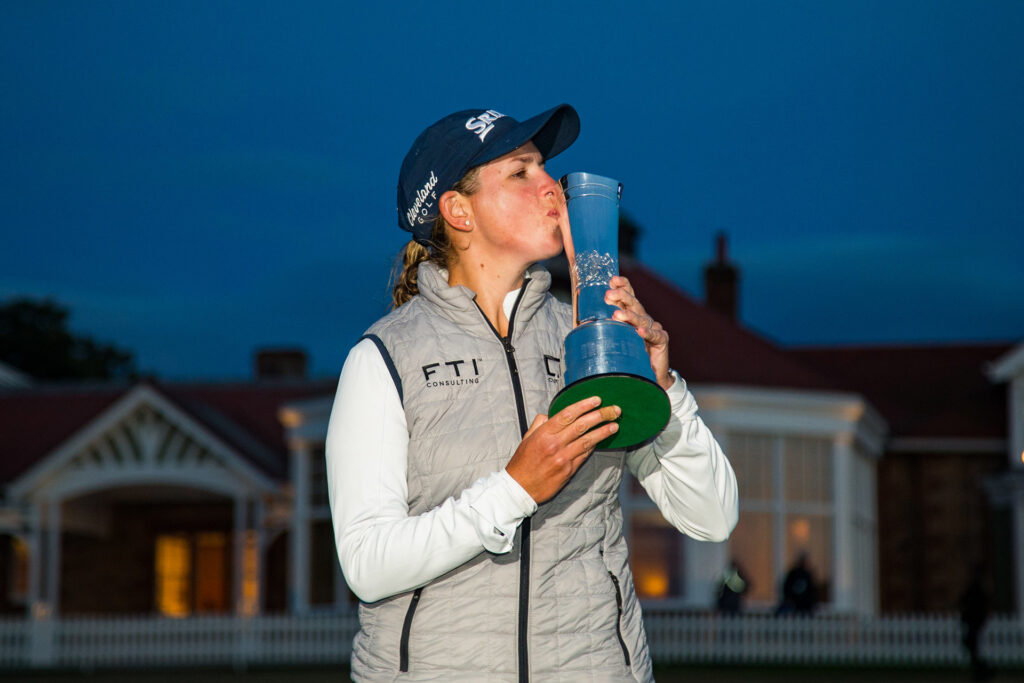 After a dramatic four-hole play-off, Ashleigh Buhai is the 2022 AIG Women's Open Champion

The final day of the final major of the year. Major Sundays and major drama just seem to go hand-in-hand. Even when the leader had a five-shot advantage at the start of the day. We knew it was never going to be easy, the windy conditions and course set-up have ensured that players have been kept on their toes all week.

In the end, it all came down to which player could hold their nerve the best and deal with the tricky situations that they kept finding themselves in.

Although the eventual winner was the one that most expected, the day certainly didn't go as scripted.

South Africa’s Ashleigh Buhai clinched the first Major of her career by winning the 2022 AIG Women’s Open after a four-hole playoff. The 33-year-old also becomes the first woman to win a professional golf tournament at Muirfield.

After being level on 10-under-par with Korea’s In Gee Chun after 72 holes, it took four holes to separate the duo.

Buhai who had shot rounds of 64 and 65 over the last two days started the final round with a five-shot lead.

It was a shaky start for the South African as she seemed to struggle to find her rhythm over the first few holes. A good par save on the first was followed by a drop shot on two. With her lead shortening, she steadied the ship with five pars and one birdie before a bogey on nine saw her make the turn one-over for the day.

Even though every day the players have had to tackle the windy conditions, it was the final day that seemed to cause the most problems. Strong, unpredictable gusts of wind saw balls flying through greens or ending up short.

As the round progressed and with the chasing back just two or three shots behind, it felt like playing to par would be enough to secure the Championship. But this is a major and it never quite goes to plan.

A triple bogey on the par 4 15th dropped Buhai to -10 and in a share for the lead with In Gee Chun. Afterwards Buhai explained what she was thinking about heading to the 16th tee:

"Not too much to be honest. I was just like, it is what it is. Get back in it. I didn't panic, which I thought was huge, and just tried to make a good swing on the next and just try to make good swings coming in to give myself a chance."

Although both came close, neither could find a birdie over the closing holes, so it meant heading back down the 18th hole.

Four times the crowds would get to see the two players trying to be split but there really was very little in it. As the sun began to set and the temperature dropped, it was too close to call.

The joy at winning your first major championship

However, these play-offs do come to an end and it was Buhai, the best sand saver on the LPGA Tour, who pitched to perfection to set up a par putt on the fourth play-off hole. Chun was unable to match and as Buhai's putt dropped, friends and family stormed the 18th green. It was clear to see this victory meant a lot.

Collecting her trophy, Buhai commented on her bunker shot on 18:

“I was surprisingly calm,” she explained. “I kept going through my steps and my thoughts and like I said yesterday, my only thought was 40% and that’s all I tried to do and stay in the moment. On the last, my caddie said to me ‘show them why you are number one in bunkers this year’, she gave me the confidence and maybe it’s also something to do with Muirfield and South Africans and bunker shots."

Buhai follows in the steps of fellow South Africans Gary Player and Ernie Els, who won The Open Championship at Muirfield in 1959 and 2002, respectively.

It's been a long journey for Buhai

After coming close in the 2019 edition of the AIG Women’s Open, it meant a lot for the South African golf star to finally get over the line.

"It’s been a long journey. I turned pro when I was 18 and there was a lot of things expected of me. I won straight off the bat on the Ladies European Tour. But this game has a way of giving you a hard time. I'm just so proud of how I've stuck it out.

"I have said the last four or five years, I've finally started to find my feet on the LPGA and felt I could compete, and although I'm 33 now, I feel I'm playing the best golf of my career.

"It's been a long journey, but man, it's all worth it right now."

Six players rounded out the top ten and finished in a share of seventh place on five-under-par including three-time LET winner Celine Boutier, 2021 Race to Costa del Sol winner Atthaya Thitikul and two-time LET winner Steph Kyriacou. The coveted Smyth Salver for low amateur was awarded to American Rose Zhang, who is the number one amateur in the world, after she finished in a tie for 28th place.

As the sun sets on a historic week for golf, I wonder whether The Honourable Company of Edniburgh Golfers will also reflect on Buhai's final statement. For those that may have been less enlightened in 2016, they will now have seen for themselves how worthwhile the journey of embracing change can really be.

View the full leaderboard here and watch highlights from the final day of the AIG Women's Open here.