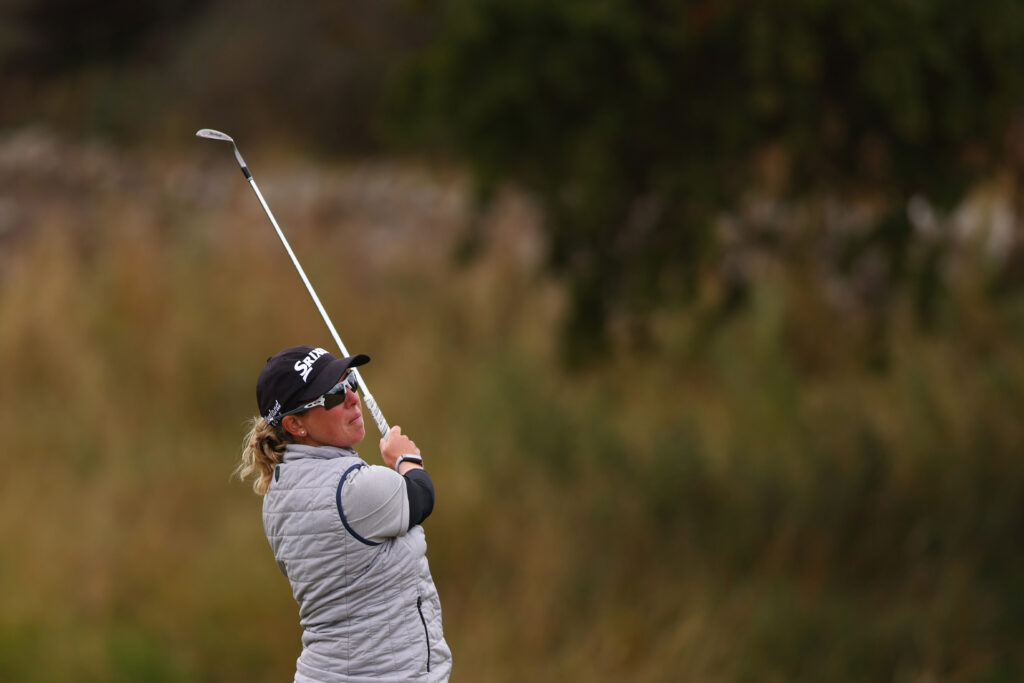 The final major of the year has always been about more than just the golf. The Honourable Company of Edinburgh Golfers have been under the microscope to see how much they really have embraced the change that they eventually voted for.

So far, the event has played out perfectly for the members at Muirfield. Fantastic course, fantastic golf and a fantastic atmosphere. It's hard to believe it could really get any better (apart from when they crown a champion on Sunday). But better is what they got.

Due to an odd number of players, Muirfield member Lesley Garden played as a marker for Lydia Hall in the first pairing on Saturday. What could have been a more perfect way to show how far the club has come since 2017?

Watch Lesley's opening drive and find out how she found her round.

At the start of the week, talk had been that even par would potentially be a good score to win at Muirfield. Players agreed with this statement as they played their practice rounds trying to navigate their way with the many different wind directions.

Three days into the AIG Women's Open and that theory has been well and truly blown out of the water. South African Ashleigh Buhai takes a five-shot lead into the final day but with four major champions in the chasing pack and the wind a major factor - it's certainly not over yet.

Here's what happened on day three at the AIG Women's Open

Buhai fired an exceptional course record of 64 (-7) in windy conditions. The three-time LET winner, who sat in second place overnight after carding a 65, picked up where she left off yesterday with five birdies on her front nine including four in-a-row on holes four through seven.

Buhai continued her fantastic play rolling in birdies on 10 and 14 before chipping in on the 17th for her eighth birdie of the day.

Although the South African finished with a bogey on the last, she reached a total of 14-under-par and holds a five-shot lead heading into the final day.

“I’m very pleased to be able to shoot that score in those conditions,” said Buhai. “You have to be able to pat yourself on the back, so much so I thought I was six-under and not seven. Looking back, it is one of the best rounds of golf I have ever played.

“I was feeling pretty calm, I have done good work on my swing with my coach for so long now and I feel my lines are where they need to be, and I just need to keep my tempo. If I keep my tempo, then most of the time the club falls where it needs to fall. I had a good warm-up today, I hit a few extra chip shots because I feel I didn’t chip too well yesterday when I had to, so at least it showed on 17 that that paid off.

“I don’t think you can ever be comfortable in a Major whether you’re coming from behind or leading. It’s going to be another tough day and the wind is going to blow, which is good I prefer it that way. But they say big leads are often more difficult and I think because you try to maybe play defensively, but if I keep doing what I’m doing and sticking to those steps then hopefully, it will be good enough.”

Japan’s Hinako Shibuno and Korea’s In Gee Chun are sharing second place on nine-under-par having shot rounds of 66 and 70, respectively.

2019 AIG Women’s Open champion Shibuno made six birdies and one bogey on her way to second place and was pleased with her day’s work.

Three-time Major winner Chun, who led at the halfway stage at Muirfield, made three birdies and two bogeys for her round of 70 (-1).

She explained: “It was not easy, and it was a bit windy out there. I think my game was really good today. I had two bogeys, but golf is not always easy. It was another good experience with the big wind out there.”

Korea’s Inbee Park and Sweden’s Madelene Sagström sit in a tie for fourth place on seven-under-par having shot rounds of 70 and 71, respectively.