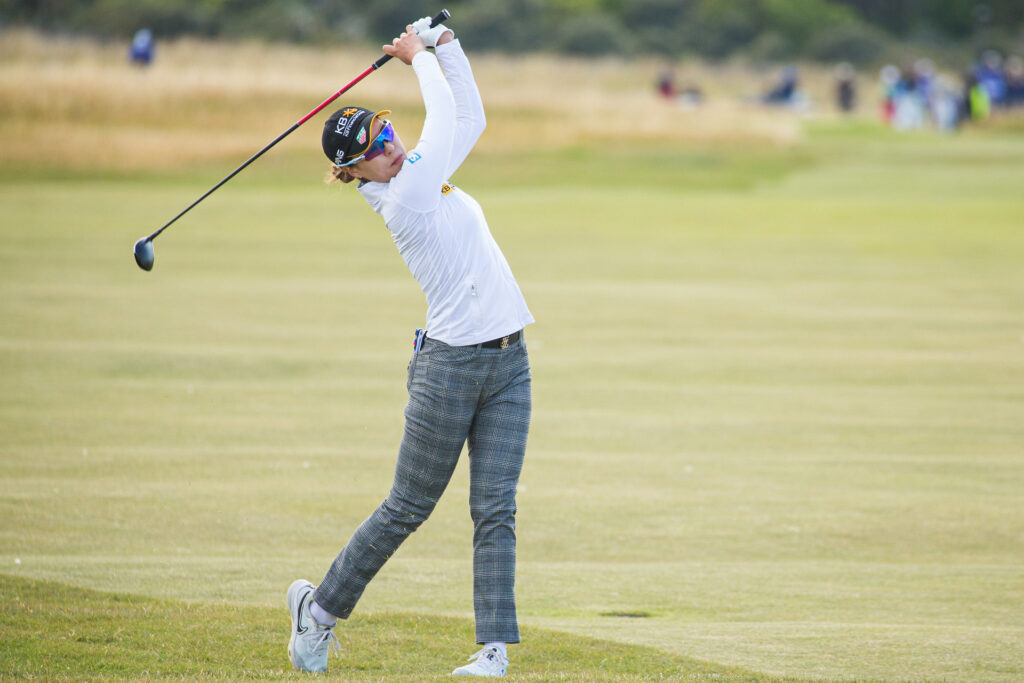 In Gee Chun, 2022 KPMG Women's PGA champion, leads by one-shot heading into the weekend at Muirfield

I'll admit that I was apprehensive when the AIG Women's Open was scheduled to be the final and fifth week of professional golf tournaments being hosted across Scotland. Not only that there was the Edinburgh Fringe and Commonwealth Games taking place at the same time.

We're only two days in and it's turning out that I really shouldn't have been worried. Today in particular there was a buzz around the course and in the Spectator Village which I believe has been very much lacking from the previous AIG Women's Opens that I have attended.

There was a great mix of golf fans, young and old, families and friends. All able to enjoy the interactive golf experiences, hospitality and of course the world class golf on show. If this was what Friday was like then it's safe to say that Saturday and Sunday will be even better.

Now to the golf. The biggest news from the day is that defending AIG Women's Open champion Anna Nordqvist will not be playing the weekend. A one-over-par second round meant that she finished one shot below the cut line at four-over-par.

It was the same fate that defending champions Hinako Shibuno and Sophie Popov suffered in 2021 and 2022 respectively. In fact, Popov has missed out again by also finishing on four-over-par.

With the cut being three-over-par, 65 players will tee it up on Saturday.

Chun leads by one into the weekend

Korea’s In Gee Chun produced a round of 66, five-under-par, to climb to the top of the leaderboard at the halfway stage of the AIG Women’s Open.

The three-time Major champion made the most of the afternoon conditions making two birdies and one bogey on her front nine before rolling in four birdies on her back nine to reach a total of eight-under-par.

And Chun, who leads by one shot, has a goal for the two rounds over the weekend thanks to caddie Dean Herden which is to go bogey-free.

“Before I started the tournament, my caddie Dean and I spoke about the course and after that, we had a little bit of a bet,” she said.

“If I make the bogey-free round, he said he's going to buy dinner and pay me like $100 for each day if I can make it. So, before I start the round, I always set another goal to make a bogey-free round. I think that mindset helped a lot on the course.

“But I hit two bogeys over the last two days. I want to keep trying to make a bogey-free round over the next two days.”

And Chun was thankful for the weather conditions on the 13th when she rolled a birdie putt to the edge of the hole and after a few seconds, it finally dropped in.

Chun added: “We have a big wind out there, but I have a great reason of why to love the Scottish now because my ball was sitting on the edge of the hole today, and after like three seconds it dropped in. Now I can enjoy Scottish greens.”

Rounds of the day

Sweden’s Madelene Sagström and South Africa’s Ashleigh Buhai sit one shot back in a tie for second place on seven-under-par.

It was an excellent day for three-time LET winner Buhai after she made the turn in 30 (-6) with four birdies and one eagle on her scorecard.

Another birdie rolled in on the 11th before the South African dropped a shot on her final hole of the day but has still firmly put herself into contention heading into the weekend.

“I’m super chuffed with how I played today. I stayed very patient,” she said. “I stuck with my steps and my processes, which is my goal this week, just to do those well and hopefully the outcome takes care of itself.

“I've been doing that pretty well the last few weeks and obviously I’m disappointed to end with a bogey. On 18, I hit it in the fairway and the divot was softer than I thought, so a little unlucky but I would have taken today's score at the beginning of the day for sure.

“I do love playing links golf. This is my favourite tournament of the year. I look forward to it, and I love links golf and the creativity that you have to have.”

Sagström rolled in eight birdies during her round of 65 (-6), which was the joint-best of the day along with Buhai, and said putting was the key to her round.

“Putting,” she said. “Putting, putting, putting. I did miss two quite short putts, but I putted really, really well today and that helped my momentum.

“I was hitting it good enough to give myself some chances and keeping it in play and I didn't hit in the bunkers today which helps in links golf but putting was the thing.”

Big names join Nordqvist and Popov in missing the weekend

Korea’s Inbee Park sits in fourth place on six-under having shot a round of 67 (-4) on day three with Japan’s Miyuu Yamashita and Australia’s Hannah Green one shot further back in T5.

France’s Celine Boutier is in a share of seventh place on four-under-par alongside Australian pair Minjee Lee and Steph Kyriacou, as well as 2019 AIG Women’s Open champion Hinako Shibuno.

Other big names who will be missing the weekend along with Nordqvist and Popov include; Jin Young Ko (+5), Carlota Ciganda (+7), Pia Babnik (+7), Patty Tavatanaki (+8) and Lexi Thompson (+10).