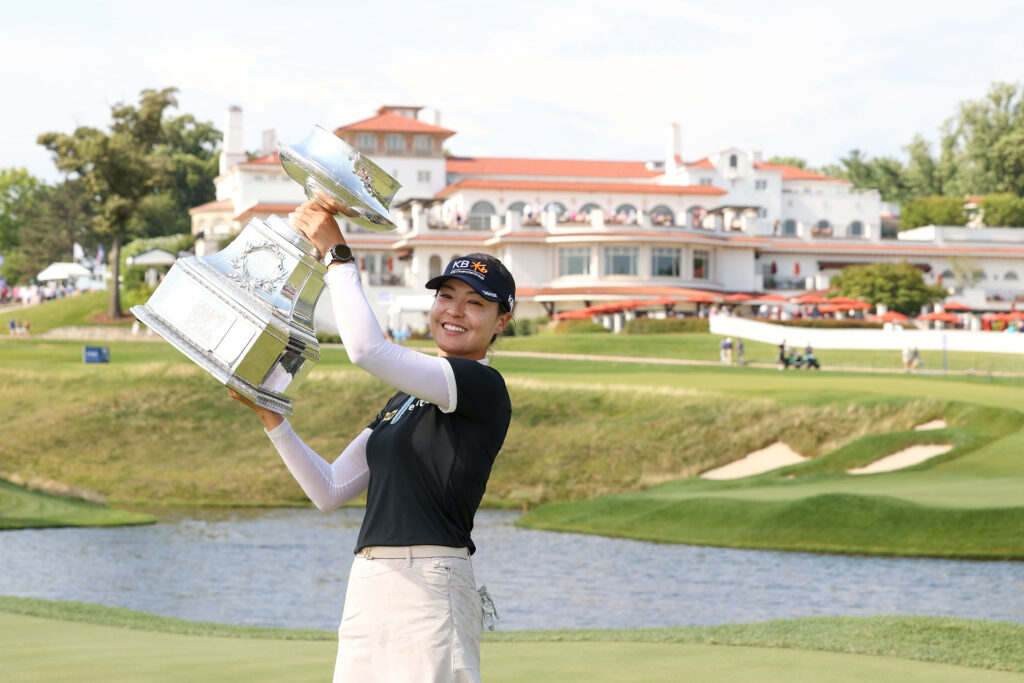 A tense final round at the KPMG Women's PGA, where Lexi Thompson and In Gee Chun battled for the major title at Congressional.

South Korea’s In Gee Chun had been hanging around the top of the leaderboard at the KPMG Women’s PGA Championship at Congressional Country Club since early Thursday morning. Sunday afternoon, when she wasn’t playing very well, when the bogeys were piling up and the winner’s trophy appeared to be headed elsewhere, she thought, what the heck ... why not give this two more hours and see what happens?

It was a wise – and quite lucrative – decision. Chun, 27, collected herself after shooting four-over-par 40 on the opening nine and rebounded with solid under-par play over her final nine holes. One final birdie at the par-5 16th hole, a clutch make from 11 feet, would be a difference-maker, as her late surge coincided with some closing struggles from leader Lexi Thompson and delivered Chun to her third major title.

It was the first victory since 2019 for Chun, who is affectionately called “Dumbo” by friends and fans because of the innate curiosity she displayed as a younger player. With KPMG’s announcement earlier in the week that the purse would be doubling to $9 million, it left Chun with a winner’s check for $1.35 million. The money was nice; she seemed to enjoy just having that big silver trophy. It had been a while.

“I made it – I make a win,” said Chun, smiling widely, after collecting her fourth LPGA triumph. On a rugged test that included a firmed-up golf course and strong winds on Sunday, Chun would shoot a pair of 75s on the weekend to finish at 5-under 283. “I hung in there. I’m so proud now.”

Agonising to watch Thompson unfold on the back nine

Thompson, also 27 and, like Chun, seeking her first victory in more than three years, surrendered a back-nine lead on Sunday for the second consecutive week. She played great through 10 holes, building a two-shot lead, then started making bogeys on the way home. She badly missed a two-foot putt at the par-4 14th, failed to make par from just in front of a bunker near the green at the par-5 16th  – which made for a two-shot swing with Chun – and encountered a three-putt bogey from 15 feet at the par-4 17th.

Thompson, an 11-time LPGA winner who won the 2014 Kraft Nabisco, a major, at age 19, had one last chance to force a play-off, but her 10-footer for birdie at the last hole drifted off short and right of the cup, leaving her at four-under-par along with U.S. Women’s Open champion Minjee Lee (70). Chun stepped up and made her three-footer for par to seal the victory.

Thompson signed autographs afterward outside the majestic clubhouse at Congressional, but declined to address the media after her final-round 73, which included shooting 38 over her final nine holes. She was emotional and in tears after the setback. Thompson, one of the LPGA’s mightiest and most popular players, was trying to end a string of 50 LPGA starts without a victory, and break a major-less streak that dates to her one and only major title, the 2014 Chevron Championship (then the Kraft Nabisco).

The pressure of the final day

Chun said she felt the pressure of being near the lead in a major championship throughout the day, but also knew she was not alone in feeling it. That thought helped her to hang in there when she needed to.

“Absolutely,” Chun answered when asked if she could sense players around her were struggling in handling their nerves. “I think every player when they are playing golf and when they play from the last group on the last day, everyone has pressure.

“So, I thought this pressure is not just me. Then the key is who can handle (pressure) well. Still, I think her play (Lexi’s play) was great.”

Chun had opened the tournament with a brilliant eight-under-par 64 in the rain on Thursday – it was the best score of the opening day by five shots – and went wire-to-wire with the lead (as she had at Evian six years ago) despite conditions growing tougher over the weekend. Sunday brought steady winds, and the scoring average was 75.33. There was only round in the 60s, and only four players turned in rounds below par.

Chun started with a three-shot lead

“We kept the panic out of it. It was such a tough day, we just kept things light. Honestly, after the 10th hole, she probably thought somebody else was going to go on to win. ... It all changed rather quickly.”

It did. Minjee Lee, a winner in two of the last four women’s majors, including last month’s U.S. Women’s Open, started Sunday six shots behind Chun, a friend who lives on the same street as her at Las Colinas, outside Dallas. Lee started her round bogey-bogey.

But beginning at the par-4 fifth, Lee would make five birdies, something those around her just weren’t able to do. She had a putt for eagle to take the outright lead at 16, a par-5 moved up to 495 yards that she reached with a driver and hybrid, and hit a wedge to two-feet at 18 for another birdie. In between, though, came a costly bogey at 17, where she three-putted, pushing her par putt from four-feet.

“I was quite happy with how I finished,” Lee said. “It was hard, but it was super fun. We play for these types of Sundays. ... Because the difficulty was that much harder and the wind was up, I think that's what made it even better.”

An emotional victory for Chun

When Chun won the 2015 U.S. Women’s Open in Lancaster, Pennsylvania – a town that would become her second home – she was not comfortable speaking English. She vowed to change that when she won another major. On the 18th green at Congressional on Sunday a place where so much history has taken place, with a big trophy by her side, she spoke with incredible eloquence, delivering a beautiful speech. She had written it out in advance on her yardage book.

“I did not have any wins in the last three and a half years,” she said before thanking all her sponsors for their support. “They always believed in me, and I really appreciate it.”

She also gave thanks to her “Flying Dumbo” fans back home in Korea for never giving up on her, “no matter how I did.”

Sunday, when times were toughest, In Gee Chun decided not to give up, either. She would stay happy throughout, regardless, and attitude would carry her through.

It was a terrific decision.