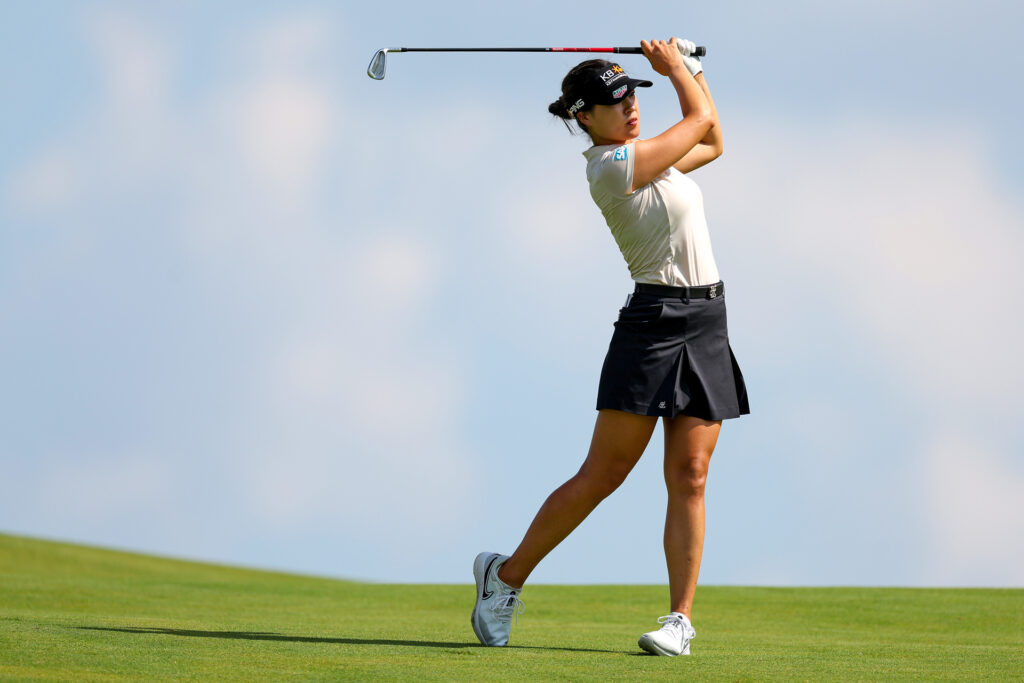 After a minor blip on the 16th, In Gee Chun still remains in the front seat with a three-shot lead at the KPMG Women's PGA Championship but major challengers are lying in wait.

It took 52 holes, but those gathered at this week’s KPMG Women’s PGA Championship waiting to see if In Gee Chun was mortal finally got their sign. Emphasis on finally.

Cruising along with a five-shot advantage late on the back nine at Congressional Country Club, Chun hit an errant third shot into a hedge at the par-5 16th hole that led to her first double bogey of the week. For the first time since early Thursday morning, when Chun jumped out to a five-shot lead with an incredible eight-under-par 64 in the rain, those around her had a sliver of hope. It was small, but at least there was a chance.

Chun, at eight-under-par 208 through three rounds, will take a three-shot advantage into Sunday at the KPMG, trying to land the third major championship of her career. She won the 2015 U.S. Open and 2016 Evian Championship.

Not surprisingly, Chun, 27, a beacon of positivity, met her bogey/double bogey stumble at 15 and 16 with a smile afterward. If things stayed too easy, she joked, they might get boring, and at the third major of the LPGA’s 2022 season, nobody wants that.

“I just want to enjoy another day tomorrow,” Chun said. “Then I'm ready to go.”

She shot a three-over-par 75 on Saturday, not her best. All three players in the final group struggled. Lydia Ko, who shot 31 on the first nine on Friday, shot 39 over the same holes a day later. She battled back with a few birdies, and then finished with four consecutive bogeys, shooting 76. Jennifer Kupcho, who won the first major of the season, shot 74, missing a golden chance to pick up more ground. Only two players – Atthaya Thitikul (68) and Jenny Shin (69) managed Saturday rounds in the 60s.

Three players will begin Sunday three shots behind Chun, including Lexi Thompson, who is chasing after her first LPGA victory since 2019. On a tough day for scoring, Thompson shot two-under-par 70, as did South Korea’s Hye-Jin Choi. Sei Young Kim (71), also of South Korea, the 2020 KPMG champion, joined them at five-under-par 211. Chun, Choi and Thompson will play in Sunday’s final grouping. With an early television window on NBC (1-4 p.m.), players will tee off in threesomes off two tees.

Thompson is an accomplished player, an 11-time winner, who continues to put herself in contention, playing well dating to last summer. A week ago in Michigan, Thompson briefly took the lead on Sunday at the Meijer LPGA Classic before falling back and missing out on a playoff. She played brilliantly on the back nine on Saturday, shooting three-under-par 33, to give herself a chance to snap a 50-event LPGA winless streak.

Thompson, 27, is keeping things as simple as possible, and said she won’t be looking at any leaderboards on Sunday, instead just focusing on what she can control.

“Hopefully we get great weather, a lot of people, and the course is in great shape for us. I'm just going to enjoy every bit of it,” Thompson said.

A tougher day for Chun

On a blistering hot day outside the nation’s capital, Chun made three bogeys in her first 11 holes, but then seemed to steady herself with birdies at 12 and 14, getting back to 11-under-par, where she had started. But she made bogey at 15 and ran into bigger trouble a hole later, when she rushed a second shot, blocking a 3-wood, then pulled an 8-iron from the wispy rough that took off left and bounded into a bush. From there, she declared her ball unplayable, returned to the original spot, and hit 8-iron again, this time her ball bounding over the green. When she failed to get up and down, she walked off with double.

Players said the greens at Congressional were a little slower on Saturday, and players struggled with the pace. Dean Herden, the caddie on Chun’s bag, liked the way his player finished with two solid pars, which he feels gave her confidence to carry into Sunday.

“In Gee, I like how calm she is,” Herden said. “She’s been there before, and it’s no big deal. I think the key tomorrow will be to get off to a nice start. The first nine holes, if we’re a couple under par, I think we are doing fine.”

Learning from her experiences

Good or bad, Chun says she always learns from her experiences, and Saturday at Congressional was no different. She hit a few shots that were too good, she said, too solid, her ball finishing over the green. Every day is a different challenge, different experience. That’s why she loves golf.

“I always got positive memory from all my experience,” Chun said. “I just want to keep being positive. No matter where I am, just I'm ready to make another good day or another good round if I can. It's still another process, I believe, so just keep doing it.”

And through 54 holes, Chun has done it better than anyone.