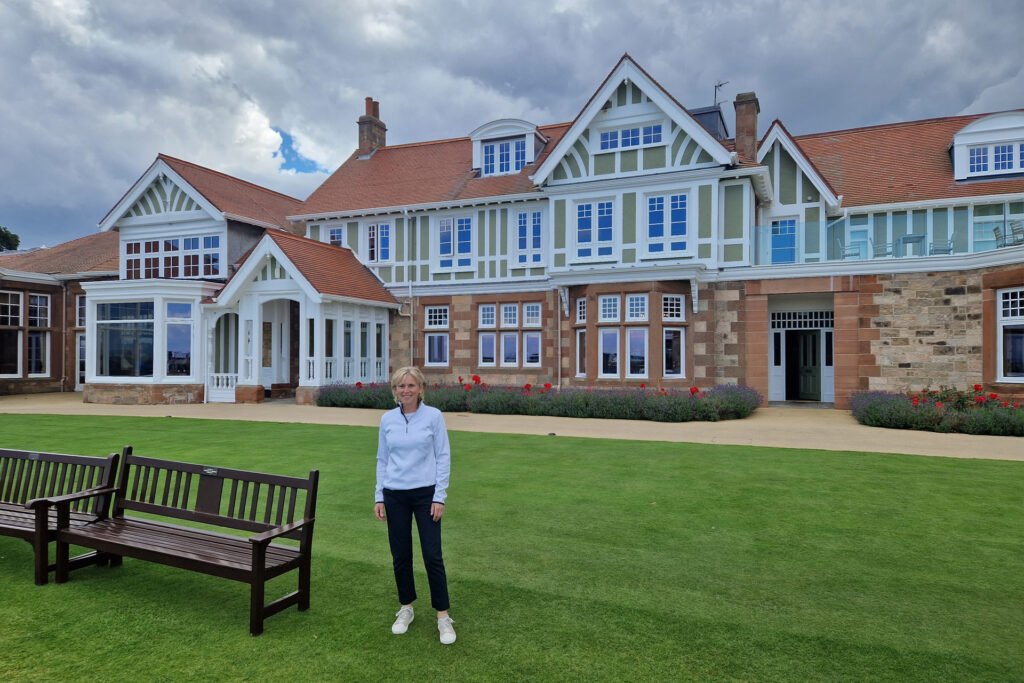 Lindsey Garden, a member of The Honourable Company of Edinburgh Golfers, was a playing marker for Lydia Hall. Here's why it's significant

As moments go, this one was pretty special and it’s difficult not to appreciate its significance. The first group off this Saturday morning on the third day of the AIG Women’s Open had a playing marker. Today that opportunity fell to Muirfield member Lindsey Garden.

It seems quite remarkable that only six years ago there weren’t any female members of The Honourable Company of Edinburgh Golfers. Now fast forward to 2022 and one is teeing it up at the first playing of a women’s professional event at this historic golfing venue.

It really couldn’t have been scripted any better from Muirfield’s point of view. Some may take a cynical view on how this played out but after spending time here this week, I really do feel it should be a moment that is celebrated.

As I sat and watched from a reasonably busy first tee stand, it felt like it was a perfect moment for Muirfield to show just how far they have come. In some ways, it had more significance to me than the inaugural tee shot hit by Catriona Matthew on Thursday.

Who is Lindsey Garden?

Lindsey Garden, who plays off 1.6, is one of 20 women members of The Honourable Company of Edinburgh Golfers and sits on the club’s Championship Committee.

Lindsey previously worked as a family lawyer at Brodies LLP and is now a safe guarder within the Children’s Hearing system. She has also held the role of Golf Development Officer for Glasgow City Council and been a member of the Scottish Golf’s Performance Committee.

A talented golfer, Lindsey was capped for Scotland at school and youth level before becoming a full international. She is a respected caddie, having been on the bag for the likes of Wayne Riley and Howard Clark. Probably her most notable time as a caddie was assisting Wayne Riley to victory at the Australian Open in 1991.

When asked by the Scottish Sun about becoming a member of The Honourable Company of Edinburgh Golfer, she told them:

“Some people have asked me why I would want to join The Honourable Company. And my answer is why would I not want to be a member at one of the best golf courses in the world?

“The actual course itself was absolutely first and foremost on my mind when I was invited to become a member.

“People have also asked if I see myself as a trailblazer and I absolutely don’t.

“I like the legacy thing - I’m a mum of two girls and I tell them that if you get the opportunity to go for something like this, you go for it.”

How did Lindsey's round with Lydia Hall go?

Lindsey had known for a few weeks that there was the potential that she would play if there was an odd number. That didn't make the first tee shot any easier, as she explained after her round:

“I played ok. Didn’t embarrass myself off the first tee. It was good I struck the ball nicely. If I had topped it off the first tee then I would have swapped it for anything but it went off ok, so there after it was fine.

"I was delighted to be asked. It was thoroughly enjoyable but at the same time nerve wracking. It’s been a fantastic Championship and I was honoured to play a small part.”

I know Muirfield is far from perfect and I know there is still an undercurrent of bad feelings about the reasons why the AIG Women’s Open was awarded to this venue so soon after the controversial vote. However, this week and this morning showed us all that even at one of golf's oldest male-only institutions, changes can be made and that change is always for the better.