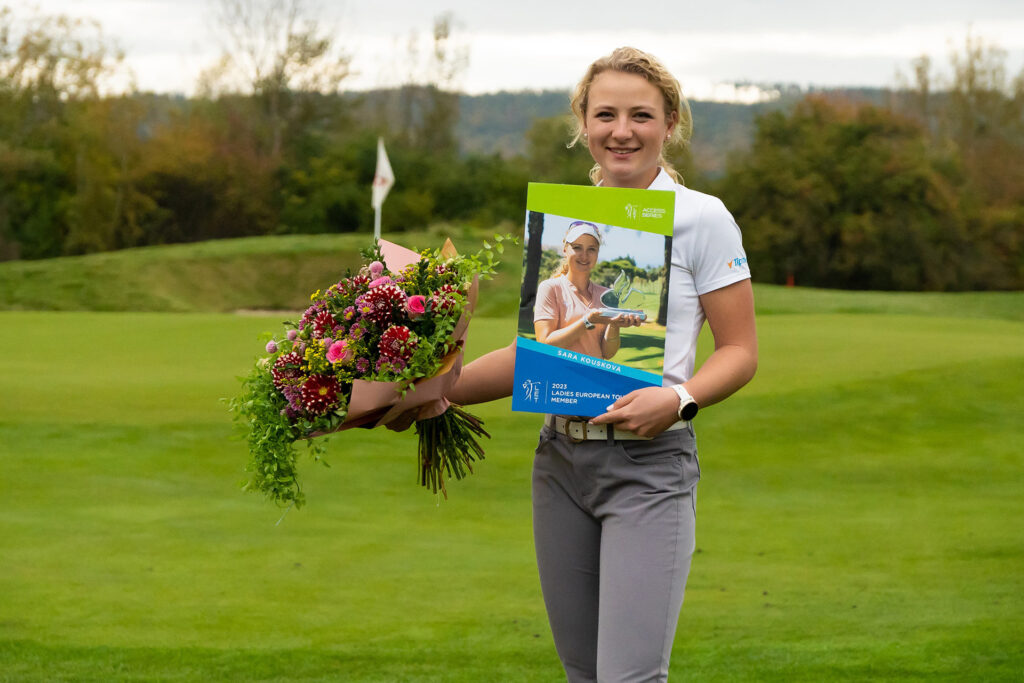 Following the conclusion of the 2022 LETAS season, six players have earned a promotion from the LET Access Series to the Ladies European Tour for the upcoming year.

Sara Kouskova from the Czech Republic, Chiara Noja from Germany, Momoka Kobori from New Zealand, Patricia Isabel Schmidt from Germany, Lauren Holmey from the Netherlands, and Anna Magnusson from Sweden will play on the Ladies European Tour in 2023.

Kouskova (pictured above) came top of the rankings after a fabulous season, having played in ten LETAS events and clinching three victories along with two runner-up and three further top-10 finishes.

“Each of my victories was different but I really appreciate every single one of them. I learned so much this year and I am looking forward to implementing everything in 2023 when I will be competing with the best golfers in Europe and beyond.”

The Czech star, who won her first LETAS title as an amateur in 2021, secured her first professional win at Santander Golf Tour – Malaga in August after a phenomenal comeback round of five-under 67.

Kouskova added a solo fourth place at the Goteborg Open before adding back-to-back victories at the Elite Hotels Open and the ASGI Lavaux Ladies Open.

Ties for third and second at the Rose Ladies Open and Santander Golf Tour – Burgos, respectively, secured her win on the LETAS Order of Merit as well as the Rookie of the Year rankings.

“I am happy I chose to play on LETAS this year, it ended up being the best decision. But actually winning the Order of Merit and the Rookie of the Year rankings seemed like a dream back in June but now it's an enormous reward for all the hard work my team and I have put in.”

Germany’s Chiara Noja started the LETAS season on a high with a runner-up finish at the season opener Terre Blanche Ladies Open in France.

The 16-year-old sensation overtook the LETAS Order of Merit’s leading position after a tremendous nine-shot win at the AMUNDI Czech Ladies Challenge with a total score of -12 for the tournament.

“It was definitely a very long season and a season of ups and downs. I got my first professional win so nothing I can be mad about in that sense, it was rewarding and nice to get it all done in one go.”

Noja added five top-10 finishes in the next five starts on LETAS including a runner-up finish at the Golf Vlaanderen LETAS Trophy.

Four more top-10 finishes with a T3 place at her last tournament on LETAS at the ASGI Lavaux Ladies Open had the Dubai-based teenager take the second place on the Order of Merit and secure the LET Card for next season.

“Being able to get my LET Card now sort of proved to me and hopefully everyone else that I can do it and I deserve to be here. I’m definitely glad I don’t have to go to Q School and can now focus on my studies during the off-season.”

Kobori came to Europe for the first time ever in June, gaining an invitation to the Montauban Ladies Open in France.

The Kiwi stunned the field with her game and clinched the win by three strokes and also secured the LETAS winners’ category for both the 2022 and 2023 seasons.

“My original plan was to go to Q-School in the USA and only spend a few weeks in Europe. But once I came here and learned about the pathway to the LET that LETAS has for us, it just made sense for me to stay and I'm so glad I did.”

En route to getting her 2023 LET card, the Pepperdine graduate finished within the top-10 in her next two starts, raised the trophy once again at the Hauts de France – Pas de Calais Golf Open, and then added six top-10 and two top-20 finishes in the second half of the season.

“Golf-wise, the highlight of the season has to be my first win in Montauban as it opened up a whole new pathway to the LET.

“But overall, the amount of friendships and memories I made this season on LETAS has got to be one of my highlights. I've been so lucky to meet so many amazing girls on Tour and I'm excited to come back and see everyone again next year.”

Schmidt was the only player to play all 19 events this season in which she had her first LETAS win, and two runner-up finishes at the Flumserberg Ladies Open and the Trust Golf Links Series – The Musselburgh GC.

Her maiden triumph came after a couple of top-10 finishes as she overcame five rivals to become the Big Green Egg Swedish Match Play Champion.

“My biggest highlight was obviously the Match Play win and a whole week around it because it was my first win and I'm sure nobody ever forgets that. But the whole season and actually getting the LET card is a massive highlight in my career.

“Another big experience was playing in the final group for the first time this year. Just to get used to that situation and feel comfortable.”

Lauren Holmey competed for the majority of the season as an amateur when she secured her first win in a professional tournament at the Flumserberg Ladies Open, which was only the third LETAS tournament of her young career.

“The runner-up finishes were during the six-week tournament stretch. I really enjoyed this time in the season and it's a memory I feel proud of.”

The young talent decided to become a professional in late September, having competed in the last two events of the season for her first pay checks.

“I really wanted to approach the last few weeks just like the rest of the season. Focus on my own game do my best and eventually keep learning every day.

“It was still my first time playing so much and with such a big and specific goal in mind it was a little more challenging physically and mentally but overall, we had fun on and off the course.”

Magnusson clinched the sixth and final spot on the LETAS Order of Merit that secures the 2023 LET card after a consistent season with three third places, three further top-five, and two more top-10 finishes.

“The last few weeks have been stressful, and I tried telling myself I can't affect how others will play, just focus on myself and what I can do which is to play good golf.

The Swede had a target on her back during the final Spanish stretch and proved her resilience with a T5 finish at the Santander Golf Tour – Burgos and another solid finish in the final tournament of the season in Calatayud.

"I'm happy with how I played in Lerma and how I handled the situation coming into the final stretch. I am so excited to play on the LET next year!”

In addition to the six players on the LETAS Order of Merit earning their LET cards, a further 15 LETAS players also progressed to the Final Stage of the LET Qualifying School, which takes place over the Reals Golf La Manga Club, Spain from 17–21 December.