Weekly Tour round-up: Getting into form ahead of the Majors 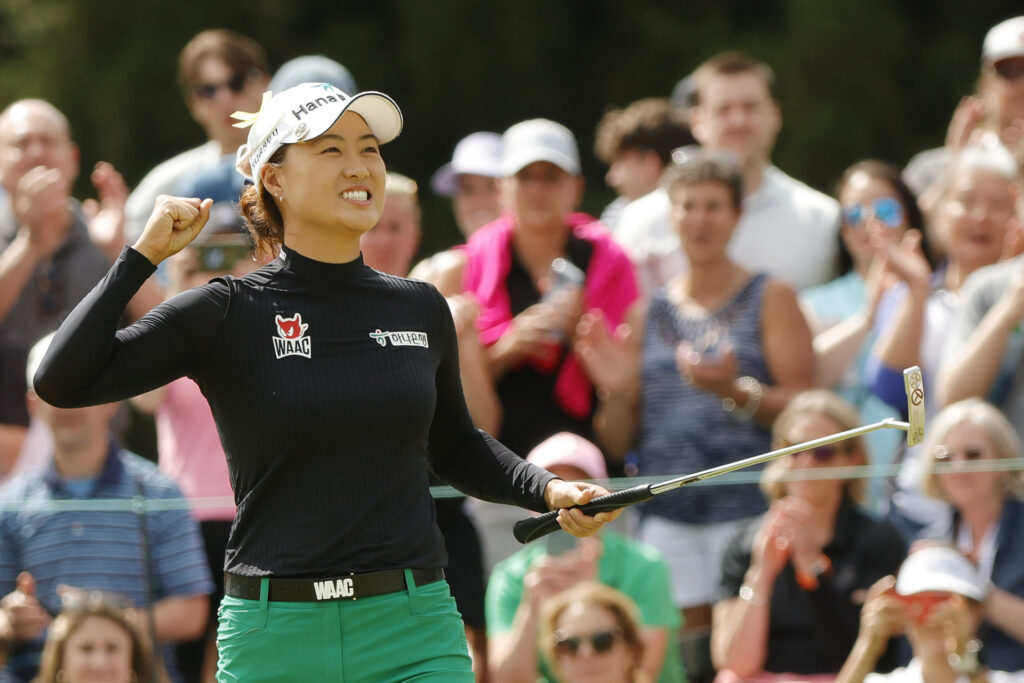 It was a hard-fought final day at the 2022 Cognizant Founders Cup, as Australian Minjee Lee manged to covert her 54 hole lead into her seventh LPGA Tour title and the first since her maiden major championship win at the 2021 Amundi Evian Championship.

The 25-year-old finished on 19-under-par, two shots clear of Lexi Thompson. After her victory she said:

“I fought really hard this whole day, and to finish with a couple of birdies and just to come out with a win is just really special. I'm really happy.”

Lee got off to a shaky start but credited her calm demeanor and approach as she grinded her way around Upper Montclair Country Club. Eight pars, including a short, missed birdie putt that lipped out on No. 4 and a bogey on 8 caused Lee to make the turn at +1 and -16. The bogey was a gift after an “average” tee shot and a second shot that found the rough above the bunker, and it took Lee two attempts to get back on the green.

Lee’s birdie on 12 got her back in her groove, and after being tied with Thompson, she retook the lead after carding another birdie on 14. A closing birdie on 18 was the chef’s kiss on a win she said was the hardest she’s fought for in her career.

Thompson finished the weekend in solo second, after a bogey-free 69 put her at -17 overall. It is her third runner-up performance since the 2021 Pelican Women’s Championship, and her second top-four finish in her last three starts. Madelene Sagstrom and Angel Yin tied for third at -16, with Yin posting a 5-under 67 on Sunday to earn her best result since a tie for third at the 2021 Honda LPGA Thailand.

Sagstrom fought back after a triple bogey on the third hole with three birdies on her final nine to get back to even and record her third-straight top-10 finish. Carlota Ciganda blazed through the New Jersey track with an 8-under-par 64 to move to solo fifth, while Nasa Hataoka and Megan Khang finished up in a tie for sixth.

LPGA Tour rookies Atthaya Thitikul, who shot a final round nine-under-par 63, and Hye-Jin Choi tied for eighth at -13, while Jenny Shin rounded out the top 10 (10th) at -12 after a fourth-round 67. Defending champion Jin Young Ko finished T17 at -8 and sponsor invite, ANWA Champion Anna Davis secured her career-best finish on Tour, a tie for 50th at -3.

Attention is starting to turn to the U.S. Women’s Open which takes place at Pine Needles Lodge and Golf Club in two weeks. There is a week off this week and next week it’s a change in format at Ally Ewing looks to defend her Bank of Hope LPGA Match-Play title.

The Aramco Team Series is back for 2022, with the first of five events taking place in Bangkok.

This year there will be a revised format. For the team event there will be 26 teams of four (3 professionals and a lucky amateur) competing over the first two days only with the best two scores on each hole counting with a $500,000 prize fund up for grabs.

The individual strokeplay event will run concurrently with the final round for individuals who make the cut playing in a last day shootout with another separate $500,000 on offer.

Played across three days rather than the traditional four. The team event would complete on Friday whilst the individual on Saturday.

It was Team Hillier who triumphed at the Aramco Team Series – Bangkok as they recorded a final round of 15-under-par to secure a three-stroke victory at Thai Country Club. It was a first LET title for Hillier and Chayanun, while it is back-to-back victories in the Team event as Bakker was part of Team Pedersen in Jeddah last November. Read the full report here.

In the individual competition, Belgium's Manon De Roey won her first LET title. Going into the final day two shots behind the leader, but equalled the course record by firing a bogey-free 66, six-under-par, to win with a total of 13-under-par. Another victory by three shots. Read the full report here.

Attention now slightly shifts to the U.S. Women's Open with qualifying taking place at the LET HQ The Buckinghamshire on Monday, May 16. Followed by the Jabra Ladies Open at Evian Resort, offering a warm-up before the tour returns there for the fourth Major of the season The Amundi Evian Champions in July.

Dutch amateur Lauren Holmey became the 2022 Flumserberg Ladies Open champion after a final day round of 70 was enough to seal the title by a single shot in Switzerland.

The 19-year-old, who was playing in just her third LETAS event, was one shot behind overnight leader Nikki Hofstede at the start of the day, but kept her cool as her compatriot faded away to seal the victory at GAMS-Werdenberg Golf Club.

Fourteen straight pars to begin her round saw the 2020 Dutch National Stroke Play champion hang in at the top of the leaderboard, before back-to-back birdies on the 15th and 16th were enough to see her over the line.

“It felt really good to get my first win in a professional tournament, I’m really happy!

“I had my dad caddying for me today and we learned a lot over the last few tournaments, and I think we made a really good team this week so that was nice.

“I changed my clubs a few months ago and I had a hard time adjusting, they’re quite different clubs so I was a little lost for a bit, but now I feel really good with my game.”

One shot behind Holmey was Germany’s Patricia Isabel Schmidt, who rattled in eight birdies and an eagle on the way to a score of 66, six-under-par, on the final day.

It looked like the 26-year-old was out of the running after dropping four shots on the second hole, but her resilience was put to the test and she came through with flying colours, as she didn’t drop a single shot after that, going nine-under par through her next 16 holes, including birdies on each of her last four.

Sweden’s Anna Magnusson finished third on -6 after a final day score of 70, albeit having reached -8 with a birdie on the 13th, only for two bogeys on her last five holes to see her drop back into the pack.

In the LETAS Order of Merit, Holmey moves up to second on 500.00 points, just behind Italy’s Lucrezia Colombotto Rosso who has 534.00 after winning the Terre Blanche Ladies Open earlier in the season and securing a T23 finish in Switzerland.

The next LETAS event is the PGA Championship Trelleborg which takes place on May 19-21 at Tegelberga Golf Club in Sweden.

It was a third DP World Tour title for England’s Sam Horsfield after he secured a two-shot victory, finishing on 13-under-par at the Soudal Open in Belgium.

A final round 68, which included four birdies and one bogey, was enough to give the 25-year-old his first victory since 2020.

He beat overnight leader Ryan Fox, who had to settle for second place. It wasn’t to be for Fox whose round of level par, which included a bogey on the final hole, meant he couldn’t add a second title to his 2022 season.

On his victory and having his girlfriend on the bag, Horsfield said:

"I was trying not to cry while I was over that little tap-in! Having Issi on the bag, it has been an amazing week. Mick (his regular caddie) is not here but I wish he was. I said yesterday I wanted to do it for him and I was able to, so I'm just so happy."

This week is all about the PGA Championship at Southern Hills where Horsfield can take a lot fOf confidence into the second Major of the season.

K.H. Lee secured his second PGA Tour title and his second AT&T Byron Nelson, after defending his title and winning by one shot over home favourite Jordan Spieth.

Lee carded a bogey-free 63 which saw him finish on 26-under-par, breaking the tournament record that he set last year. This was the first back-to-back victory since Tom Watson in 1980.

It’s safe to say that the expectations weren’t high for the defending champion after his form has dipped over the last year, only having one top 10 finish in that time.

After his win the 30-year-old told Sky Sports:

"It feels amazing. I've struggled with my game the past couple of months and I've had no top-10s this year, but when I'm here I'm more comfortable and more confident. I've tried my best and maybe being here has helped me."

Hopefully, he’ll take this renewed confidence into the second Major of the season which starts on Thursday at Southern Hills Country Club.

We must also give a mention to Ryder Cup-winning captain Steve Stricker who won his fourth senior Major title by going wire-to-wire victory at the Regions Tradition in Alabama.

On the final day, Stricker carded a four-under-par 68 at Greystone Golf & Country Club to finish on 21-under-par and six shots clear of his closest competitor. That competitor happened to be Padraig Harrington, the rival captain for last year’s Ryder Cup.

The win comes after Stricker suffered from a mystery illness a month after his Ryder Cup team’s victory. An illness that saw him lose over 25lbs. This was only the third event that the American has been able to play in since taking a six month break.

Understandably the 55-year-old was emotional after his victory, he said:

"It's been a long time. I hate crying, but where I was last November and even a couple of months ago. To come full-circle here, it means a lot."

It’s great to see Stricker back on the course after such a worrying time.