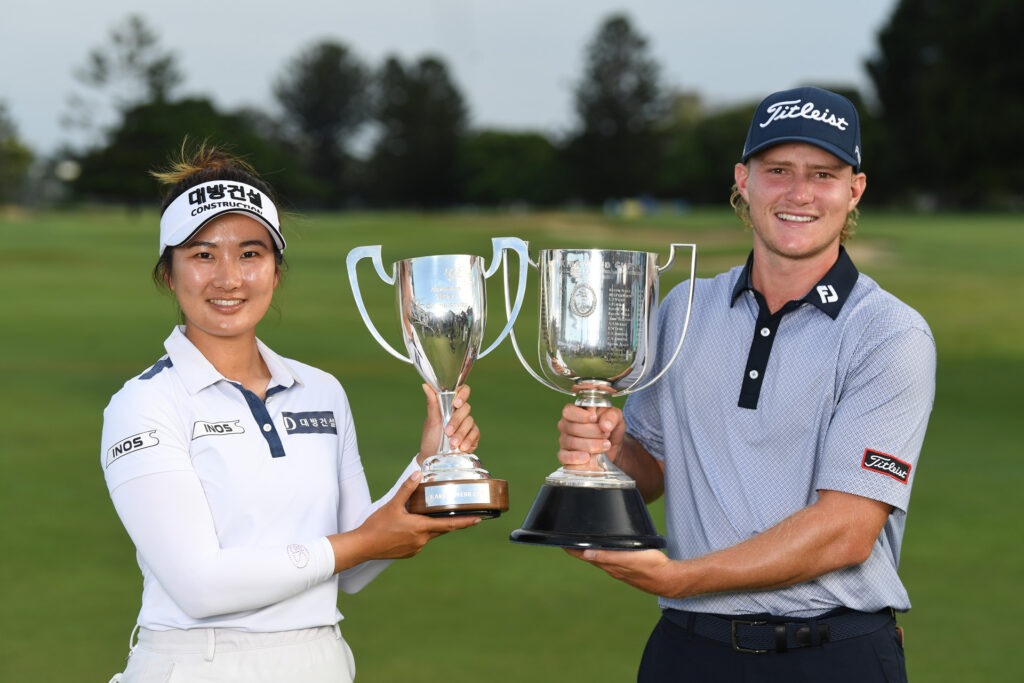 Here's what happened when the women and men took to the fairways of Royal Queensland, competing for separate trophies but equal first prize money.

What was even more special for the women’s event was that they would be playing for the Karrie Webb Cup, a trophy that had been designed by the seven time major winner.

The events gave the opportunity to showcase both men and women at one of Australia’s most prestigious golf clubs and both winners were playing for equal prize money - $180,000.

Hannah Green, 2019 KPMG Women’s PGA Championship winner, was meant to headline the women’s field but due to Covid restrictions in her home town in Perth, she wasn’t able to attend. The event was also hit by Covid positive test results which ruled out Sarah Kemp and Steph Kyriacou.

The field changes due to Covid meant that Melbourne’s Su Oh became the top-ranked player and it’s safe to say her play matched her ranking. She finished with a final round of 68 to add to her other rounds of 66, 72 and 68 to reach 10-under-par and win by four shots from Sydney professional Grace Kim.

The 25-yearold was thrilled by the breakthrough and the significance of winning a trophy with Webb’s name on it for the first time. She sais:

“I can’t wait to celebrate with her. It’s such an honour to put my name on the Karrie Webb Cup.

“I will get a bit of confidence in myself out of this, knowing I can get it done. There’ll be a US (LPGA) win, hopefully, this year.”

In the Fortinet Australian PGA Championship, Jed Morgan dominated the event. The 22-year-old equalled the tournament record of 22-under-par and broke the championship’s biggest winning margin, previously eight shots held by Hale Irwin and Greg Norman, beating Andrew Dodt by a remarkable 11.  He is also the youngest winner of the tournament in 60 years, putting together rounds of 65,63,65 and 69 at a course he knows all too well as a club member.

With the win, he secures three starts on the current DP World Tour, and most likely, a full card for the 2022-23 season in Europe.

Talking of his win, Morgan said:

“It’s something else. I was thinking about it on Wednesday, and I was like ‘I really hope I make the cut’, because I’d hate to miss the cut at my home track and not put on a good show.

“To have done what I’ve done with my team is so sick.”

Oh commented on the significance of holding the championships together:

“We need more tournaments like this with men and women playing together for separate trophies.

“I saw quite a few girls out on course and getting more interested would be great.”

WPGA Tour of Australasia Chief Executive Karen Lunn said she was delighted with the success of the women’s and men’s events being twinned at Royal Queensland. She said:

“I felt the event was really well received. The women and men playing together is the recipe that the market is telling us it wants.

“It’s a positive at government and sponsor level and the girls and guys enjoy playing alongside each other.

“It was really great to showcase the best players on the Australian tours this past week.

“It’s significant for women’s golf to launch the WPGA Championship because we want it to sit beside the Women’s Australian Open. They will be the two premier tournaments on our schedule.”

You can view the full leaderboards here.

Japan's Hideki Matsuyama won his second event of the PGA Tour season at the Sony Open in Hawaii. After recording a final round 63, he forced a play-off with American Russell Henley.

Matsuyama produced this phenomenal shot on the first play-off hole, which he then eagled to win:

We're looking forward to the return of the LPGA Tour this week at the Hilton Grand Vacations Tournament of Champions in Orlando, which was won last year by Jessica Korda.