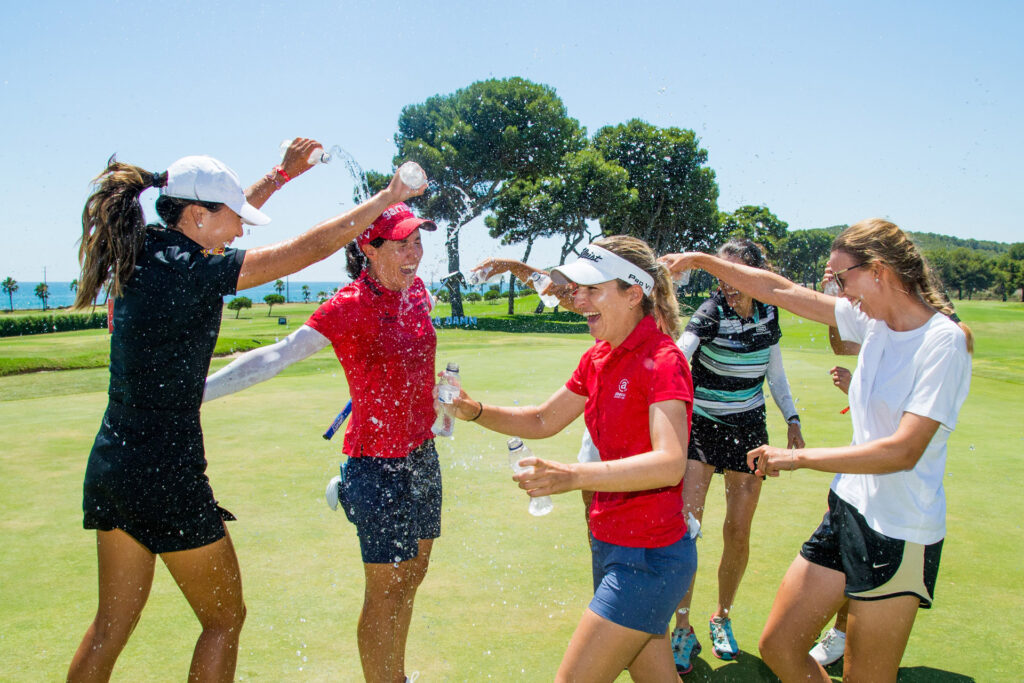 Two wins in a row on home soil for Carlota Ciganda, as four players secure the final spots in the 150th Open field.

The Spanish star, who had previously won the event in 2019, held a four-shot advantage heading into the final round and seemed to be on the cusp of a comfortable victory, but the five-time Solheim Cup player said afterwards, “Winning is never easy,” and she had to dig deep to hold off the chasing pack.

Argentinian Magdalena Simmermacher, who began the day five shots off the pace, picked up shots at the first and third holes and then made a run of four straight birdies from the eighth through to the 11th to gain the outright lead after Ciganda double-bogeyed the ninth hole.

However, a three-putt bogey from Simmermacher on the long 12th hole ended her rally and from that point, Ciganda fought for every single shot and cries of “Vamos” echoed around the course.

A relieved Ciganda was on cloud nine after lifting another title on home soil, having also won the Andalucía Costa del Sol Open de España in November. She said:

“Winning is never easy. looked at the leaderboard on 11 and I just thought, if you do what you need to do, you are going to be fine. I didn’t look too much, but I did see on 17 that I was two or three ahead, so that was nice.”

Scotland’s Laura Beveridge, who fired a 66, ended two strokes behind for her career best finish of second, a week after her tie for fourth in the Amundi German Masters.

Simmermacher and Elin Arvidsson of Sweden finished in joint third on 15-under-par. Sweden’s Maja Stark finished in solo fifth place, extending her lead in the season-long Race to Costa del Sol, while Manon de Roey of Belgium ended in sixth with a further four players in a tie for seventh position: Anne Lise Caudal of France, Lydia Hall of Wales and Spanish pair Ana Pelaez Trivino and Nuria Iturrioz.

This week is the Big Green Egg Open at Rosendaelsche Golf Club in the Netherlands.

The 18-year-old started her round with a birdie on the first hole after which she added two more and dropped three strokes on the front nine to make the turn in 37 shots.

The Thai talent had one more bogey on the 11th hole and swiftly erased that with a birdie on the 12th to finish the round at even-par and secure her maiden win in Europe.

“It means a lot to win in Europe and I am very happy with my game. I felt really confident today and I knew I could make it,” said the Thai LPGA member.

The winner, who fired a spectacular second round of nine-under 64 to put her in a comfortable lead clinched an eighth consecutive win and will aim high at next week’s Trust Golf Links Series at The Musselburgh Golf Club.

“I am excited to go to Scotland next week and this win gives me a lot of confidence as I know I can win in Europe and especially in the windy British conditions.

“I am going to celebrate the triumph tonight with my friends and we will go to the best Thai restaurant in town. I really cannot wait!”

In outright second place is her compatriot Arpichaya Yubol who carded the round of the day of five-under 68 to finish three shots back at -8 for the tournament.

Germany’s Chiara Noja claimed the solo third place shooting a final round of two-over 75 and regaining the top spot on the LETAS Order of Merit.

The low amateur of the tournament was England’s very own Jessica Hall who finished at a total of -2, sharing fourth place with Wales’ Jordan Ryan.

Australia’s Stefanie Hall, Sweden’s Sara Kjellker, and Scotland’s Tara Mactaggart all ended up a further shot back to tie the sixth spot.

Tina Mazarino of Norway took an outright ninth position at level par while Thailand’s duo Cholcheva Wongras and Trichat Cheenglab shared the tenth to round out the top 10 at two-over-par.

As the Dubai-based teenage star Noja claims back the top position on the LETAS Order of Merit with 1,494.25 points, the top six names on the rankings remain without change.

Rookie Jordan Ryan jumped up the most spots on the rankings as she went from 103rd place to 31st after her top-5 finish this week.

The LET Access Series will continue with the Trust Golf Links Series at The Musselburgh Golf Club.

Xander Schauffele wins ahead of the 150th Open

Kurt Kitayama, Jamie Donaldson and Brandon Wu secured their places in The 150th Open at St Andrews after qualifying through the Genesis Scottish Open.

Played at The Renaissance Club in East Lothian, the Genesis Scottish Open was the 15th event in The Open Qualifying Series, which gives golfers around the world opportunities to book their place for the historic occasion at St Andrews this coming week.

In glorious final day conditions, the DP World Tour event was won by the already exempt Xander Schauffele after the American posted a winning total of seven-under-par 273, becoming the winner of the first event co-sanctioned by the DP World Tour and the PGA TOUR. It was also Schauffele's third success in-a-row, after the Travelers Championship and JP McManus Pro-Am, as his form continues ahead of the challenge of the Old Course.

It was a tough final day for Schauffele, who after starting the day with a two-shot lead, was one shot behind Kitayama at the turn. However, Kitayama bogeyed the 17th and birdies at 14 and 16 were enough, even with a bogey at 18, for Schauffele to take the title.

Kitayama finished just a stroke behind after posting a clubhouse target of six-under-par thanks to a four-under 66, aided by four birdies in his first seven holes. The American, a two-time winner on the DP World Tour, will be making his third Open appearance as the 29-year-old aims to make the cut for the first time.

Donaldson, Europe’s Ryder Cup hero at Gleneagles in 2014, made three birdies in four holes from the 12th to secure his spot at St Andrews after finishing on three-under after a 67 and a tie for sixth place. The Welshman, 46, felt a bogey at the par-5 16th could have proved costly but he did enough to secure a seventh appearance in The Open and his first since 2016. He tied 49th at the last Open in St Andrews in 2015.

On The Renaissance Club’s tough closing stretch in the later windy conditions, it was Wu who benefited after the American, 25, posted a three-under total two-and-a-half hours before the leaders had finished. Dane Rasmus Hojgaard and the USA’s Alex Smalley both bogeyed the 18th to allow Wu, who closed with a 67, to secure only a second Open appearance.

The Open Qualifying Series concludes with one place available at the Barbasol Championship which finishes later today.

It doesn't need pointing out that all eyes will be on the 150th Open championship this week at St Andrews.

Trey Mullinax won his first PGA Tour and DP World title and booked his debut at the 150th Open after a holing a 15 foot birdie at the last to secure victory by one-shot.

Starting the day three shots behind overnight leader Matti Schmid at the Barbasol Championship at Keene Trace Golf Club in Kentucky. The 30-year-old matched his three-under-par front nine with three birdies in the last six holes to post a six-under-par 66 and finish on 25-under-par.

After his victory, the American commented:

For the second time this season, Lucy Li walked away as a champion. Li dominated the notoriously hard Pinehaven Country Club, finishing the weekend 10-under-par 203.

“It’s definitely really exciting to get my second win here.”

Throughout the week, Li had a crowd supporting her. As No. 1 in the Race for the Card, this wasn’t unusual. The community support means a lot to Li, however, certain people have been there through the highs and lows which means the most.

“Having the support of your family, for me was huge. I can say that they never stopped believing in me, even when at some points it feels like you stop believing in yourself.”

The California native carded three birdies on Sunday and went bogey-free on the back nine.

In solo second place, four strokes behind Li, was Linnea Strom. The Swede shot one-under-par on the day and six-under-par on the weekend. She recorded two birdies and a lone eagle on 17, her second of the week, to secure her second-place finish.

“I knew Lucy was a couple shots ahead of me,” said Strom. “In my mind I just wanted to finish solo second, which I was able to do, so I’m happy about that.”

This is Strom’s third top-10 finish of the 2022 Epson Tour season. She says it’s nice to have a crowd following and cheering her on.

Taking solo third, at four-under-par, is Allie White. The Ohio native earned her highest finish of the 2022 season after missing eight of 10 cuts. Her three-under-par final round consisted of seven birdies.