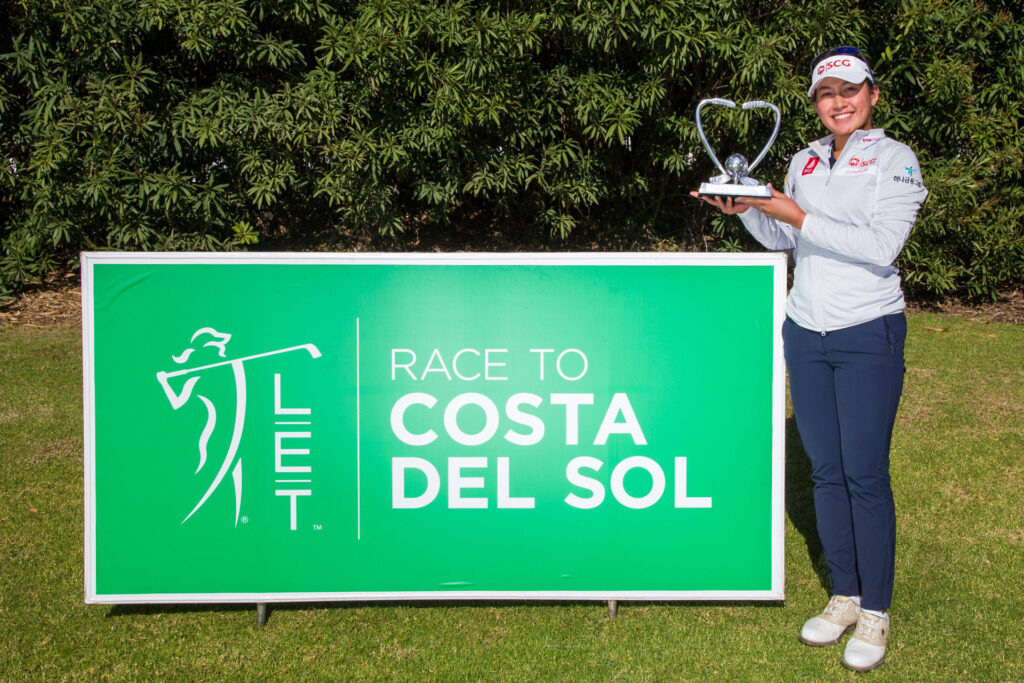 The Ladies European Tour (LET) brought their season to a close at the Andalucía Costa del Sol Open de España. The tournament belonged to home favourite Carlota Ciganda who started the final round with a three-shot lead and her win never looked in doubt as she fired a final round 67 to finish at 15-under-par.

The 31-year-old became the second Spanish player to win the Andalucía Costa del Sol Open de España as she recorded a four-shot victory and her fifth LET title at Los Naranjos. This was her first win on the Ladies European Tour since the 2019 Estrella Damm Mediterranean Ladies Open.

Commenting on her win, Ciganda said:

“I’m very happy, it’s a tournament that I really wanted to win. I love Spain and to win your country’s tournament is something very special so I’m happy with the way I played.

“It’s hard to explain, I get emotional because I love Spain and I love my family, so it’s just amazing to win this week.”

Top five in the Race to Costa del Sol

There was more than just a title at stake in Spain as LET members looked to secure cards for 2022 and for the top five players in the Race to Costa del Sol – a chance to take part in LPGA Q-series which starts this week.

One player vying for a top-five place was Sweden’s Maja Stark, who has had a phenomenal start to her professional career since turning pro in August. The two-time LET winner in just seven starts in 2021, finished in second place after posting a bogey-free final round of 66 (-6) to finish on 11-under-par.

Unfortunately, it wasn’t quite enough to lift her into the top five and she had to settle for sixth place in the order of merit. The 21-year-old said:

“Coming so close to the top five (in the Race to Costa Del Sol) stings a little bit, that was my goal for the week - I knew I had to win and nothing else was on my mind. It was close but Carlota played great so you can’t be unhappy with it, I’ll just try again next year.

“I knew what I had to do but I didn’t go the whole way, but not making any bogeys on the final day of a tournament when you’re going for every pin, I think is still pretty good.”

Atthaya Thitikul the best in Europe

The 2021 Race to Costa del Sol had already been won by Atthaya Thitikul but, yet again, she put on a fantastic display of golf to finish in third place.

At just 18-years-old she won the 2021 Race to Costa del Sol by 1,638.07 points! In what has been a remarkable first season on Tour, Thitikul had an amazing record on the golf course only finishing outside the top six in individual events on three occasions.

Following in the footsteps of Dame Laura Davies, Carlota Ciganda and Esther Henseleit – the Thai talent becomes the fourth player to win both the Race to Costa del Sol and Rookie of the Year titles in the same season.

Thitikul also became the youngest winner of the accolade surpassing Charley Hull’s previous record and was delighted to be able to play in the Costa del Sol region last week. She said:

“It’s been a rollercoaster this year, I feel really great and honoured to be the Race to Costa Del Sol number one, as it’s my rookie year as well, it’s been a great year for me on the LET.

“It is really amazing for me this year. People might say I’m successful already, but this is only the start. My goal is to get better every single day, I don’t want to just win tournaments, I want to get better in my game. You win the tournaments, but you still need to improve.”

Ranked 22nd in the World

The Thai professional has amassed two further LET titles this year winning at the Tipsport Czech Ladies Open and VP Bank Swiss Ladies Open, adding to the two titles at the Ladies European Thailand Championship in 2017 and 2019 that she won while still an amateur.

“Atthaya is a deserving winner of the 2021 Race to Costa del Sol title and we are delighted to present her with the award. She has proved to be the model of consistency in her first full season on Tour and this title is further reward for the hard work she has put in to become a champion. I would like to thank the Costa del Sol Tourist Board for their unwavering support, and we are looking forward to the 2022 season already.”

With her first full LET season complete, the teenager now heads to the United States to the final stage of LPGA Q-Series where she will try to secure her LPGA Tour card. Joining her are Australian Stephanie Kyriacou who moved up to third, Sanna Nuutinen in fourth and Olivia Cowan in fifth. Pia Babnik who finished in second with 1.953.89 points qualified but the 17-year-old isn't on the start sheet for the LPGA Q-Series.

The LPGA Q-Series begins this week at Magnolia Grove in Alabama. We’ll have more on this later on in the week. Whilst LET Q-school pre-qualifying takes place at Real Golf La Manga Club from December 9-12.

View the LET Rookie of the Year standings here.