Asian dominance: A changing of the guard? 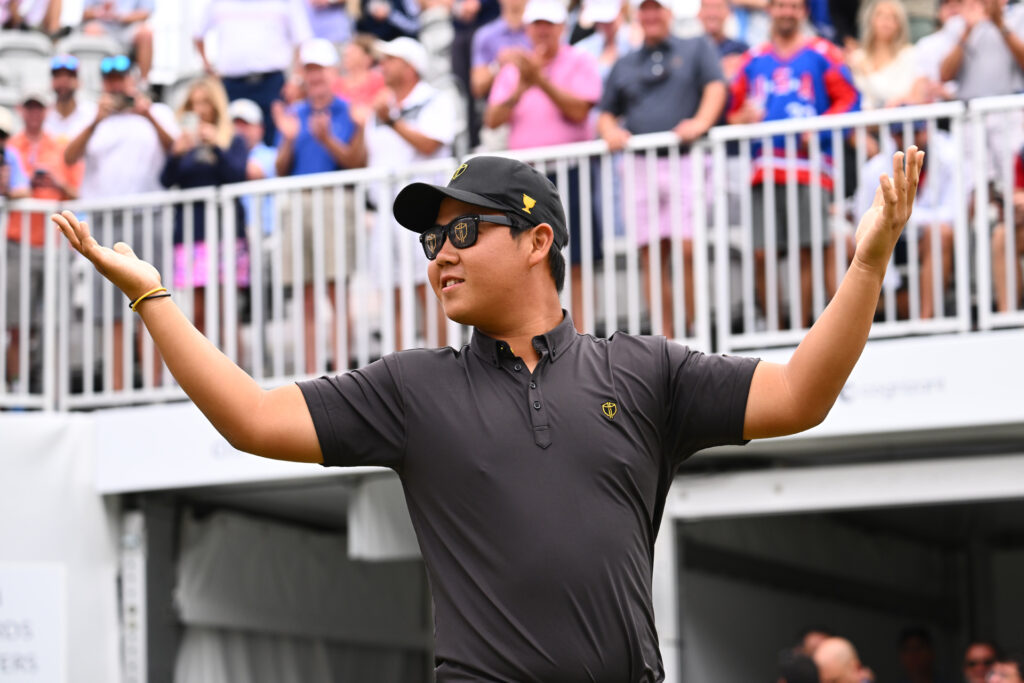 The International Presidents Cup team treated us to a fantastic spectacle at Quail Hollow in September. The main takeaways were a potential re-jig of the scoring system, Tom Kim bursting onto the world stage, and despite a foregone conclusion in the US emerging victorious, an International challenge far greater than most had expected.

The demand for rising Asian stars in the men’s game can be juxtaposed against the emergence of improved European golf in the face of the monopoly that Asia possesses in the women’s game. Just as the focus on golf as well as character comes to the fore in the modern game, we yearn for more figureheads to keep us entertained in these battles between the world’s best.

We've been treated to a glimpse of the potential of Asian golfers making big statements in the men’s game. Anthony Kim took the game by storm back in the 2000's, and still remains a fan favourite, despite sightings being as rare as Bigfoot himself. Ryo Ishikawa was supposedly the next best thing, winning on the Japanese Tour before he turned 16.

Y.E. Yang caused one of golf's biggest ever upsets when he stared down Tiger Woods and got his hands on the 2009 PGA Championship, then a third at the 2011 US Open. All have faded since. Despite impressive golf from Si Woo Kim, Sung Jae Im and Hideki Matsuyama since – we still know much more about the likes of Rickie Fowler and Brandt Snedeker than a whole host of successful golfers inside the world's top percentile, all hailing from the Eastern hemisphere and ready to compete. They are here, and have been for a while.

At just 20 years old, Joohyung 'Tom' Kim is able to connect with fans in a deeper way. South Korean born, lived in China, Thailand, Australia and the Philippines, he is a well-travelled soul, on the way to becoming a global star. With all the talk of sporting role models and growing the game, this can only be a good thing. Harold Varner III cites Tiger as a hero, seeing 'someone do those things who looked like me'.

It could be his boyish, youthful nature. Maybe just the freakishly good iron play. But most importantly, Kim’s understanding of the Western golf fan culture coupled with a command of the language. Playing along with crowd jeers during his opening practise swings at Quail Hollow went a long way in winning over the opposition, and fist-pumping a halved putt in when he was five down turned a few heads at the Presidents Cup. We love a fighter.

Having more strong characters hailing from other parts of the world will bolster the International Presidents Cup team; doing more to spice up the event, selling tickets, and creating memories than a rehash of the format could ever achieve.

On the other hand, the female professional game has been dominated by Asian golfers for some time, the better part of the 21st Century.  We are well aware of their prowess, their track records speak for themselves. But as such, we do not really know them.

The near-perfect swings of Minjee Lee, Inbee Park, In Gee Chun and Jin Young Ko that have filled the major winners list for years are a joy to watch and a nightmare to oppose. These players consistently deliver astounding fairways and greens in regulation numbers, matched by a well-manicured interview afterwards. These traits make them accomplished winners but not well-known fan favourites on a global scale. Fans can warm to Tom Kim’s more erratic, flamboyant nature as opposed to his female counterparts; and suddenly Korea does not seem so far away.

In all the analysis of LIV Golf causing fracture by challenging the PGA Tour monopoly, it is clear that the aforementioned female monopoly on golf from the East is being challenged. As more European names have entered the top levels of the world rankings, we see more European stars securing LET and LPGA wins and contending in major championships.

A challenge to the East?

Sweden’s Linn Grant just received the LET Rookie of the Year award despite three events remaining, becoming the eighth Swede to capture the title. Maja Stark was in contention at a handful of the majors as an amateur in 2020 and 2021, before then winning two tournaments in her first three starts on the LET. Going on to gain LPGA membership after her ISPS Handa World Invitational victory in August.

Leona Maguire drew in a huge crowd in Ireland at the KPMG Women's Irish Open in September, a firm home favourite who was so close to joining the play-off at -14 after a superb weekend of golf.

In addition, recent LPGA wins from Charley Hull and Jodi Ewart-Shadoff will continue to increase the standards and expectations for European golf. Jostling for position in the world rankings amongst the usual top players from the East will cause a welcome shake-up on a global scale.

Just as the International Presidents Cup team stepped up to the plate, challenging the status quo when delivering 12 ½ points against perhaps the hottest American Presidents Cup team this century, the challenge to the female golf monopoly is well and truly underway.

'Golf, but Louder' is the mantra that blares out from the LIV Golf events, but a quiet message is being delivered to the old guard on the female tour.  The European women are very much here, and not just to take part.