Tour: Cool, calm and composed Charley back in the winner’s circle 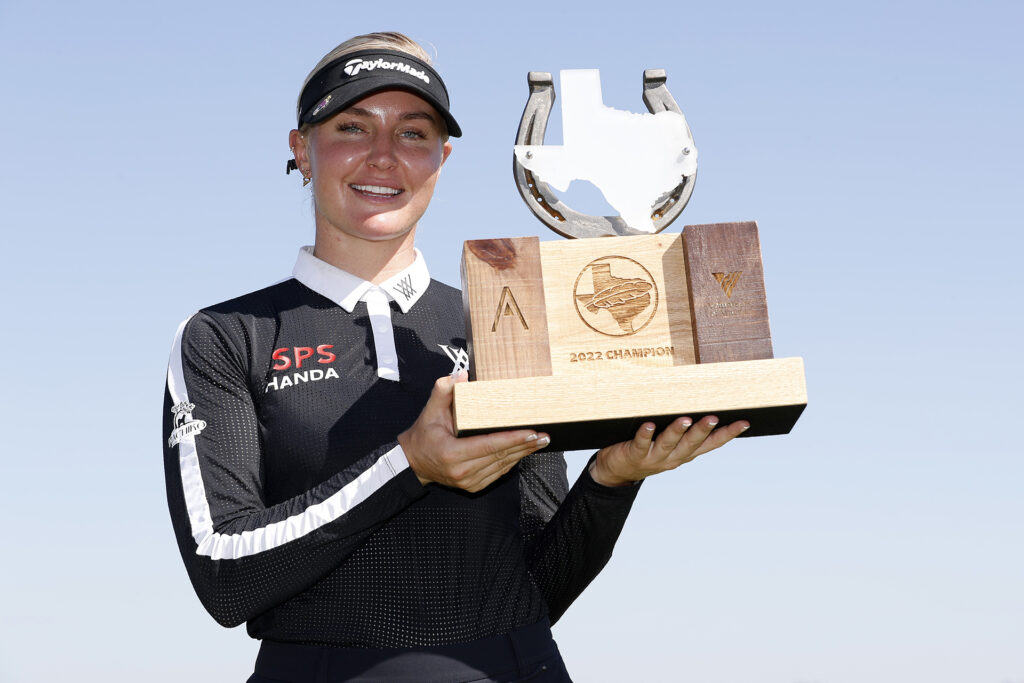 Charley Hull loves a challenge and the 2022 The Ascendant LPGA benefiting Volunteers of America was certainly full of them.

The 132-player field battled gusty winds on day one, contended with fast, firm fairways throughout the week and dealt with difficult hole locations on grainy greens. Perhaps that’s why the 26-year-old walked away on Sunday with a Texas-shaped trophy and a new pair of cowboy boots, having earned her second LPGA Tour victory in The Colony, Texas.

“I love a challenge, and this golf course is challenging. I play off the backs at home, off the back tees with the boys, and I always try and push myself to tricky golf courses at home so when I come on Tour, they're a bit shorter and a good length,” Hull said. “So this week I felt like it very much suited my game. I found it very scorable for myself.”

It certainly was scoreable for the English player, who led the field with 23 birdies and tied the 72-hole scoring record with a four-day total of 266 (-18). Hull’s putting was hot all week as she ranked third in the field in total putts with 103. While managing the course was quite a tall order, Hull also had to deal with the pressure of maintaining the lead, which she took during round two and never relinquished.

Going into the final round Hull was focused on how she wanted to play:

“Just going to play my normal golf. I usually play aggressive golf anyway, so not going to change it. Just do me and hopefully that works.”

She was being chased by 17-time LPGA Tour winner Lydia Ko and 18-hole leader and 54-hole co-leader Xiyu Lin. Lin especially put some late pressure on Hull in the final round, sinking a lengthy eagle putt on the par-5 17th to tie the lead, then barely missing an 18-foot birdie putt that would have sent the two to a play-off. Luckily, Hull enjoyed the fight and didn’t fold under pressure.

“When Xiyu made eagle on 17, I kind of enjoyed that. It made me want to birdie the last. Hit a good putt, I missed, but it was great fun,” Hull laughed. “I find stuff like that fun because it puts the pressure on me, and then I've got to commit and do it. You know what I mean? No, I really enjoyed that”

Hull’s first LPGA victory came at the 2016 CME Group Tour Championship, and she’s been chasing that second win for the last six seasons. This season, Hull has been playing well, earning four top-10 finishes and three additional top-20 finishes prior to this week’s win. Her 2022 results have reminded her of how she played in 2016, but it was an eerily similar good omen that led the 26-year-old to believe she would finally win again this season.

“I've had some good results this year. Had a very similar season to my 2016 season, so I'm actually happy I've got a couple events left as well, because I felt like in the 2016 season if I had a few more I could have pushed on,” Hull said. “Kind of knew it was coming because strange thing happened in 2016 when I won. My best mate, James, he won the Wellingborough Golf Club Championship, and this year he's won his second club championship and he was like, ‘This is your year, because you're going to win. You win every year I win.’ I went out and won so hopefully he wins the club champs next year.”

Hailing from the People’s Republic of China, Lin has also had an exceptional season but has yet to earn her first LPGA Tour title. The five-time CLPGA and two-time LET champion has now collected five top-10 finishes and eight additional top-20s this season. Having held the first-round lead and third-round co-lead, Lin was happy to be in contention once again, never believing she would fare so well on the tricky course.

“Actually, at the beginning of the week you're telling me I'm going to shoot 17-under here and finish second I will take this any time, because I always found this course is very challenging for myself,” Lin said. “My game is not at the top, but I think I manage it really well, and today especially last couple holes I try really hard and I make some really, really good putts. So overall, I'm proud of myself.”

In the penultimate grouping, Ko contended for the title, tying Hull’s lead with two birdies on the first two holes, then vying back-and-forth for it throughout the round. She ultimately posted at -16, just two shots back, after a bogey-free, six-under-par 65. The solo third is Ko’s best finish this season since her victory at the 2022 Gainbridge LPGA at Boca Rio.

Another win for Hull before the season is out?

With five events now left on the LPGA Tour calendar, Hull will now head to New York and the LET Aramco Team Series event next week, where she took the individual title last year. She will then return to the LPGA to play the final two events of the LPGA season in November. We’re sure that they’ll be plenty of fans expecting to see her at the top of the eladerboard again before the season is out. Watch this space.

This week it’s the LPGA MEDIHEAL Championship at The Saticoy Club in California.