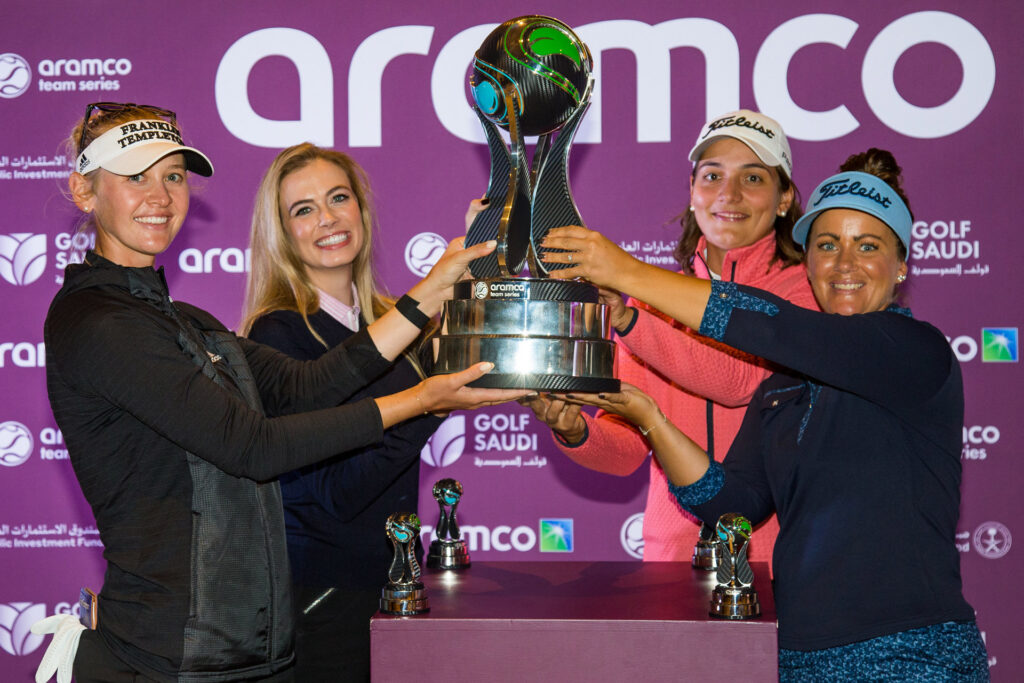 After starting the day two strokes behind the overnight leaders, Jessica Korda, Karolin Lampert, Lina Boqvist and amateur, Golf Channel presenter, Alexandra O’Laughlin produced another solid round to finish with a total of 41-under-par.

With the sun having set in New York, Captain Korda headed to the floodlit 17th to compete in the play-off against Sophia Popov and her par was enough to clinch her second LET title, while it was a first LET title for Lampert and Boqvist.

Commenting on the play-off, Korda said:

“I honestly was just praying for good speed on the green, I wasn’t sure how hard to hit it, it was playing so different to when we were out there during the round. It was really tough.

“It was nice to be able to share it with the team. This is such an individual sport and the fact you’re able to win as a team is so cool. It was a great experience and we had so much fun, being able to pick a player and then we have great additions. Today we really came together, and it was one of our best days. The front nine was tough but the last six holes were great.”

“It was a fantastic week playing with this team – the best memories in my career!”

“I didn’t have the nerves until the last couple of holes because it felt so real, we were in the team mindset because we kept encouraging each other with our putts and shots. Pretty much the coolest event I have played.”

For Team Popov, who were also two shots off the lead overnight, they had a solid front nine which saw them seven-under-par for the round.

With tricky conditions and some tough closing holes, the leaderboard tightened as they came down the stretch but a clutch birdie from Hayley Davis on 18 ensured the team competition went to a play-off as they also finished on 41-under-par.

And despite a good tee shot on the first play-off hole, Popov was unable to capitalise, and the Captains headed back to the tee box which ultimately saw Team J Korda triumph.

Team Hull had an exceptional final day producing a round of 20-under-par to put them at a total of 40-under-par and set the clubhouse lead which ultimately left them in third place.

Team Pace and Team Law ended in a tie for fourth place on 35-under-par while four teams were a shot further back on 34-under-par.

Off the back of the sensational team performance, it was Charley Hull who recorded the round of the day in the individual competition.

After starting her round with four consecutive birdies, the Solheim Cup star carded a flawless round of 65 (-7) to catapult her to 12-under-par and win the individual title – her third LET victory.

“I was playing well the first couple of days, but today I really got it going. It was tricky conditions out there, so that is probably one of the best rounds I have played ever. I was very proud of myself and to finish with a birdie I’m very happy.

“I think 16, 17 and 18 are all tough holes and on the 16th, I hit a wedge shot coming in there and it just skipped over. On 17 it was a three-club wind, I hit a rescue 200-yards into the back bunker. It was a tricky up-and-down, I haven’t been my best at them this year, but I have worked on them over the last few weeks. It was a good up-and-down and a good birdie on the last.”

After winning for the first time since the 2019 Fatima Bint Mubarak Ladies Open, Abu Dhabi, Hull wants to round off 2021 in style.

“Back in 2019 was my last win, it’s good to get a win and coming towards the end of the season I hope to finish on a high.”

World number one Nelly Korda, who led after the second round, finished in second place on 11-under after carding a round of 70 with compatriot Danielle Kang in third place on nine-under-par.

With her fourth-place finish, Babnik has moved up to fourth place with 1,321.89 while with her win Hull has jumped up to seventh place in the standings.