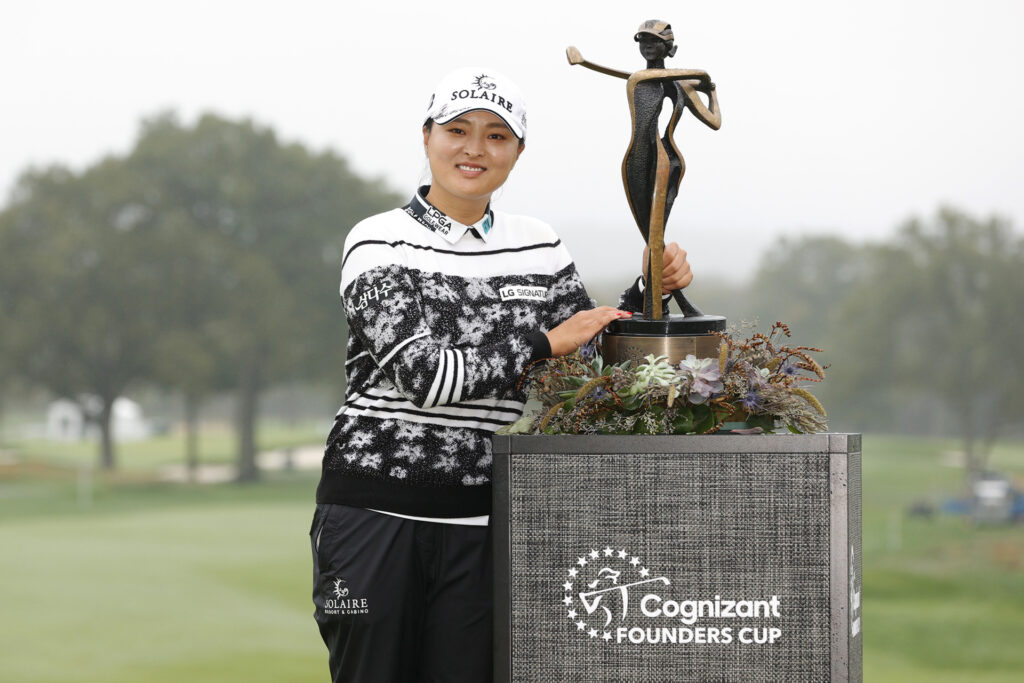 The win was her third of the season, matching world number one Nelly Korda as the only three-time winner this season. She also tied Annika Sorenstam (2005) and So Yeon Ryu (2016 into 2017) with 14 consecutive rounds in the 60s, and became the fifth player from the Republic of Korea to reach double-digit wins in LPGA Tour history, joining Se Ri Pak (25), Inbee Park (21), Sei Young Kim (12) and Jiyai Shin (11).

After her win Ko said:

“This win is my 10th career win, so this is really special. Two years ago I won this tournament, and I waited since the two years from the original to here. I got a lot of the pressure on the course. I knew I'm defending champion and I knew like 60s score beat Annika's (and So Yeon’s) record and wire to wire, so I had a lot of pressure on the course today.

“I didn't look at the scoreboard whole way, whole day, and I just check the scoreboard on the 18th green. My caddie told me, ‘Did you notice?’ No. Yeah, I made it, and I'm so happy right now.”

The 26-year-old now heads back to Korea to prepare for the next LPGA event, the BMW Ladies Championship from October 21-24. Will she make it 15 rounds in a row?

In her final event of the season, Prima Thammaraks (Bangkok, Thailand) walked away with her first trophy at the Symetra Tour Championship, her first since becoming a Symetra rookie in 2015. Entering the final 18 holes in second and one stroke behind 54-hole leader Daniela Iacobelli (Melbourne, Fla.), Thammaraks posted a seven-under-par 65 to finish at -22, smashing the 72-hole record for the event by three strokes last set by Riuxin Lin (Guangdong, China) in 2018. Upon her win, the 29-year-old was overwhelmed:

“I saw everyone and I just couldn’t hold it. It was just very emotional.”

The win wasn’t enough to earn a spot in the top 10, Thammaraks finished in 13th in the Race for the Card final standings, enough to seal a spot for LPGA Q-Series later this year. More importantly, it means she has the time to go home to Thailand and visit family for the first time since March.

“I was trying really hard to finish in the top five and more than anything was trying to play some good golf. But I didn’t realize I won until I looked at the leaderboard, and it’s more than a win. It’s a first win, with everybody here, and it means I can actually go home [to Thailand] after this week if I want. I can see my family and that means the whole world to me.”

Sweden’s Linn Grant rounded off an excellent week in France producing a final round of 72 to win the Terre Blanche Ladies Open by four shots. Her first professional win.

It was a slow start to the round for Grant who bogeyed her second hole and then made a double bogey on the fifth, but she bounced back with a birdie on the seventh.

The former Arizona State University player began her back nine in style with an eagle on the 10th and birdied 13, before dropping shots on 15 and 17.

However, a final birdie on 18 ensured she produced a level-par final round to finish on 10-under-par and win her first tournament as a professional.

In second place was Danish amateur Amalie Leth-Nissen, who shot a final round of three-under par, 69 to be four shots behind Grant.

“It was a beautiful course and venue with so many volunteers making the tournament a success. I had a good time with the professionals during the three rounds and it was nice to see that I can compete on LETAS – even though Linn was in a league of her own this week!”

Sungjae Im claimed a four-stroke victory and second PGA Tour title at the Shriners Children's Open. Starting the day three shots back, the Korean shot a nine-under par 62 on the final day at TPC Summerlin to finish 24-under par and four shots clear of American Matthew Wolff.

"I know I won my first win on my 50th start and to win my second PGA Tour win on my 100th start, that in itself is a pretty amazing stat. It was hard coming, but I think today how everything went, I think it was a gift from above."

The PGA Tour stays in Las Vegas and moves to The Summit Club and The CJ Cup.

Cabrera Bello took a two-shot lead into the final round of the Acciona Open de Espana in Madrid on Sunday but instantly lost his advantage with a double-bogey at the first. At the turn he was two shots behind fellow Spaniard Adri Arnaus, however he made three consecutive birdies from the 13th hole to force a play-off.

The 37-year-old went on to beat Arnaus on the first extra hole. The world number 231, who was without a top-10 finish since January said:

The world No 231, without a worldwide top-10 finish since January, bounced back from an opening-hole double bogey to card a final-round 69 at Club de Campo Villa de Madrid.

"I came here in a pretty bad place with scores being not what I expect them to be and to be able to get momentum and turn it around and to walk out of here with a win means a lot to me. Hopefully I can keep going and get back to the player I know I can be.”

He joins other Spanish golfing legends like Seve Ballesteros, Sergio Garcia and Miguel Ángel Jiménez as a winner of his national open. Cabrera Bello added:

"It was definitely one trophy that was on my bucket list. To join my name to all those champions - Alvaro (Quiros) as well that I can think of - it's very, very special.”