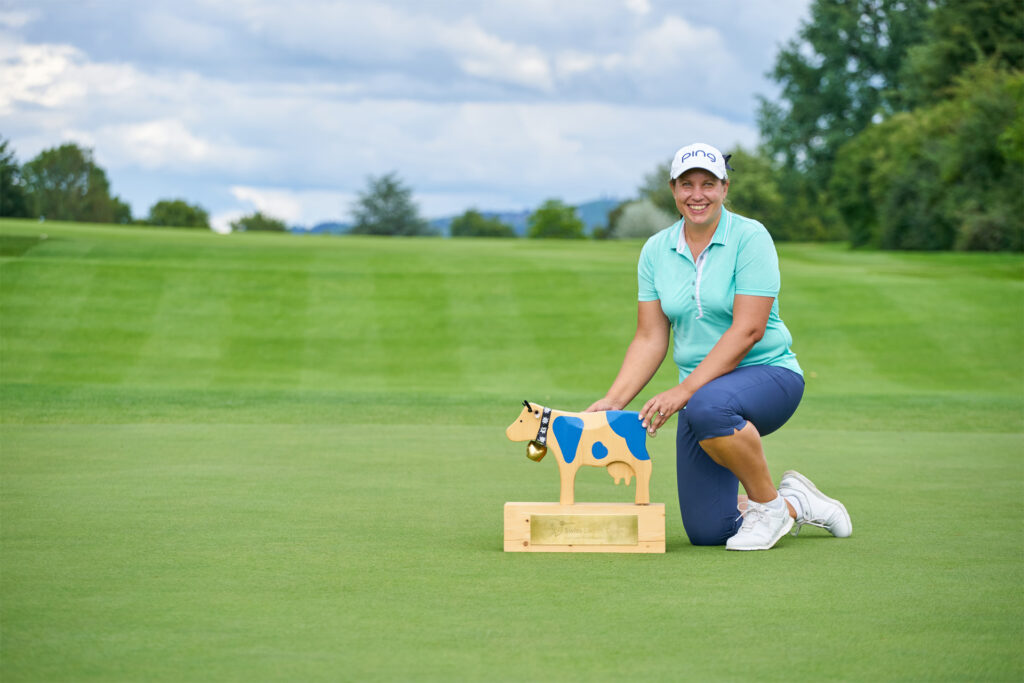 After 14 seasons on the Ladies European Tour, England's Liz Young wins her fist LET title. Plus wins for Ally Ewing and Shane Lowry.

England’s Liz Young fired a final round three-under-par 69 at the VP Bank Swiss Ladies Open to secure her first victory on the Ladies European Tour (LET).

The second round was completed early on Saturday morning with the Englishwoman holding a one-shot lead heading into the final round.

Despite a bogey on the first, Young bounced back with birdies on the third and seventh holes to put her firmly in contention before she got a stroke of luck on the 10th to save par.

Two further birdies on 11 and 14 gave the 39-year-old a two-shot lead with four holes to play and a par on the last was enough for her to seal victory.

“I can’t believe it right now! I’ve been out here a while and haven’t had the win yet, so to do it here in Switzerland is just fantastic,” she said.

In her 14th season on Tour, Young has had a solid 2022 with two top-10s and two further top-15 finishes, and she knew her game was trending in the right direction.

“I did feel it coming, I knew my game was good,” she continued. “In Sotogrande I didn’t play well, and I was burnt out, I took two weeks off which I needed and got my game back in shape. I knew my game was coming together and I was getting better and better – that’s why I’m still out here!

“I said I’d keep playing as long as I enjoy it and as long as I keep getting better – 14 years later we’re here. I hope my daughter is watching. I have been out here a while and never really been close to the win, but I’ve had some good results in strong field events. To finally get across the line is… yeah.”

“The last couple of holes, I was giving back to myself. I’m happy for Liz and I’m okay with not making a birdie on the last hole. I think that going out and shooting seven-under with no preparation, I went out with a very chilled feeling, and I think I tried too hard the second day and I tried too hard today.”

After her second-place finish, Grant now overtakes compatriot Maja Stark in the 2022 Race to Costa del Sol and sits at the top of the rankings. She added: “We’ll see if Maja manages to come back, or I’ll see her at the LET finale!”

England’s Rosie Davies ended the tournament on 10-under-par in third place – her best-ever result on the LET – after a final round of 70.

One shot further back, England’s Annabel Dimmock recorded her best result of the season in seventh alongside India’s Amandeep Drall and France’s Charlotte Liautier, while Austria’s Emma Spitz rounded out the top 10 on seven-under-par.

In the 2022 Race to Costa del Sol, Grant tops the standings having accumulated 3,353.91 points from the 15 events she had played.

Stark sits second with fellow Swede Johanna Gustavsson in third, but De Roey closed the gap in fourth place and now has 1,711.71 points.

Young has jumped from 35th up 12th in the rankings and has 1,062.16 points after her victory in Switzerland, with Davies also climbing from 55th up to 32nd place.

This week the LET returns to France at the Lacoste Ladies Open De France at Golf Barrière.

The 54-hole leader Ally Ewing began her final round of the Kroger Queen City Championship presented by P&G with eight straight pars on Kenwood Country Club’s Kendale Course, a slow Sunday start that allowed Xiyu Lin to take the lead with a birdie on the par-4 seventh.

But Ewing dug deep and found some magic in her last ten holes as she eyed a third LPGA Tour title. She made a critical par putt on seven to remain at -16 and one back, and then carded a birdie on the par-4 ninth to tie the lead. Ewing and Lin matched pars on 10 and 11 and did the same with birdies on holes 12 and 13, now tied at -19 with five to play.

Ewing rattled off three more birdies on 14, 15 and 16 – her second time this week carding five or more birdies in a row –  and took the lead at 22-under-par with two to play. Lin birdied the 16th and carded a late birdie on the 18th to sit at -21 and put some pressure on Ewing’s two-foot winning par putt. But Ewing easily drained the shortie to post a six-under-par 66, becoming the inaugural Queen City Championship winner and earning the third win of her professional career.

“I was dealing with some nerves,” said Ewing who began the day with a one-shot lead at -16. “I knew that I had a lot of golf ahead of me and great competition in people that were behind me starting the day, so knew I needed to play solid golf, and I was playing sold golf for eight holes. That birdie on 9 really set a tone for me. Allowed me to loosen up a little bit more, and finally saw that putt go in and several more fell in as I made the turn. Just really excited. Really happy and pleased with how I played. To get the win means a lot.”

The flat stick was Ewing’s most potent weapon this week in Cincinnati, with the 29-year-old needing less than 30 putts per round each day of tournament play en route to her career-best 72-hole score. Mentally, Ewing gave a lot of credit to her husband, Charlie, who surprised her on the final green after the victory, for helping her through the struggles of 2022. Today’s win is her first top-10 finish of the season and Ewing says the constant support she gets at home really helped her keep her chin up throughout what’s been a challenging year.

It was another close call for Lin, who fired a bogey-free, seven-under-par 65 to finish in solo second for the second time this year. While she’s been the bridesmaid in certain winning moments throughout 2022, Lin was still proud of the fight she put up right until the very end and has plenty of positives to carry forward as she looks ahead to the end of the year.

“I think I stuck with my game plan,” said Lin. “I was going very aggressive from the first hole, and I normally don't set a goal, but I really thought today with a 6-under round I will be pretty close. It turns out I shot 7-under and still lost by one. This is LPGA. The girls are really good out here. Ally played absolutely amazing, especially her back nine. It's incredible.”

Playing in the final group for the first time on the LPGA Tour, Mexico’s Maria Fassi managed to scrape together a one-under-par 71 en route to solo third, her new career-best individual finish. While Sunday was not the day she was looking for, Fassi is still projected to jump up 30 spots from 97th to 67th in the Race to the CME Globe, a healthy move that relieves some pressure as the end of 2022 approaches.

Korean major champion Jeongeun Lee6 finished in solo fourth at -14 with a trio of players tied for fifth at -13: Andrea Lee, Marina Alex, and A Lim Kim. Australian Sarah Kemp finished alone in eighth at -12 with Atthaya Thitikul one back in ninth at -11. Four players finished in a tie for 10th at -10, most notably Jessica Korda who fired a final-round six-under-par 66.

The LPGA now moves to Portland and the AmazingCre Portland Classic at Columbia Edgewater Country Club.

Shane Lowry won his sixth DP World Tour title and his first since the 2019 Open Championship when he shot a final round seven-under-par 65 to finish one shot clear of Jon Rahm and Rory McIlroy.

The BMW PGA Championship had been reduced to 54-holes after play was suspended for Friday due to the passing of Her Majesty The Queen on Thursday afternoon.

The Irishman managed a bogey-free week on his way to top the leaderboard on 17-under-par. His final round consisted of an eagle and five birdies.

There was an anxious wait for the 35-year-old, who had started the day two shots off the lead, as fellow Irishman McIlroy was also in the hunt after his FedEx Cup victory.

John Rahm had set the early clubhouse lead after a round of 62 and 16-under-par. Lowry started his back nine with a birdie to move within one of Rahm, before getting up and down from a greenside bunker on 12 to make birdie and draw level.

On the par-five 18th, Lowry made the green in two and two-putted from 20 feet for birdie and to take the clubhouse lead from Rahm.

This turned out to be enough for victory as McIlroy was inches away from a final hole eagle to force a play-off.

"I made no secret how I feel about the whole thing. I wanted to win for myself first and foremost, but for everyone that has stayed loyal to this Tour I really feel this is one for the good guys."

"It means a lot. It's been a good year, but felt like I've been close a few times and only a few tournaments left this season and I really wanted to win one and this was top of the list.

"I'm so happy. I can't put into words how happy I am, how much I love this tour, this tournament. I'm the happiest man in the world right now. One of my main goals is to go to Rome next year and help win back the Ryder Cup so I'm delighted that qualifying started this week and I have made some good points."

Talking of the Ryder Cup, this week is the Italian Open which is being played at Marco Simone where the 2023 Ryder Cup will be played.