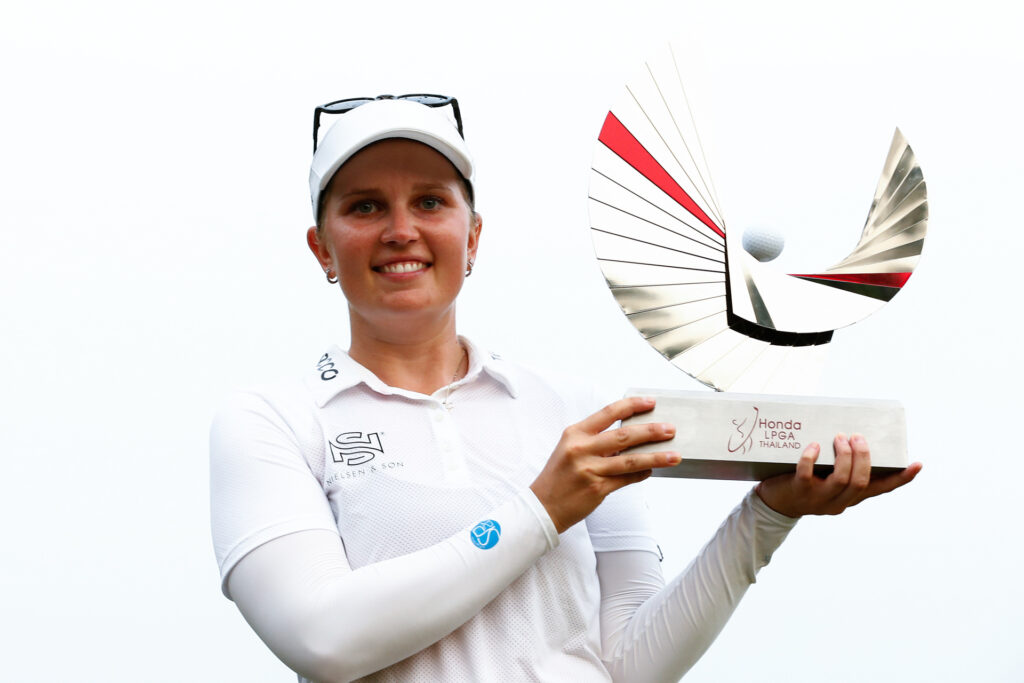 Nanna Koerstz Madsen, the European Solheim Cup star, added a first LPGA Tour victory to her ever-growing resume on Sunday as she won the 2022 Honda LPGA Thailand. Not only that, but she also became the first player from Denmark to win on the LPGA Tour.

The 27-year-old started the day with a one-stroke lead over China’s Xiyu Lin and fellow Solheim Cup teammate Celine Boutier. Koerstz Madsen held a four-stroke lead over Lin through 15 holes, however, she dropped a shot with a bogey at 16 and Lin cut the deficit to two with a birdie at 17.

On the 72nd hole, Koerstz Madsen sent her 8-iron approach into the grandstand behind the green. She was able to take free relief but could not get up and down for par, settling instead for a closing bogey. Lin’s 5-foot birdie putt found the centre of the hole and sent the two to a sudden-death play-off.

On the first play-off hole, Lin executed a master chip from off the front of the green, with the ball coming to a stop right on the lip of the hole. “I just cannot believe that chip didn't go in,” Lin said of the incredible shot. She tapped in for birdie, and Koerstz Madsen knocked in a 4-footer to match.

It came to the second play-off hole where the Dane made a ten-foot putt for eagle to Lin’s birdie to become a Rolex First-Time winner.

Although proud of how she finished, Lin couldn’t believe that her chip didn’t go in on the first play-off hole, she said:

“I just cannot believe that chip didn't go in. But, I mean, I'm pretty proud of myself. I haven't been into many play-offs, and either match play as well, so I was only nervous for a little bit and then I quickly calmed.”

“It's amazing. It's a dream come true. It was a crazy day; a lot of good things. It was actually fun playing the play-off with (Xiyu) at the end. She really fought. She finished up birdie-birdie, so she played amazing, too. Yes, I'm not going to lie, I was a little nervous there. I'm really excited to be standing with the trophy right now.”

Koerstz Madsen and Lin finished at -26 overall to set a new tournament scoring record, breaking the mark of -25 set by Jessica Korda in 2018.

Home favourite Atthaya Thitikul finished in a tie for eighth. The 2021 LET Race to Costa del Sol Champion has made a strong start to her LPGA Rookie season with a fourth and eleventh place finish in her last two events.

The LPGA now takes a week off before returning to American soil and the JTBC Classic presented by Barbasol in Carlsbad, California.

World number two Nelly Korda took to her social media channels on Sunday to announce that she is receiving medical treatment for a blood clot. She said:

"On Friday I was in Ponte Vedra Beach, FL for a photoshoot and a commercial appearance. After a typical morning workout, my arm started to feel like it was swelling. At the advice of my doctor, I went to the Emergency Room as a precaution. I was diagnosed with a blood clot. I am currently at home getting treatment to eliminate further risks. I will communicate my status as and when there is more information. In the meantime, I want to thank everyone for their support and ask for privacy for all our family during this time. I hope to be back soon. Thank you. 🙏"

How this will impact her over the coming weeks remains to be seen but we all wish Nelly a speedy recovery.

After three players finished on 22-under-par at the MyGolfLife Open in South Africa, it was Spain’s Pablo Larrazabal who claimed his sixth DP World Tour title.

Fellow Spaniard Adri Arnaus and England’s Jordan Smith headed into a three-way play-off. Arnaus bogeyed the first play-off hole, whilst the others birdied and then Larrazabal was able to birdie the second play-off hole to take the title.

Talking after his victory, the 38-year-old said:

"This wins means a lot. I've been working so hard and I'm very happy to get it done.”

This week the DP World Tour stays in South Africa for the Steyn City Championship.

Due to wet and stormy weather, The Players championship will have a Monday finish*. So, whilst we wait to see who will win an obscene $3.6 million (here's the prize fund breakdown) - let's celebrate Shane Lowry's magnificent hole-in-one on Sunday.

*Update - it was Cameron Smith who held his nerve to capture the biggest win and largest pay cheque of his career to date. He became the fifth Australian to win the PGA Tour's flagship event and took home $3.6m, the largest prize in golf.

Smith's shot into the iconic 17th green summed up what was a spectacular final round...

The 28-year-old finished on -13, one shot ahead of India's Anirban Lahiri and two clear of England's Paul Casey.

This week the PGA Tour is at Innisbrook Resort in Florida for the Valspar Championship.