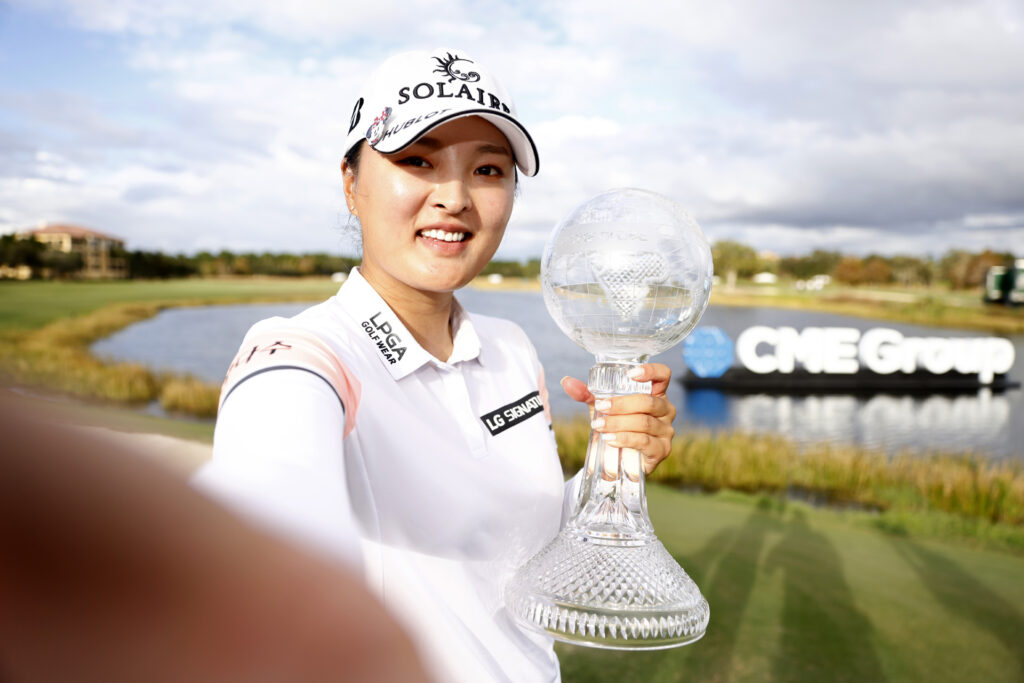 It's the final event of the 2022 LPGA season where 60 players will play for a $2 million winner's prize.

After 31 official events, the LPGA Tour returns to Tiburon Golf Club in Naples, Florida for its season finale, the CME Group Tour Championship, a culmination of the season-long Race to the CME Globe.

The Race to the CME Globe is a season-long points competition in which LPGA Members accumulate points in every Official LPGA Tournament to enter the season-ending CME Group Tour Championship.

Every player will compete in the 72-hole, no-cut competition, with an equal chance at winning the $2 million winner’s prize, the largest in the history of women’s golf.

Highlighting the field this week are the top-10 players in the Rolex Women’s World Golf Rankings, including the newly renamed World No. 1, Nelly Korda, who moved into the top spot for the third time in her career following her win at the Pelican Women’s Championship.

Two-time defending champion Jin Young Ko makes her return to the United States this week for the first time since the KPMG Women’s PGA Championship in June. Ko won the 2020 edition of the Tour Championship by an impressive five-shot margin and took home the title in 2021 after setting the 72-hole tournament scoring record with a four-day total of 265 (-23).

Ko, who has slipped to fourth in the World Rankings, has been battling a wrist injury throughout 2022, but she’s still hoping to find some of the magic she’s had in previous years.

“I like to play this golf course. It's not easy, but I have great memories,” said Ko who is a combined -51 in her five previous appearances in the event. “So hopefully this week will be the same as the last two years. In 2020, I played just four events, but I won this tournament, and last year I had a great season. I was thinking last year, I focused really well on the course. A lot of good players were behind me, and they tried to follow me, but I was nervous because Nelly was there and Nasa and many good players. I did my best. I had a win, and hopefully this week (I will) too.”

Ko has only played two LPGA Tour events since the CP Women’s Open in August. Last week’s Pelican Women’s Championship presented by Konica Minolta and Raymond James marked her first start in the United States since the KPMG Women’s PGA Championship in June, and she played the BMW Ladies Championship in the Republic of Korea last month, missing the cut in both events.

Despite her lackluster form as of late, Ko says she’s feeling comfortable with her swing at the moment and isn’t too worried about practicing a ton before play begins on Thursday. The lack of prep work was something she adopted at last year’s CME, and considering she ended up with a trophy in hand at the end of the week, it’s not a bad strategy to put into place as she looks to add a third Tour Championship title to her already stacked resume.

“I didn't practice the last two days at the range. Same as last year,” Ko said. “But I played golf on the course last two days. I know my swing right now, so I don't want to practice hard with this hot weather. I want to just protect my wrist during the tournament.”

There are ten players making their debut in the CME Group Tour Championship, including 2022 LPGA Tour winners Ayaka Furue, Maja Stark, Atthaya Thitikul, and Gemma Dryburgh. In addition to Ko, there are five other past champions in the field, most notably 18-time winner and Rolex Rankings No. 3 Lydia Ko.

Aon plc, a leading global professional services firm, and the LPGA Tour have announced that Minjee Lee has won the 2022 Aon Risk Reward Challenge and the $1 million prize, thanks to her performance using information and advice to make better decisions on the most strategically challenging holes throughout the season-long competition on the LPGA Tour.

"We are excited to congratulate Minjee on joining Scottie Scheffler as this year’s Aon Risk Reward Challenge Champion. Her approach to the game and ability to execute in the moments that matter most is so impressive,” said Jennifer Bell, Chief Executive Officer, North America at Aon. “This season really came down to the wire, but we are thrilled to award Minjee with the Aon trophy and $1 million prize.”

Lee has been one of the stars of the LPGA Tour season, winning twice, including the U.S. Women’s Open presented by ProMedica, and currently sits in third place in the Race to the CME Globe.

Lee’s strong performance off the tee gave her the clarity and confidence she needed to make better decisions on the Aon Risk Reward Challenge holes, allowing her to go for the green 58% of the time versus the LPGA Tour average of 32%.

Her approach shots on Challenge holes averaged 16 feet closer than the Tour average and she finished the Challenge second in strokes gained overall, which helped her to clinch this year’s title.