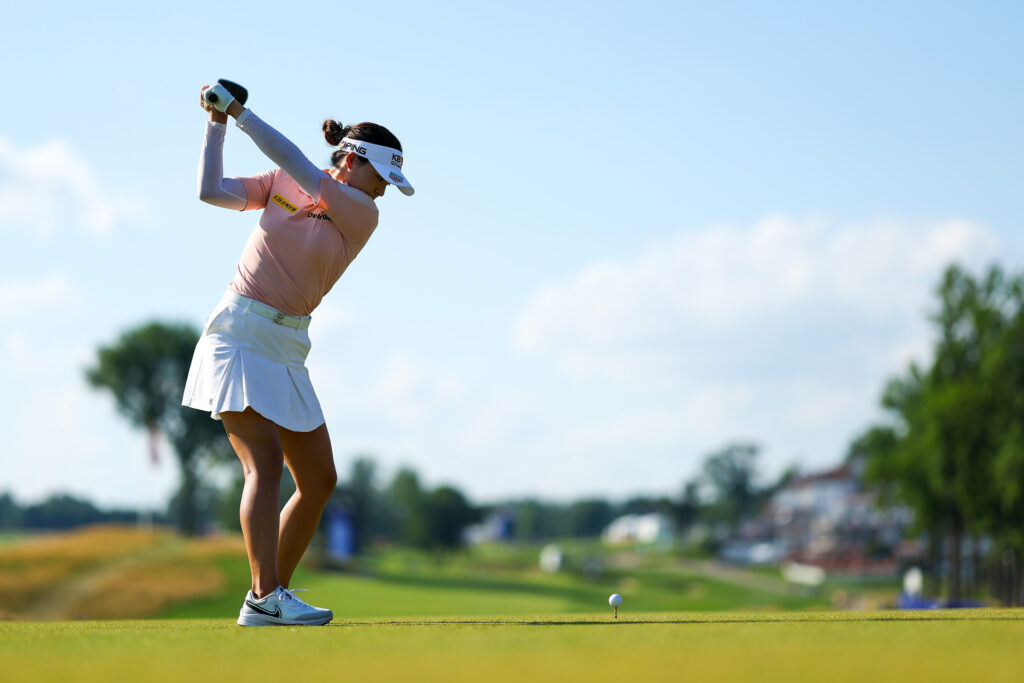 Friday at the KPMG Women’s PGA Championship, with competitors enjoying more amiable playing conditions than they had on opening day, the chasers started jostling to take their place in line for the weekend ahead at Congressional Country Club.

With less wind and no rain, they played better, and shot lower – 24 players shooting in the 60s, compared to three on Thursday – but they still could not slice into In Gee Chun’s massive lead. In fact, Chun, a two-time major champion from South Korea, followed her magical, opening 64 – five shots clear of the next best score – and actually stretched her lead to six at the tourney's midway point.

With a birdie at the arduous closing hole as the tall shadows started to stretch across the long fairways of Congressional early Friday evening, Chun finished off a three-under-par 69 to take a commanding advantage. The leaderboard beneath her at the KPMG is stacked with major winners. Chun moved to 11-under-par 133, six shots clear of two other major champions, Lydia Ko (67) and Jennifer Kupcho (68), the latter of whom joined the Major Club earlier this season at the Chevron Championship.

If the 7-wood served as a magic wand for Chun on Thursday, setting up four close birdie looks, the 9-wood became Friday's star. (Who knows which club will get its turn on the weekend?) Chun took a scouting trip to Congressional last month, knew the course would play long and difficult, and put the 7-wood and 9-wood into the bag this week, replacing a pair of hybrids. At one point, Chun hit approaches on three consecutive holes on the opening nine with the 9-wood, setting up birdies at the par-3 second and the difficult par-4 fourth. At the shortish fifth, she hit an approach with a 9-iron (apologies to her 9-wood), and made yet another birdie.

Her final dagger came at the bending, 437-yard 18th hole, where there had been only four birdies all day. Chun hit a beautiful drive, turning the ball off a KPMG sign off in the distance, and then feathered a beautifully-struck 7-iron down the hill from 165 yards that settled 9 feet away. Making the putt was of the utmost importance to her, and you know the result. She buried it for 3.

Friday’s cut fell at three-over-par 147, with 72 players making it to the weekend. Twenty-six players are under par through 36 holes, after only 14 players were under par on Thursday.

Janet Lin of China was one of the competitors turning in a nice round on Friday, going bogey-free in shooting 68. Still, she heads to the weekend eight shots behind Chun. She said she kept her head down and played as if Chun’s name wasn’t even on the board. It’s not as if players can suddenly get extra aggressive on a course as exacting as Congressional. That mindset will lead to some quick bogeys.

“Her score is phenomenal,” Lin said of Chun, “but I don't know how to copy that.”

A big smile and laughter followed her words. Really, through two days, it’s about all anyone chasing Chun could do.

Chun turns 28 later this summer and is a special person as well as a player. When she won the U.S. Women’s Open in 2015 and added another major at Evian a year later, she spoke no English. She returned to school, improved her speech, and today she handles her LPGA questions in the U.S. in English, rarely bouncing something off a nearby translator. Chun also established a foundation at Lancaster (Pennsylvania) Country Club, which has become a second home, handing out scholarships to employees and young caddies each year.

Her golf at Congressional, through two days, has been flawless.

“I keep trying to make good focus, and I just want to keep trying what I did (the) last two days,” Chun said afterward. She did make a pair of consecutive bogeys Friday, at Nos. 7 and 8, just to prove she was mortal, but bounced back by shooting two-under-par on the second nine. “I think that's the key to make win this week. Just go with the flow, do what I can do.”

Through 36 holes, no player has done it remotely close to how good Chun has. She is in prime position to run down her third major title on the weekend outside Washington. The way her game is clicking, she could be tough to catch. But it’s golf, and golf is seldom, if ever, perfect.

A six-shot lead can be a mixed blessing. Any player would sign up for it, sure, but there also can be pressure in not wanting to be a player who surrenders it. Chun keeps sailing along, free and clear-thinking, looking to shoulder as little pressure as possible.

“I don't want to get more stressed, or I don't want to try to make a perfect game on the course,” she said. “I just want to enjoy my golf game. That's the key. ... I think I have a lot of chance to make win this week, yeah.”