Korda on top of the world after KPMG Women's PGA win 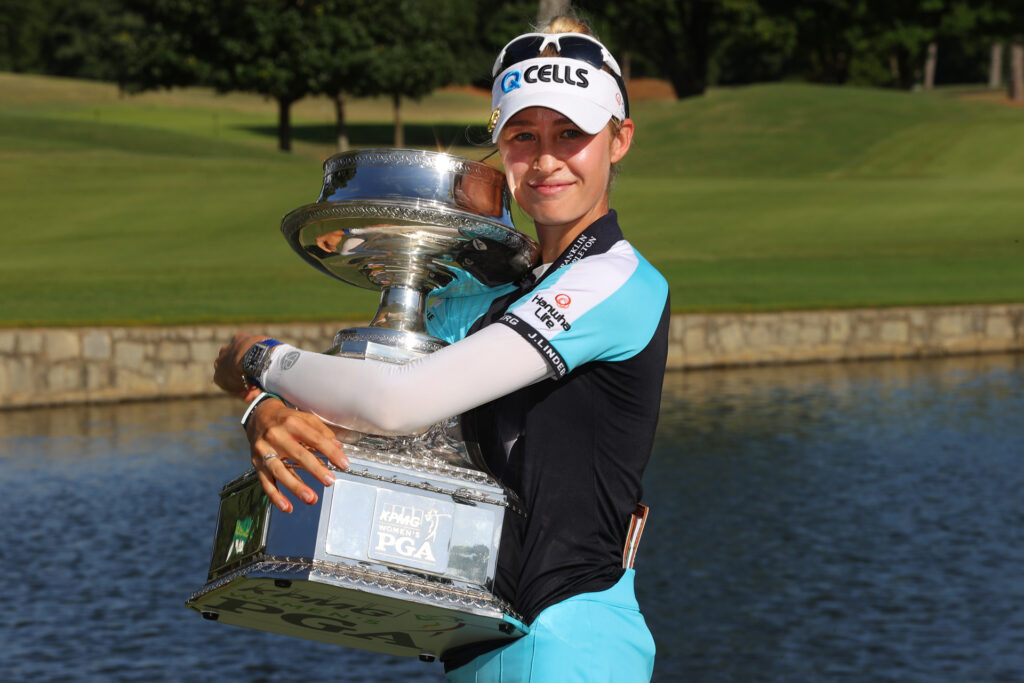 We predicted on Sunday that it would be a battle between Nelly Korda and Lizette Salas in the final round of the KPMG Women’ PGA Championship and it really did not disappoint. There was a different feel to the shoot out that we witnessed at the ANA Inspiration between eventual winner Patty Tavatanakit and Lydia Ko. The main reason being that they played in the final group together. On the front nine there was not really much to separate them, the biggest talking point coming from Korda’s exceptional seven wood approach shot on the sixth hole which came close to being an albatross!

The 12th hole proved a pivotal moment where Korda eagled and Salas bogeyed, which saw Korda take a four shot lead. Another birdie on 14 followed for Korda, but it was not going to be a simple finish to win her first major. She found water on the par three 15th and finished with a double bogey, talking afterwards about that hole, she said:

“But even my second shot, honestly I was aiming left, and I don't know, I have like, I guess I had a little bit of a mental block and I pushed it right at the pin. I was not going for the pin there. But that happens; it's golf. You're going to make mistakes, and you're going to have to be okay with hitting bad shots and hitting bad putts.”

Keeping her composure where others may have folded, Korda steadied herself to complete the final three holes in even par and win by three shots over Salas.

Winning the KPMG Women’s PGA Championship was her first major win and comes the week after winning the Meijer LPGA Classic. This was her third win of the season and her sixth LPGA Tour title. Korda is the first American to win a major since Angela Stanford won the 2018 Amundi Evian Championship. The 22-year-old will also become world number one when the rankings are published on Monday.

“Wow, just wow. A dream come true. A major championship and No. 1 in the world; is this week even real? It's amazing.”

This week the LPGA moves to Texas and the Volunteers of America Classic.

Whilst watching the final round unfurl at Atlanta Athletic Club, we believe there were probably a number of people, like us, madly refreshing the leaderboard over the final few holes to see whether Megahn MacLaren could secure her first Symetra Tour title. For what seemed like hours, the page finally refreshed after the 18th to show that not only had the 27-year-old won, she had birdied the last to win by two shots.

MacLaren came into the 2021 season with a career-best Symetra Tour finish of 22nd, which she earned twice in 2018. Last month, she came close to a win with a third place finish at the IOA Golf Classic but it was a two-stroke victory at the Prasco Charity Championship that she can now add the title of “Road to the LPGA” winner to her resume.

Commenting on her win, she said:

“I am just really really happy to be honest. It sounds quite simple but we are all out here to win and get our cards. I have had some kind of low moments over the last couple of years, so to get over the line is incredible.

“My family first and foremost. My parents and my sister keep me smiling all the time. There are a few more people close to me and they know who they are. This year especially my sponsors, Computercenter, Rohnisch clothing, Ambera, No Laying Up, the list (goes on). We are the ones with the trophy at the end of the day but there are so many people who go into that.”

MacLaren credited spending some time back home in England in helping her to victory:

“I got to have a few days at home after playing a couple events over in Europe. That was massive. I got to see my coaches which definitely helped but being able to reset and get away from it all, because it is a grind out here and you can beat yourself up quite quickly, just to see the people that I love and refresh mentally and physically definitely put me in a good space coming out here.”

Thailand’s Atthaya Thitikul shot a stunning final round of 65 to win the Tipsport Czech Ladies Open by one stroke and secure her third LET title.

It was the 18-year-old’s first win on the LET as a professional after she previously won the 2017 and 2019 Ladies European Thailand Championship while still an amateur.

Thitikul, who began the day on eight-under-par, got off to a difficult start dropping two shots in the opening four holes but bounced back with three consecutive birdies.

The teenage sensation rolled in another birdie on the ninth to make the turn in 34 and followed that up with two more birdies on 10 and 11.

The Thai star was not finished there as she made another three birdies in her final four holes to set the clubhouse lead of 15-under-par, which was enough to seal victory.

“I am so grateful for my first win outside of my country. I came close to a win on many previous tournaments, and I finally did it, it means so much to me! I am so proud to be able to represent my country. I understand my game which helped me a lot today. Nuria played some great golf this week and I know her time will come again in the future.”

This week is the Big Egg Open in Holland which will be played on Wednesday to Saturday.

England’s Lily May Humphreys sealed her first professional win in her debut on the LET Access Series, after securing a six-shot victory at the Golf Flanders LETAS Trophy.

The 19-year-old, who turned professional at the start of June, opened the competition with a round of 70 before carding a 67 in the second round, which moved her up to second place overnight.

On the final day at Rinkven International Golf Club, the English rising star shot a round of 66 to finish the tournament at -10.

“It feels amazing to have my first win as a professional and hopefully, it’s the first of many! It has been nice to play really well and get the win. It has boosted my confidence ahead of the next couple of weeks on the LET.”

“I holed pretty much everything today – apart from a three-putt from six feet on seven – but I holed everything else which was nice and takes the edge off the long game. Yesterday I putted well and holed a few, but I had a couple that lipped out whereas today all of them went in instead of half of them. It was the putter that won it for me this week.”

Hovland shot a 2-under 70 in the final round to complete a two-shot victory at the BMW International Open. He fended off local hero Martin Kaymer, who fired a eight-under 64 to finish second at -17. Jorge Campillo finished third at -15.

The 23-year-old moves into the top ten of the Race to Dubai Rankings in Partnership with Rolex and strengthens his position as he looks to become the first Norwegian to play in the Ryder Cup.

"I grew up watching mostly the European Tour," he said. "There’s a lot of guys who played this week who I grew up watching. It’s cool to be a champion of this Tour, in Germany, in a place that... it’s not in Norway, but it’s close and has some of the same feelings of being home. It’s a huge honour and finally Norway has a win on the European Tour."

"It's The Open, Olympics, Ryder Cup, there's so much golf to look forward to and I'm just going to have a blast."

This week the European Tour returns to Ireland and the Dubai Duty Free Irish Open.

Harris English birdied the eighth play-off hole to clinch his second PGA Tour title of the year following a marathon battle with Kramer Hickok at the Travelers Championship in Connecticut.

They both had birdied the 18th hole to finish tied at -13. In fading light, they battled it out over eight play-off holes until English was able to break the deadlock, sinking a 15 foot putt for birdie.

This is the 31-year-old American's fourth PGA Tour title. Afterwards he credited the fans and his opponent for keeping the play-off going for so many holes, he said:

"This was awesome. The fans were keeping us in it. Hats off to Kramer. What a competitor.

"We were grinding out there, making those six and seven-footers. That was incredible. What an experience. The fans are always awesome here. I'm glad we gave them a good little show."

The PGA Tour moves to Detroit and the Rocket Mortgage Classic.