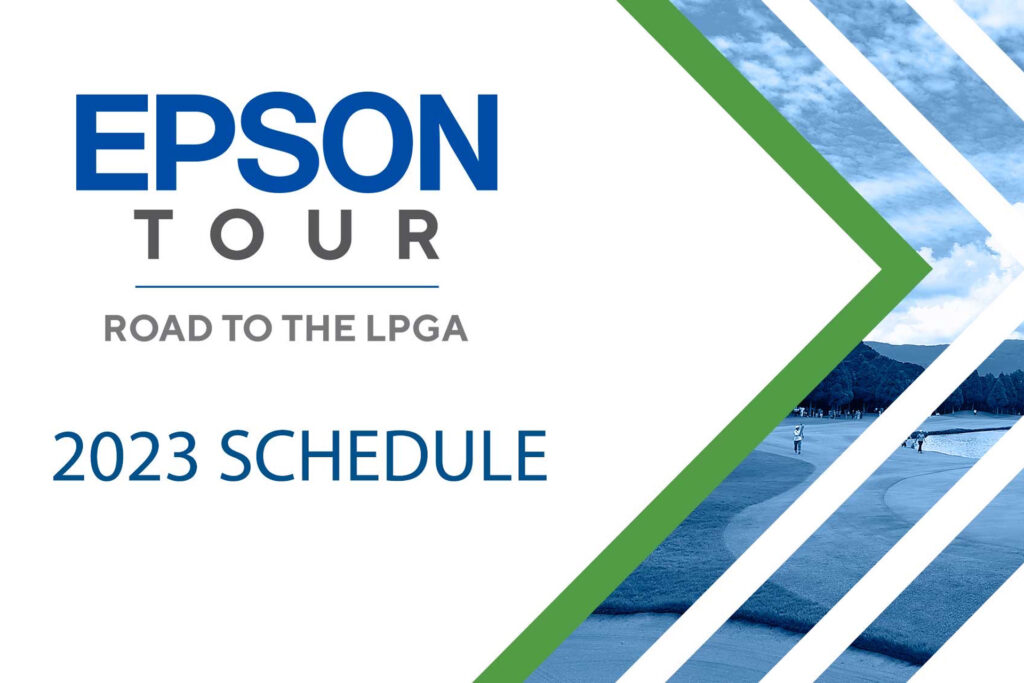 The Epson Tour, the official qualifying tour of the LPGA, will play for the most money in its 43-year history and boast its largest tournament purse for the 2023 season.

The season will tee off February 27 - March 5 with the Florida’s Natural Charity Classic in Winter Haven, Florida, at the Country Club of Winter Haven.

“We are delighted to unveil the 2023 Epson Tour schedule,” said LPGA Commissioner Mollie Marcoux Samaan. “This terrific line-up of tournaments is a big step forward in realizing the Epson Tour’s goal of providing the best opportunities for women pursuing their dreams on the golf course. With help from the Seiko Epson Corporation, our tournament partners and sponsors and the outstanding communities where we play, we’re proud to help provide these world-class athletes with the tools, opportunities and experiences they need to succeed at the highest level.”

“Our partnership with the LPGA presents a unique opportunity for Epson to empower future women leaders around the world,” said Epson global president, Yasunori Ogawa.

“Heading into the second year of the partnership, Epson is proud to support the dedicated and exceptional golfers chasing their dreams of playing on the LPGA who will compete on the Epson Tour in 2023.”

The Carlisle Arizona Women’s Golf Classic and the French Lick Charity Classic will share the honour of having the largest purse in Epson Tour history at $335,000. Three other tournaments will also increase their purse sizes for the 2023 season:

“We are excited to bring the Epson Tour back to Arizona for the third annual Carlisle Arizona Women’s Golf Classic,” said Carlisle Companies Chair, President and CEO, Chris Koch. “The women on the tour truly embody Carlisle’s culture of continuous improvement and resilience. With our record purse, we hope to attract the best golfers and show the Phoenix community and our employees true characteristics of excellence.”

The Epson Tour will also grow its Northeast swing with the Hartford HealthCare Women’s Championship. The inaugural tournament will be held at Great River Golf Club in Milford, Connecticut, with Hartford HealthCare as the title partner. The Connecticut Orthopaedic Institute will be onsite during the tournament, providing free health information, news about specialized services, and opportunities to elevate guests’ health — and their game.

“We are proud to welcome the Epson Tour back to Connecticut - the official qualifying tour of the LPGA,” said Karen Goyette, Hartford HealthCare’s Chief Strategy and Transformation Officer. “As a health care leader, and someone who loves the game of golf, I believe in the shared vision of these two organizations that help support young women on their path to excellence. This partnership clearly aligns with our vision and our commitment to investing in our great state of Connecticut.”

Utah will also see another tournament in 2023, with the addition of the Black Desert Resort Championship. Players will be competing for the second largest purse of the season, $300,000, in Salt Lake City, with course information to be announced at a later date.

The Epson Tour will also return to North Carolina in 2023. The new tournament, with details being announced at a later date, celebrates the tour’s diversity and DE&I initiatives. Since becoming the Official Qualifying Tour of the LPGA, the Epson Tour has grown to represent 45 nationalities.

The IOA Golf Classic presented by LPT Realty and the FireKeepers Casino Hotel Championship headline the list of deep-rooted tournaments, as they celebrate a milestone of 10 years on the Epson Tour schedule in 2023.

“We are so thrilled to be celebrating our 10th year of the IOA Classic,” said IOA Golf Classic Tournament Director John Ritenour. “This has been one of the best events that we do to entertain our customers and our insurance company partners. Playing with these young ladies is the most fun that any of our guests have playing golf. Every year our invited guests ask if they can play in it the following year.”

The 2023 season will conclude in Daytona Beach, Florida, with the Epson Tour Championship from October 2 - 8 at LPGA International. The top 10 on the Race for the Card money list at the tournament’s completion will receive LPGA Tour membership for 2024 and the chance to serve as an Epson Tour Ambassador, a program initiated by Epson upon the launch of their sponsorship in January 2022. The 10 individuals each will be offered $10,000 to jumpstart their LPGA career and in turn, wear the Epson Tour logo on their sleeve.

“I’m honestly very grateful to have played my first full professional season on the Epson Tour,” said 2022 Epson Tour graduate Grace Kim. “I have experienced and learned lots of lessons through this tour, and I believe it has really provided me a great insight for tour life on the LPGA. In addition to finishing in the top 10, being given sponsorship from Epson is such a bonus. I can safely say on behalf of the players who finished in the top 10 that we have been blessed to have a company support us on our journey beyond the Epson Tour, and we can’t wait to make them proud next year.”

The Epson Tour prides itself on sending women to compete among the best on the LPGA Tour, and many who got their start on the official qualifying tour have found early success in their careers. In all, 437 LPGA Tour titles have been won by former Epson Tour players, including 10 major championships since 2013. Current alumnae on the LPGA Tour include Nelly Korda, Brooke Henderson, Lilia Vu, Sophia Schubert, Hannah Green, Madelene Sagstrom and Ally Ewing.