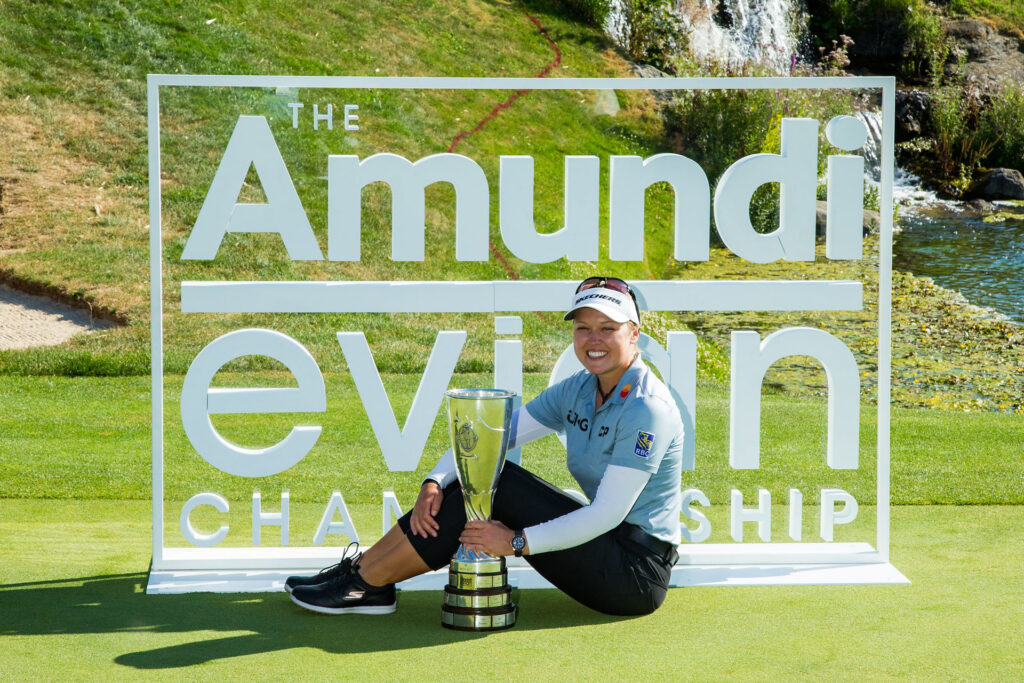 Heading into the final round at the Amundi Evian Championship, it had all the signs that it was going to be a closely fought Major. It certainly didn’t disappoint and kept us guessing until the final putt fell.

Brooke Henderson survived a rollercoaster final round and birdied the last hole to win the Amundi Evian Championship by one shot at 17-under-par at Evian Resort Golf Club in France.

The 24-year-old from Smiths Falls, Ontario, entered the final round with a two-shot lead but struggled out of the gates, dropping a shot at her first hole and then making a four-putt double bogey on the sixth, to lose her outright lead.

However, after sinking a birdie putt on the seventh hole and then making the turn in two-over-par, Henderson fought hard on the back nine to grind out the win and earn the first prize cheque, worth $1 million.

A strong back nine from Henderson

“After I sunk that putt, I looked at my sister, Brittany, and said: did we really do this?,” commented Henderson, who won her first major at the 2016 KPMG Women’s PGA Championship and is now in her eighth season on the LPGA Tour.

“It was definitely an interesting day and not the start I wanted, but I stayed patient. I knew going into the back nine, the saying is that majors are won on the back nine on Sunday, so I tried to stay in it and make a few birdies. The birdie on 18 was really nice.

“I didn’t play my best today but I kept trying to remind myself that I was still in it. I hit some good shots down the stretch. I’m super excited to have my second major championship and my 12th win on Tour. We’ll wait and see what the rest of the season holds.

“I’ve worked a lot with my coach and just spending time with my mum back home got me into the right headspace and gave me some perspective. To have two victories this year is exciting. It’s just having the right mindset and I’ll try to keep that moving forward.”

Rookie Schubert took to the major stage with ease

One of the most impressive performances of the day came from American Sophia Schubert who finished in solo second on 16-under-par after a 68 which included a spectacular back nine, featuring birdies on the 11th, 12th and 15th holes. The 26-year-old who is an LPGA Rookie from Oak Ridge, Tennessee and playing in her second Major championship said:

“I have a great caddie, Brittany. She really helped me stay calm today. I think mostly coming into this week I was just trusting God's plan for the week and for the rest of the season. I looked at the leader board and saw that I was two behind and after that I made an effort not to look, because I just wanted to focus on my game.”

Is anyone else feeling that they need to get themselves a caddie called Brittany?!

“I just feel happy at the minute and I like the Europe swing. Today I got my driver going a lot better. I spoke to my coach right before I teed off and he gave me a few little things. It feels good to be back in contention in a major.”

Hall had two eagles on her card, at the par-5 ninth and par-5 18th holes and she said:

“On nine,  I had a perfect yardage. The pin was really tucked on the right-hand side. I had to hit a little 3-wood all week, and I was really happy to have a little further in. I kind of cut a 3-wood over the bunker and ended up about 20 feet away and went straight in the middle for eagle.

“On 18, I was in between clubs and I had a hanging lie and hit a little 7-iron in to about 15 feet, and, again, it went straight in the middle. My putting was probably the best it's been all year today. I’m very happy with my progress.”

“It was a good day. I made very few mistakes. Just to finish it off with three birdies in the last four was very nice. I told Pontus on the last couple of holes, three more and we're done. Three more birdies and we can go.

“I love the course; it's beautiful. I also like that you can score really well, but it's also difficult if you're having a bad day, so I think it's a good golf course, and just to be in Evian is really nice. The weather is beautiful and we just had a great week.

“I'm just very happy with today. I feel like the last two days before that I've not struggled, but felt like I had more to give, and I think I got that out of me today, which I'm very happy about.”

In the 2022 Race to Costa del Sol, second-placed Grant edged closer to the leader Maja Stark, who missed the cut in Evian, although Stark followed her friend throughout the final round, walking the fairways from outside the ropes and the pair greeted each other with a chest-bump and a hug afterwards.

With 2,397.5 and 2,201.49 points respectively, Stark leads Grant by 196 points heading into next week’s Trust Golf Women’s Scottish Open, while Georgia Hall has moved up one place into the top 10. A victory at Dundonald Links is worth 625 points, while any LET member who wins the following week’s AIG Women’s Open at Muirfield will earn 675 points, setting up an intriguing fortnight in Scotland.