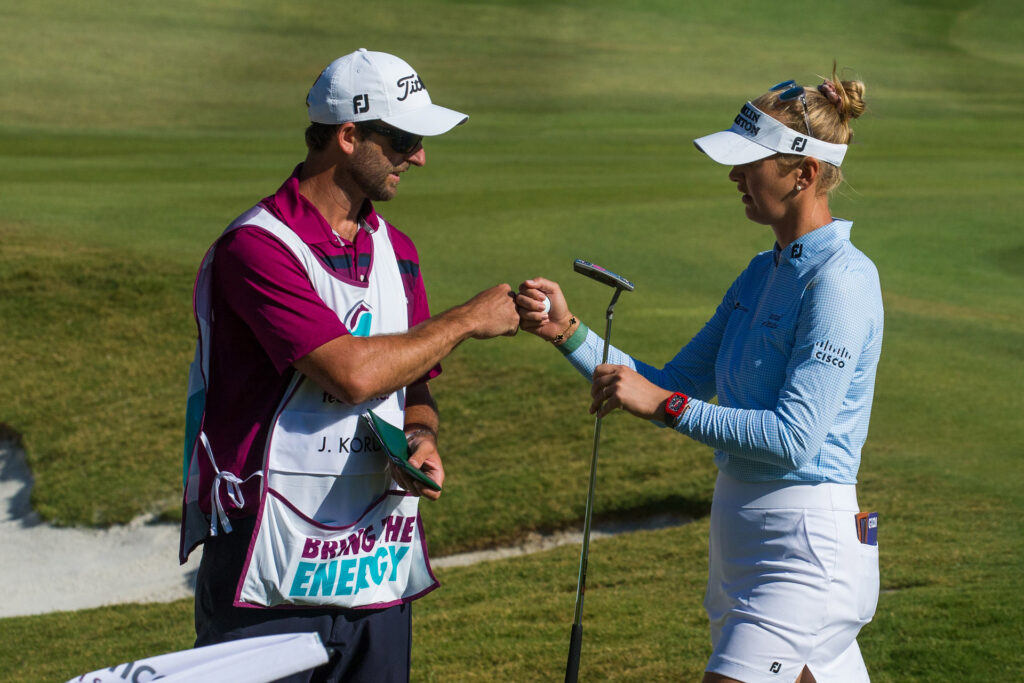 Jessica Korda produced a blistering round of 61 (-11) on the first day of the Aramco Team Series – Sotogrande to lead the Individual tournament by five shots.

The six-time LPGA Tour winner made three eagles on her way to shooting a course record and equalling the lowest round in relation to par on the Ladies European Tour (LET).

“It was an awesome round,” said the three-time Solheim Cup player. “We had a great vibe in the group and so obviously, I was really relaxed.

“It is probably the first round I have played in about three weeks that wasn’t 20mph wind, so that was really nice to be able to settle into the golf course. I have never made three eagles in a round, so I’m definitely going to remember this one!”

Korda had one blemish on the card with a bogey on the eighth, but was excellent otherwise with six birdies and three eagles.

And despite feeling slightly under the weather, the American was pleased to have been able to convert her birdie opportunities at La Reserva Club de Sotogrande.

“I still made a bogey and hit it into the hazard, so I wouldn’t say every aspect was working,” the world number 14 continued. “I was keeping it in play and giving myself opportunities and converting a lot of those.

“For the last month and change, I think I haven’t really been converting any putts and the floodgates opened today and hopefully they can continue tomorrow and that’s the beauty of golf.”

Team Jessica Korda also sits at the top of the leaderboard on 19-under-par in the Team competition after a great opening day.

The quartet of Korda, Czech’s Tereza Melecka, Finland’s Noora Komulainen and amateur Malcolm Borwick only dropped one shot in their round scoring 10-under-par on the front nine and nine-under-par on the back nine.

Captain Korda added: “We had a good vibe in the team, we kept it really loose out there. I know the girls were a little bit nervous at the beginning, but I told them there was nothing to be nervous about and to go out there and have fun and play some golf. We’re in Spain and there is beautiful weather, we’re lucky to be here.”

Team Roussin and Team De Roey share second place after 18 holes in Sotogrande with both teams recording totals of 18-under-par.

For the quartet of Pauline Roussin, Jana Melichova, Mim Sangkapong and amateur Ana Luisa Hernandez they played their front nine in seven-under and found their form on their back nine coming home in 11-under-par to be in second place.

“We had a really good day, our amateur Ana played amazing, and she really helped us out. We had birdies at the right moment on pretty much every hole, it was exciting, it was fun, and it was a really good day for all of us.”

While Team De Roey, made up of the Belgian captain plus Spain’s Carmen Alonso, Sweden’s Moa Folke and amateur Alberto Alvaro Wright, did not drop a shot on their first round blitzing the front nine to make the turn in 12-under before making up another six shots on the back nine to also be on 18-under-par.

And it was an excellent day for De Roey, who won the Individual title at the Aramco Team Series – Bangkok, as she sits in second place on the Individual leaderboard after shooting a round of 66 (-6).

“It was great out there,” said De Roey, who is fourth in the 2022 Race to Costa del Sol. “We have a good chemistry going with the team. We made a lot of birdies together. Our amateur did great as well, so I just loved every minute out there.

“I think this course is very challenging. It wasn't too windy today, so I took advantage of the shorter holes – the par-fives. As a team it's just great, the atmosphere, and I love to play good for a team. I love playing these events.”

“I really like the format because it is more relaxed. It's more like you can connect with people, and you’re cheering for each other. I do really enjoy it.”

Plenty of players in the mix for the Individual title

France’s Pauline Roussin and USA’s Nelly Korda sit in a share of fourth place on five-under-par after they shot rounds of 67.

In the Team competition, Team Pace and Team Ciganda are tied for fourth place on 16-under-par with four teams one shot further back.

The second round begins on Friday at 8.15am (local time) and it will see the conclusion of the Team event.