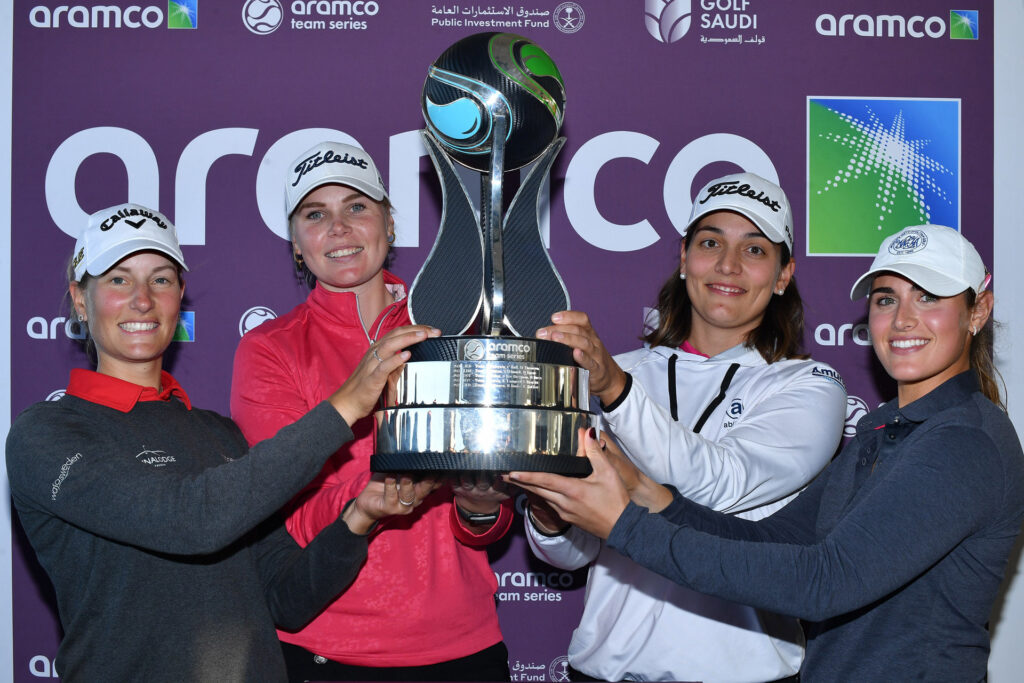 Team Gustavsson triumphed at the Aramco Team Series – New York as they recorded a final round of 17-under-par to secure a one-stroke victory.

After starting the day in a share of fourth place, Johanna Gustavsson, Jessica Karlsson, Karolin Lampert and amateur Jennifer Rosenberg came out firing on day two at Trump Golf Links at Ferry Point.

The quartet began the day on seven-under-par and produced a blistering front nine to reach the turn in 10-under before going seven-under on the back nine for a winning total of 24-under-par.

It was a first LET title for Gustavsson and Karlsson, while it is back-to-back victories in the Team event in New York for Lampert who was part of Team Jessica Korda in 2021.

“It's a win. It's a team win and it's just great to celebrate with the others and the joy is so much better when you share it as well.

“It's just been great and having Jennifer with us as well, she's got a bright future and is turning pro soon, and I think we'll see her again.”

“It was a very different team to last year,” said Lampert. “I think we had a great team spirit, all of us together. We have played a lot of rounds before with each other. We had a great amateur as well, she was great to play with, and it's always nice to be on the winning side.

“Yesterday we hadn’t even teed off and Jen said, ‘Guys, we are going to win this’ and we all looked at each other. It was blowing hard on the first and no one really said anything, then we didn't have the best start yesterday but on the back nine we started to make some putts and some birdies. Today was very good and all the other teams were looking at our score like what the hell are they doing.”

“It was so much fun. We had so much fun the last couple of days. It's great to share it with someone, so really good to get the win with the team.”

Two shots further back were Team Hewson and Team Henderson with a total of -21 and three teams finished in a share of fifth place with Team Maguire, Team Babnik and Team Stark on 19-under-par.

Thompson leading in the individual competition

In the individual competition, Lexi Thompson signed for a bogey-free round of 65 (-7) to be eight-under-par for the tournament after 36 holes in New York.

The Major winner made an eagle on the second hole before rolling in a birdie on the fourth and Thompson picked up the pace with another four birdies on the back nine to put her in pole position heading into the final day.

“It was overall a solid day,” she said. “I couldn't have asked for better weather compared to yesterday. It was a great day out there. Overall, I had a lot of fun with my team as well.

“There's a few gettable holes out there but at the same time there's a few tough holes especially with some pin locations they can put. It is a little softer due to the rain yesterday but it's a tough track and it can get windy out there because there's nothing blocking it, so you just have to take advantage of the easier holes.

“I do have confidence going into every day. You have to have it. Going into the week, I know the team aspect of it is always so much fun. Just coming out here and playing relaxed golf and being part of a team is always a lot of fun. We are playing for individual pride as well. I'm sure I will have to come out tomorrow and play my A game, but all I can focus on is my game and my emotions.”

Nelly Korda sits in second place individually just one shot behind Thompson on seven-under having carded a round of 67 (-5) on day two.

Sweden’s Madelene Sagström is third after 36 holes on five-under-par having shot rounds of 70 (-2) and 69 (-3), while Canada’s Brooke Henderson is in fourth place on four-under.

The Swedish Solheim Cup star said: “Not having to deal with as much wind or rain, we knew it was going to be nicer today. I tried to be aggressive. It was playing quite soft. I’m not super happy with my day but I still gave myself good chances out there.

“Every time you play golf, you try to do your best and you try to win out here. That's the mindset I've had all week and I can't wait for tomorrow.”

Four players are tied for fifth place with Anne Van Dam, Annabel Dimmock, Pia Babnik and Maja Stark all on two-under-par, and five players are one shot further back in a share of ninth place.