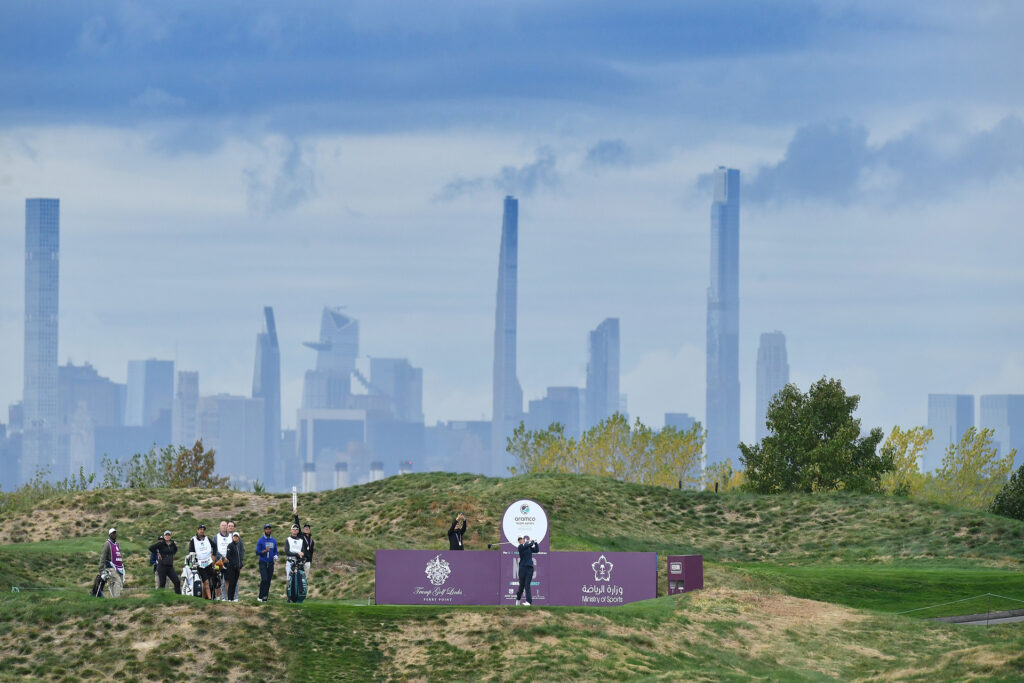 Team Maguire hold a one-shot lead in the team competition and Manon De Roey leads by two in the individual competition after the first day of the Aramco Team Series – New York.

The quartet made the turn in five-under having dropped just one shot on their front nine and came home in six-under to be at the top of the leaderboard on day one.

“We all got along really well and had a nice time out there,” said the Solheim Cup star. “We didn’t realise how long we’d been out there until we walked off the 18th green which is always a good sign. We dovetailed nicely and it’s always nice to be in the lead.

“It was a little nicer on the back nine, it’s a good test out there. It was playing long on a lot of holes with a lot of with woods and hybrids, so hopefully it will be a little kinder tomorrow. It worked pretty well today, so more of the same for tomorrow. A good night’s sleep tonight and we’ll be ready to go.”

Watch full coverage from round one of ATS - New York

Malik explained: “It’s really fun, it’s nice to have a team and be part of something that’s bigger. The time just flies by, and it keeps you playing for something more than just your own score.”

While amateur Tate, who is a former Super Bowl winner, spoke about what he learned from playing with Team Maguire. He said:

“I learned that they have a very unique way to stay composed throughout the weather and whatever the conditions are.

“It was incredible, they just always stayed calm, and their swings are so smooth and so in rhythm. I enjoyed just tagging along and watching them. They’re elite athletes and they’re doing some amazing things and I got to tag along and we’re sitting in the mix.”

The quartet had a very even day scoring five-under on the front nine and replicating that on the back nine to be one shot back after 18 holes.

“When I have a group like I have this week, I feel really good being the captain,” said Peláez, the 2022 Madrid Ladies Open champion. “They did a really, really good job in today's conditions. It was fun. We had a great time out there.

“The most important thing in tricky conditions is to be patient. Sometimes you're going to hit the best shot and you're not going have the best bounce, so I think being patient and just taking one shot at a time is going to be key.”

Korda said: “It was honestly a team battle today. The weather wasn't that great, so we were all saving each other and thankfully we all had each other's back. We played pretty well today. James made a lot of putts.”

Eight teams are in a share of fourth place on seven-under-par including Team Stark, Team Jessica Korda and Team De Roey.

And it was a good day for captain De Roey after she carded a bogey-free round of 68 (-4) to lead the individual standings by two shots.

“It was tough out there. We had some rain, strong winds. I just tried to keep it together for the team as well. I'm very happy with my performance. Every win is special, but I'm not thinking about that right now. I'm just going to keep going, do what I'm doing now. Today was solid, so I'll try to keep tomorrow the same.”

USA’s Nelly Korda and Sweden’s Madelene Sagström sit in second place on two-under-par having shot rounds of 70 on day one.

“It was tough, it was nothing like the practice rounds and it felt like we were back at the Women’s Open on the front nine,” said the Swedish star. “First there was the wind and then we got the rain and then we got all of it.

“It was so much fun playing with Flic [Johnson] and Becky [Brewerton], they’re great people and great players. We didn’t make as many birdies as we wanted to, but it was tough to get close to the pins and we’re happy with our solid round. We know tomorrow is going to be a new day. It’s cool to do something different.”

While American Lexi Thompson and two-time LET winner Pia Babnik sit one shot further back in fourth on one-under-par.

The second round begins on Friday at 8:45am (local time) and it will see the conclusion of the Team event.