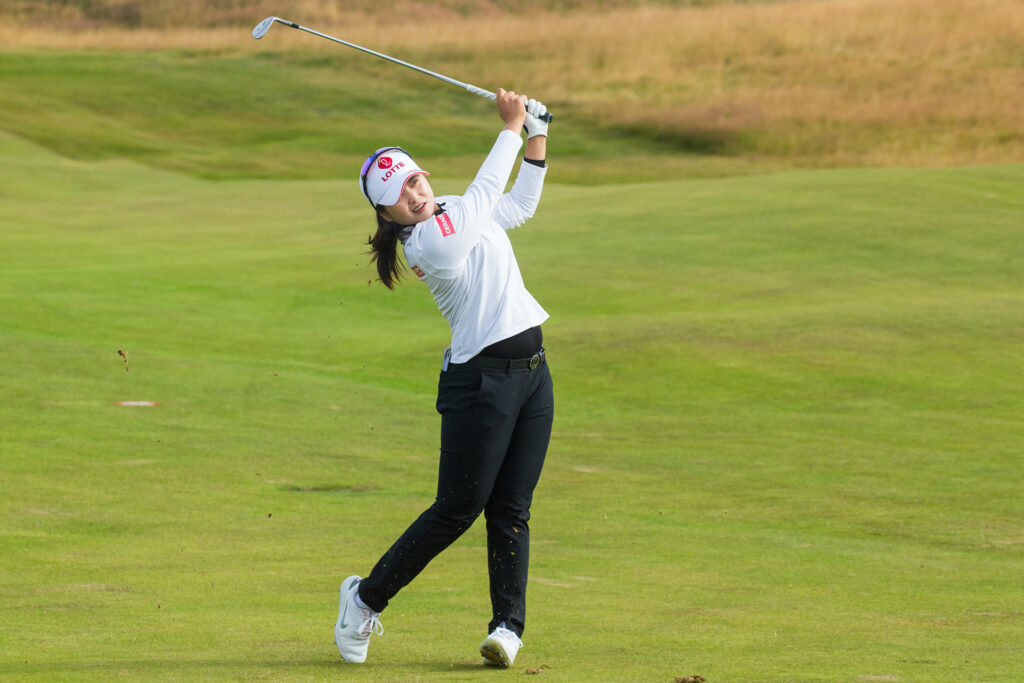 Korea’s Hye-Jin Choi fired a course record of 64, eight-under-par, to lead the Trust Golf Women’s Scottish Open at the end of the first day at Dundonald Links.

The 22-year-old began her round with two pars before making a bogey on the third hole, but after that she found her rhythm and rolled in an eagle on the fifth.

Choi then made three consecutive birdies on holes seven through nine before adding four more on her back nine including on the 18th to reach eight-under-par.

“Today I had really good shots overall,” said the leader. “But more than my shots, my putter was very good, so I had a lot of chances. I just made birdies when I got the chance and I played well with a good attitude on the rest of my holes.

“I had a lot of birdies and I made some really good putts today, so I just believed in my green-reading and just hit it. That really worked and all the balls hit the middle of hole. That helped me to keep up my confidence.”

Three players are tied for second place just one shot back with France’s Celine Boutier, American Lilia Vu and New Zealand’s Lydia Ko all on seven-under-par.

It was a bogey-free day for Boutier, who rolled in four birdies on the front nine and three on the back nine and contended with the heavy mid-afternoon rainfall.

“There was a little bit of everything,” said the three-time LET winner. “It was calm all day, but then there was a part in the middle that was really kind of crazy and the wind started picking up, too. Then it was really calm at the end.

“I think my putting was really solid all day. I feel like even when I missed greens and stuff and I had maybe five- or six-footers for par, I would make them. It was really helpful to get my putting today.

“It's my first time playing this course. I was kind of a little bit unsure what to expect. You just really have to go with the flow and it's kind of nice because you just don't have any expectations.”

It was a similar day for world number four Lydia Ko, who also produced a bogey-free round at Dundonald Links.

“Overall I thought I played pretty solidly, and I think when I did put myself out of position, I patiently and calmly approached how I needed to go about that hole. I’m happy with the way I started and hopefully I’ll be able to feed off the good momentum for the next few days.”

While Vu, who also sits on seven-under-par, only had one blemish on her scorecard dropping a shot at the 17th before rolling in another birdie on her final hole.

“It was a shaky start, honestly, the first three holes. I didn't find any fairways and I thought it was going to be a rough day,” said the three-time Epson Tour winner.

“But somehow, I made up-and-down from a couple areas, and I just kept my head down and tried to hit those fairways. Then it came along on the par-five, I was able to birdie, and I think that really got me going and then I just played one shot at a time.”

Georgia Hall in the hunt

Two players sit in a share of fifth place with England’s Georgia Hall and Korea’s Narin An both producing rounds of six-under 66.

And 2018 AIG Women’s Open champion Hall is enjoying being back at a course where she has played well in the past.

“I’m very happy with how I played today. Everything was pretty good, I didn't really miss a shot and managed to hole some good putts. I’m really happy and enjoying playing links golf again,” said Hall, who won the 2022 Aramco Saudi Ladies International.

“It's proper links. There are really tough holes as well, when you get near the sea on the other side, and I find it fairly easy to visualise shots. There's a lot of slopes on this course so I chip around and visualize and not just lob everything. You can chip around a lot.”

Harm explained: “I had a great round out there. Not a breath of wind. I was proud of myself that I could take advantage of that because you still have to make the birdies. My scorecard was clean, and I had a couple holes where it was a bit of a close call and had to make a smart decision.”