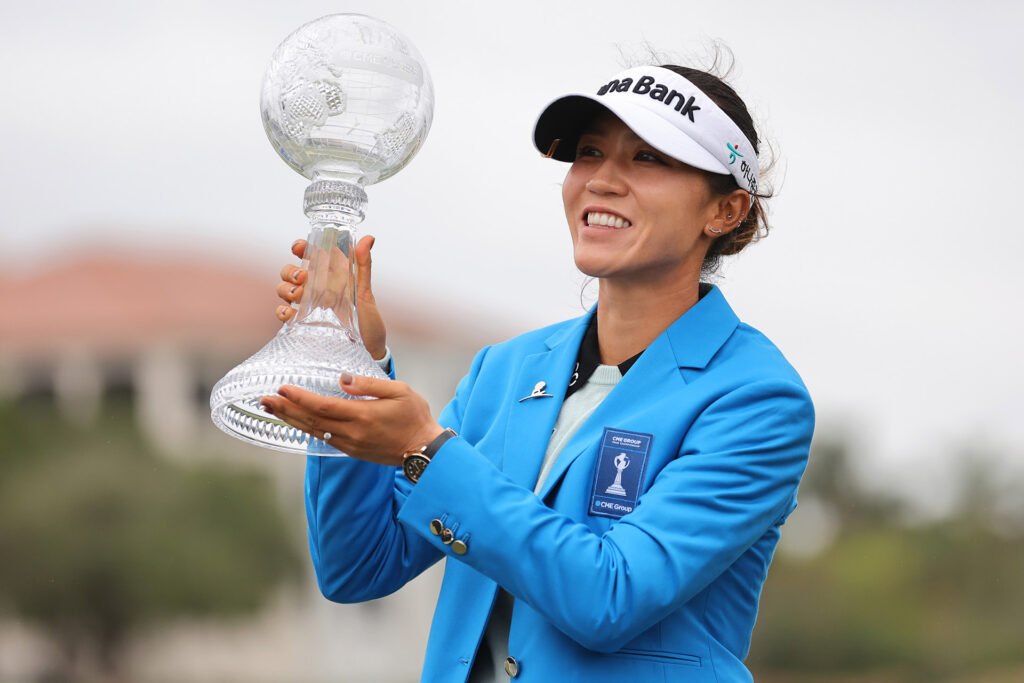 The DP World Tour Championship and the CME Group Tour Championship gave us impressive displays of golf, matched by impressive tournament prizes up for grabs, and two worthy individual winners. Rory is still everyone’s favourite golfer and remains on top of the world, with Lydia Ko matching his successes on the LPGA

Two smiling Europeans got a whole lot richer on Sunday; Jon Rahm was able to secure his third individual win at Jumeirah Estates Golf Club in Dubai as Rory McIlroy topped the points list for the fourth time – as well as finishing the season as World #1.

While Anna Nordqvist carded seven birdies in her final eleven holes and posted -14, Lydia Ko and Leona Maguire went head-to-head down the stretch. Ko pulled away with birdies on 16 and 17 to take home the $2m check and win the CME Group Tour Championship by two shots, for the second time in her illustrious career.

At 25-years-old, the career of Lydia Ko is astounding, two Player of the Year awards, 19 LPGA Tour wins including a break from the game - and it still feels as if she has been atop the leader boards for an age. It was eight years ago she won the CME Group Tour Championship – the same year Rory McIlroy won his last major. The two players have been centre stage throughout the 2021/22 season.

Unsurprisingly, the financials of the CME Group Tour Championship have been discussed in detail due to the huge portion dedicated to the winner.

The reason this tournament purse is turning heads is the percentage dedicated to the winner. Usually, the victor on the LPGA takes home 15% of the total purse, in men’s PGA events the figure is around 18%. For a $5 million purse, you’re hovering between $750,000 and just under $1m. The CME is unique in that it dedicates $2,000,000 to the winner - almost 30% of the purse.

The breakdown is as follows:

The top eight golfers were guaranteed six figures, with Nelly Korda, Celine Boutier, and Atthaya Thitikul sharing 10th place - earning 1.25% of the purse at around $87,500. Still not a bad week’s work. For full transparency, Yuka Saso and Patty Tavatanakit in last place still netted $40,000, or 0.57% of the purse.

The LPGA will break the $100m mark for the 2023 season, with regards to combined tournament purses. CME Group CEO Terry Duffy will want to continue this trajectory for the women’s game, with the CME boasting the grand finale at the end of every golfing season.

After such a wild 2022 in professional golf, the two tournaments this weekend were perhaps underrepresented in the media. The Official World Golf Ranking has been under scrutiny, particularly now that Jon Rahm has carded two wins, and four top fives in his last four starts, and still remains in the same position in the OWGR.

Rahm bagged only 21 points, whereas Adam Svensson took home 39 points for his win at the RSM Classic. The debate around whether field strength should influence ranking points is an interesting one, but opens the door to LIV Golf events joining the OWGR legitimately.

As the trophy was hoisted in the DP World Tour Championship, the CME Group Tour Championship was simultaneously approaching its finale and coming down to the wire. The best female golfers in the world were in Naples battling it out for a $2m winning prize, and the clash of events meant that coverage overlapped until the back nine on Sunday.

I think the CME was a success, and definitely a spectacle – although the Europeans were most definitely rooting for Leona Maguire to pull through for the win.

The importance of keeping sponsors happy

Terry Duffy was vocal all week in Naples, but offered mixed emotions during the event. At first, he addressed the fact that no LPGA Players had shown up for his invitational dinner before the event began.

“I am exceptionally disappointed with the leadership of the LPGA,” he continued. “They better get their act together because they’re going to lose people like me over stuff like this.”

Duffy has been central in the rapid rise of the tournament purse at this event, elevating it from $1.5m and a winner’s cheque of $500,000 in 2011, to $7m and $2m in 2022. The financial growth in women’s golf has been heralded by many, finally giving female professionals the platform they deserve and the rewards that make people take notice.

Duffy also said that he was “concerned about the future of the tour”. He emphasised the importance of players understanding how the game is grown, along with sponsors.

“There’s no one person, no two people who can grow it alone. You need everybody. They say it takes a village, and I think their village is getting a little fractured.”

Now, we have heard plenty about ‘growing the game’ and after the success of the CME Group Tour Championship last week; it appears that the increased tournament purses act as the focal point for doing so.

Enter Greg Norman, with his huge spending budget, and there is a very real future dilemma in the hands of LPGA Commissioner Mollie Marcoux.

Could a women's LIV Golf league be closer than we think? We take a closer look here.