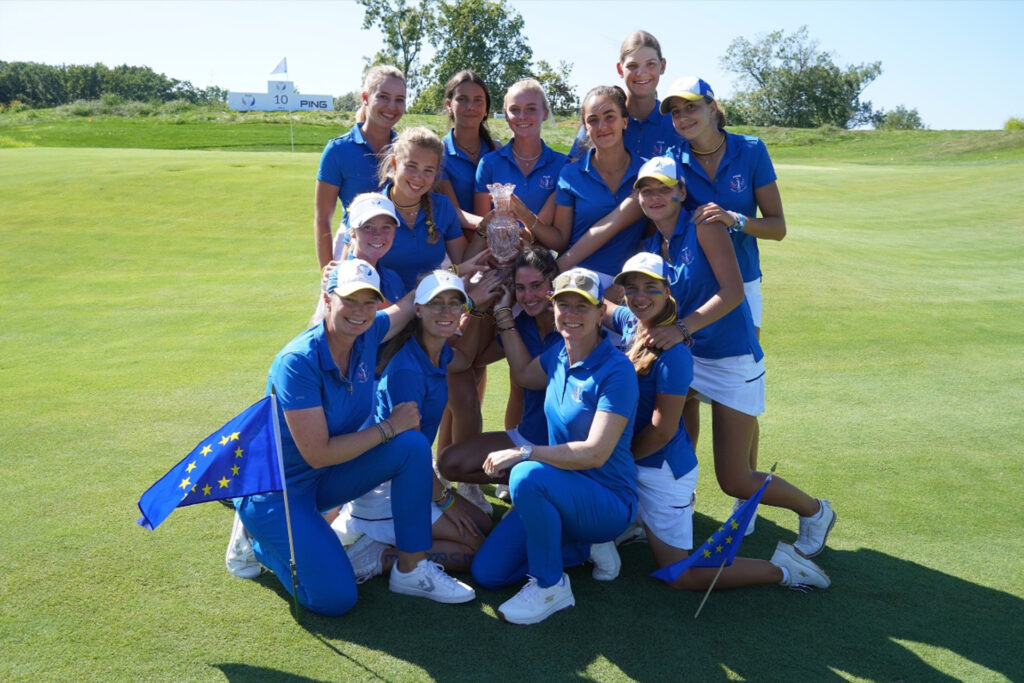 The European Team put on a stellar performance on the final day of the PING Junior Solheim Cup to triumph for the first time on US soil. The best under 18 girls from Europe overturned an 8-4 deficit to claim nine out of the 12 points on offer in the singles matches and win.

Captain Annika Sörenstam and Vice-Captain Nora Angehrn led their team with passion to secure the first European victory in 14 years. We spoke to Captain Sörenstam in the lead up to the event and she wanted to make sure that the team focused on having fun and that's something that certainly shone through on the final day.

Team USA leading into the singles

After leading at the end of day one, Team USA could not keep up with what Team Europe had in store for the twelve singles matches.

Needing at least 8.5 out of 12 points to secure the win, the European team won nine with eight wins and two half points.

Germany’s Paula Schulz-Hanßen opened the final day for Team Europe and was the first European to bring a point home for the team. The 18-year-old competed in the 2019 edition of the competition and used that experience to her advantage, as she secured a win of 2&1 over USA’s Catherine Rao.

Although Spain’s Andrea Revuelta came up short against USA’s Anna Davis (5&4), another Spanishwoman Cayetana Fernández fought until the last hole. She tied her match against Yana Wilson, who put pressure on the European with a 20-metre putt to save par on the 18th hole.

The Swedish duo in the team brought a point each after incredibly competitive performances.

Meja Örtengren made the comeback of the day after being down by four through nine holes, she managed to turn the score around and won 2&1 over American Kaitlyn Schroeder.

Örtengren’s compatriot Nora Sundberg followed her win on the same hole (3&1) over USA’s Bailey Shoemaker as she took the lead on hole 7 and did not look back.

Fiorellini defeated USA’s Kelly Xu 4&3 having lost only one hole and winning five, while Fouillet had an amazing start winning the second hole after holing out for eagle and was 4UP through nine holes.

Only a few moments later on the 15th hole, Germany’s Helen Briem secured her point after beating Alexa Pano 4&3, which left the European Team with only one point away from the victory.

Czechia’s Denisa Vodičková clinched the winning point after a spectacular victory on the 17th hole over Sara Im.

The Czech junior had a very even start of the round with her opponent but kept fighting to win three consecutive points on holes 12 to 14. She said:

“This has been such a great experience and I am so happy I was able to secure two out of three points for Team Europe and to represent my country. I had no idea that my score was the winning one so to have all the girls run up to me on the 17th green was just surreal. I will definitely keep working hard to have the chance to be nominated to the 2023 PING Junior Solheim Cup European Team.”

With two matches remaining, the European team could start their celebrations and enjoy the final two matches.

“I feel very proud, there’s a lot of emotions going through. It’s been such an honour to be the Captain for the European Team. I’ve been lucky to have some fun successes in my career and this is certainly one of them.

“Besides my family, I have dedicated my time to giving back to junior golf and it’s weeks like this that fill my heart with joy and my head with wonderful memories. This week, we saw the best the world has to offer in junior girls’ golf, and it makes me smile.

“The game of golf is in good hands, and I look forward to seeing all the girls succeed in the coming years.”

Hopefully, this bodes well for the Solheim Cup starting tomorrow...