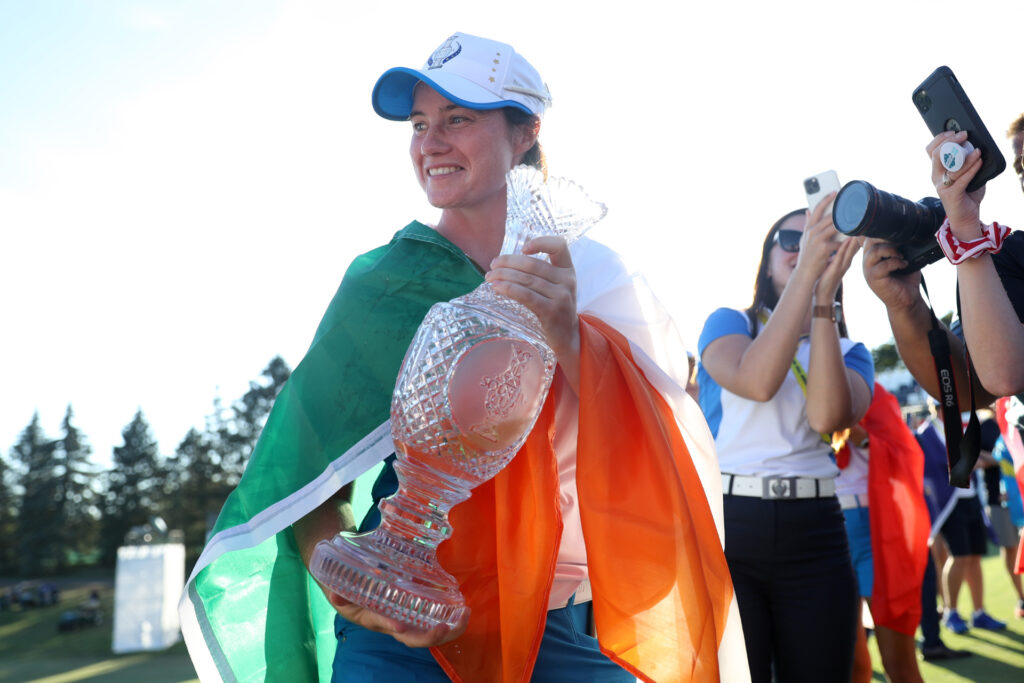 How one of Leona Maguire's closest mentors, her coach Shane O'Grady, is getting ready to witness a surge in female golfers across Ireland

Last week, the PGA’s Steven Carpenter spoke to Leona Maguire’s coach Shane O’Grady. Here he talks about how Maguire’s heroics at the 2021 Solheim Cup can inspire the next generation of female golfers in Ireland and boost the women’s game in the country.

PGA Professional O’Grady watched with pride from his home in County Meath as Maguire became a household name over the weekend following her incredible performance as Europe defeated USA in Toledo, Ohio to retain the Solheim Cup.

Maguire, 26, was instrumental in that victory, securing four-and-half points out of a possible five on her Solheim Cup debut. She was given a hero’s welcome home at PGA branded property, Slieve Russell Hotel, in Country Cavan last Thursday, but her rise to fame comes as no surprise to coach O’Grady.

The coaching professional based at Black Bush Golf Club, said:

“I’m a very, very proud coach! It was great that the world got to see that Leona is that good, because we know she’s been that good for a long time

“She’s been world number one as an amateur, she’s eighth on the money list in America, which is way higher than any other European player, and I think a lot of people wouldn’t have been aware of that.

“She’s a class act and I did expect her to be one of the top players in the Solheim Cup. It was very nice to see her do it, but she is a big achiever and always has been, going back to her performances in the Curtis Cup and everything else.

“I think Leona’s performance for Europe is massive for women’s golf in Ireland. The men’s game has always been strong in Ireland, but women, we have no standout players, but I think Leona is the first one.

“She’s got her card on the LPGA Tour and she’s now a Solheim Cup player. That gives the next generation someone they can look up to, and other players below her a pathway to follow in her footsteps and show that a female player in Ireland can achieve what Leona has achieved. It gives them a role model.”

Coaching the Maguire sisters for over 15 years

O’Grady has played a pivotal role in Maguire’s career ever since he was trusted to be her coach, along with twin sister Lisa when they were aged just 10-and-a-half.

“Anyone who came across the Maguire twins knew they were incredibly talented. It was an honour and privilege that their parents brought them to me and trusted me to help develop them.

“They played in the Irish Open when they were 12, won ladies’ amateur events when they were 13 and 14, just young girls, they were the youngest players to be part of the Curtis Cup team in Boston when they were just 15. They would have been on the radar for people in golf for a long, long time.”

The Cavan twins took the amateur game by storm, and while Lisa retired in 2019, Leona’s game went from strength-to-strength.

Helping to transition from the amatuer to the professional game

She is arguably one of the greatest female amateur players of all time, sitting on top of the World Amateur rankings for no fewer than 135 weeks. After turning professional in 2018, Maguire, who has represented Ireland at two Olympic Games, is now a regular on the LPGA Tour in America.

Asked how O’Grady has improved Leona as a player, he continued:

“I’ve worked with Leona on all different parts of her game, addressing weaknesses and strengths at different stages of her career.

“When she was at college in America she was a phenomenal ball striker and could hit it straight. As an amateur, Leona had the long game to compete, but we decided over the last year-and-a-half, because courses are getting longer, she needed that bit more length to compete week in, week out.

“Leona acquired that without losing her accuracy which is a big skill. A lot of people get longer, but they lose their accuracy.”

O’Grady has also improved Maguire’s putting game, so much so she was ranked number one last year in the putting average stats for the LPGA Tour.

“Her putting when she turned professional wasn’t at the level it needed to be for her to go on in the game.

“We did a huge amount of work behind the scenes in my indoor putting room/studio, but she also put in a lot of hard work; those things helped her get to that level. She wasn’t a bad putter in the first place by any means, but she’s an amazing putter and green reader now.

“Her bunker play has improved too. Playing on the LPGA Tour in California, Florida, Chicago etc, you come across different types of sands, so we’ve changed her bunker play a little bit to be more consistent out of the different sands.”

Adapting to new ways of coaching

The Covid-19 pandemic has impacted the way O’Grady is able to coach. But, like most, they have adapted to different ways of communicating in this digital era.

“Leona was here the Sunday before she went to the Solheim Cup and the Wednesday before that and we’ll be hooking up again next month, but with Covid-19, it has been difficult.

“It’s hard to travel so I haven’t been there at any events and I missed the Solheim Cup, which was a frustration, but Leona commuted back a lot.

“She spent January here because of the lockdown and then went out two weeks before the start of the LPGA Tour, whereas in the past she probably would have stayed out in America.

“But with video technology, I can be on the range with her in Australia to California and it’s just like you’re there, I can talk to her and we can go through things over the phone – it’s amazing.”

The future of women's golf in Ireland

Maguire’s performance in the Solheim Cup looks to have taken her game to another level. So, what does the future hold for Ireland’s latest golf sensation?

“Niall Horan owns her management company and when Leona broke into the top 50 in the world at 47, he texted her a well done message, and she texted him back and said ‘only another 46 to go Niall’. She’s always thinking about what she can do next – very driven.

“A year ago our target was to finish as high as she can on the LPGA Tour money list. There’s about seven tournaments left and their tour championship final isn’t until late November, so there’s a lot still to play for. To finish high up on that list in her rookie year would be massive.

“She’s a very grounded and humble girl. She’ll make time for anyone, but from Monday it’s back to work to prepare for her next tournament.

“It’s been very enjoyable watching her success and it’s great to see something you’ve worked so hard at behind the scenes, seeing her in the public view now is great.”