Women and Girls in Golf Week: Another record-breaking year 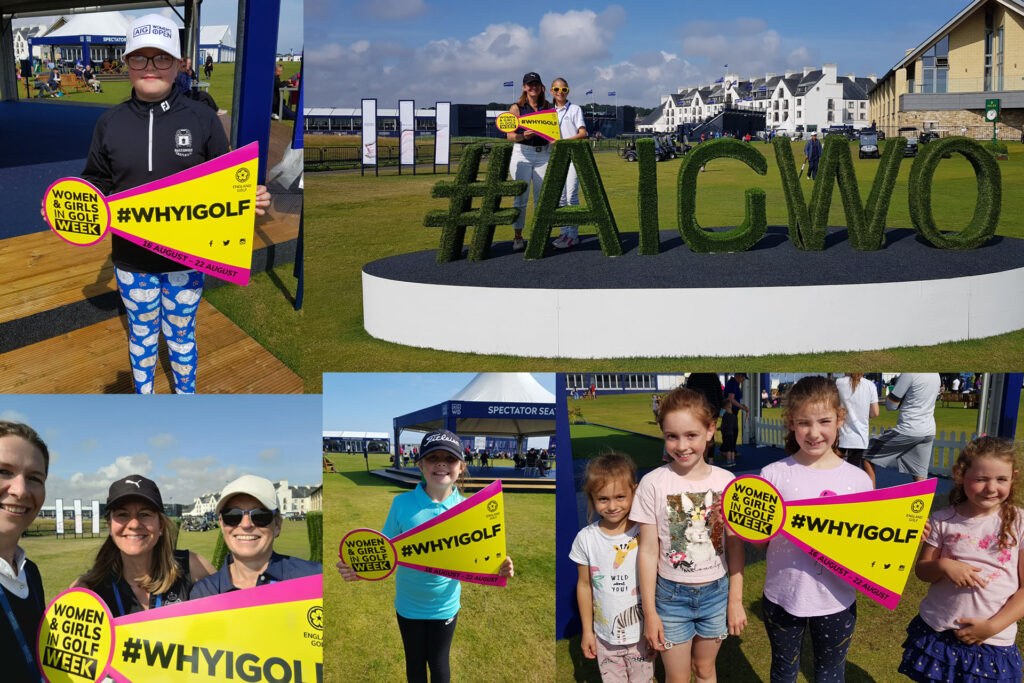 Women and Girls in Golf Week has created new records of engagement thanks to the 2021 edition highlighting inspiring and positive stories involving females and their participation at all levels of the game.

England Golf’s online digital campaign #WhyIGolf ran over seven days from Monday, August 16 and came to an exciting conclusion with the final round of the AIG Women’s Open at Carnoustie Golf Links on Sunday.

Throughout the course of the week, a mix of industry professionals, celebrities and everyday golfers took to social media to tell their #WhyIGolf stories and celebrate female successes in the sport – both on and off the course.

Each day of the campaign focused on a different theme including careers, volunteers, role models and competing.

It concluded by encouraging newcomers to ‘join the club’ by promoting the benefits of being part of a golfing community either through club membership or via England Golf’s new iGolf platform.

Statistical highlights from Women and Girls in Golf Week 2021 included:

“Our aim was to raise awareness of the female side of the game. And, with the support and collaboration of a committed group from within the golf industry as well as the wider golfing public, we’ve succeeded beyond our expectations and smashed the totals of last year.

“Four years in, we believe these figures indicate a need to keep the conversation going and continue to promote this great game and encourage more people to be a part of it.

“We’ve witnessed a great response from a wide range of women, girls and men who all joined in the conversation through the #WhyIGolf. That was fantastic to see.

“We’re already looking forward to next year's campaign which will once again coincide with the staging of the AIG Women’s Open.

“However, our work won’t stop here and we will channel the energy and enthusiasm generated by the 2021 campaign and continue in our mission to grow the game in the weeks and months ahead.”

One of our highlights was hosting a webinar staged by BIGGA to encourage the recruitment of female greenkeepers.

Broadcasters Naga Munchetty and Jenni Falconer gave their support to the campaign with video messages. Podcaster Rick Shiels – whose mum got him into golf – also spoke in support of the week.

Slingsby Gin’s Golf Cadets – Fleur East, Bela Shah, Natalie Pinkham and Helen Skelton – told us their story as they prepare to play in next month’s BMW Pro-Am just six months after picking up a club for the first time.

Sky Sports also helped spread the word with coverage during their AIG Women’s Open broadcasts including an interview with English golfer Annabel Dimmock.

Curtis Cup Captain and former English Women’s Amateur champion Elaine Ratcliffe gave an insight into how she combines her love of the game and her business degree to help run her own golf club.

England Golf graduate Mel Reid – named this week in the European Solheim Cup team for this year’s match against the USA – also gave her backing to the campaign.

An interview with 101-year-old Irene Chesterton from Doncaster Moor Town Golf Club confirmed that golf is a game for everyone regardless of age.

England Golf's official partner adidas played its part in the week by offering up a star prize of a complete head-to-toe outfit for one lucky winner.

Affiliated clubs and counties united behind the message sharing content on all our platforms or arranging taster sessions and activities while individual stories touched the hearts of the online community.

Women and Girls in Golf Week was also supported by men in the game - Darren Cook brought us the heart-warming story of how he introduced his daughter Evelyn into the sport as a way to help her live with Cerebral Palsy.

England Golf was backed by industry colleagues just as keen to increase participation levels among women and girls.

And the Midlands North Region hosted a girls’ festival at Trent Lock Golf and Country Club where 120 players of varying abilities engaged in a range of formats and fun competitions covered by Sky Sports News.

The #WhyIGolf week drew support from a wide range of industry partners who shared the messaging from the week.

Find out more about Women and Girls in Golf Week here.