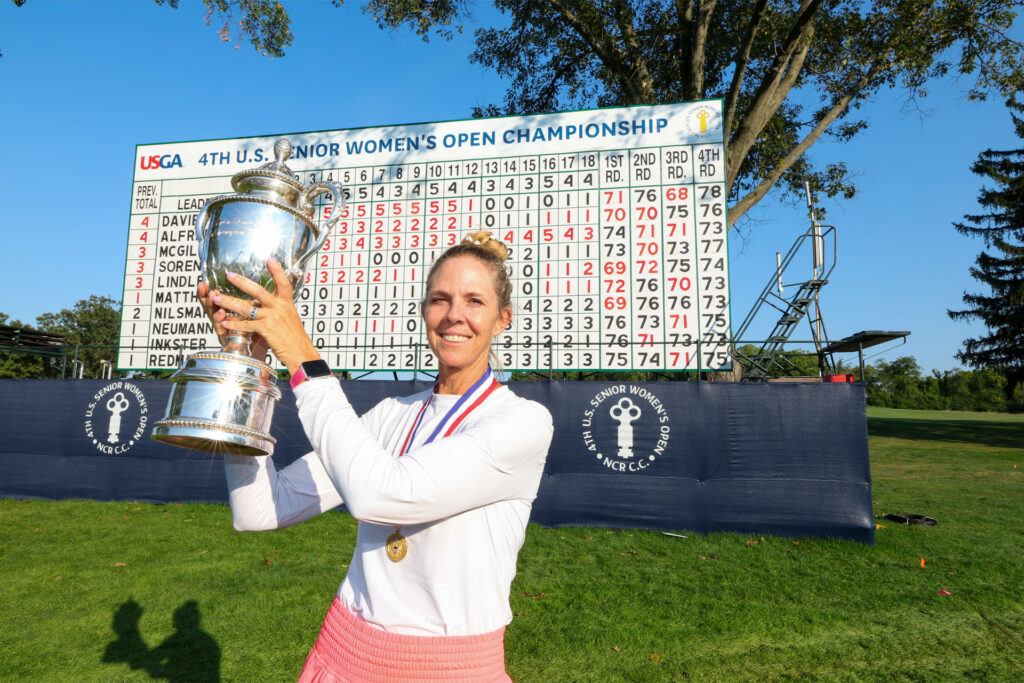 With the South Course at NCR Country Club at its brilliant and challenging best, McGill closed with an even-par 73 on a day when no one broke par to win the U.S. Senior Women’s Open by one stroke over Leta Lindley at three-under-par 289 in her first year of eligibility for the championship.

“That sounds amazing,” McGill said when introduced as the champion. “I love the USGA. I've loved it ever since I got spanked in my very first Junior Girls by Brandie Burton. That was a welcome to competitive golf.”

“I’ll have to set my schedule now,” said McGill when told about the exemption to Pebble Beach. “I look forward to it. That place is heaven on earth.”

This time, it was McGill who got the best of Sorenstam, the defending champion who was briefly tied with Laura Davies, the 2018 champ, and Helen Alfredsson, who won in 2019, for the final-round lead after a birdie on the first. But Sorenstam, who had trouble finding consistency all week, fell back with three consecutive bogeys beginning on the third and shot 77.

Meanwhile, McGill stayed focused on her own game.

“I knew at the turn I was a couple back, and from that point on, I really had no idea. I knew that I was close when I made a couple of birdies. I was disappointed with that bogey on 17. I tried not to focus on it. All I could do was what I could do, and whatever everybody else was doing was what they were doing.”

Lindley birdied the final hole to claim second place alone at two-under-par 290 with Alfredsson and Catriona Matthew at 291. Inkster was at 293 along with Sorenstam and Davies.

“Amazing, just amazing,” said Lindley after closing with a 74. “I can remember JoAnne [Carner] was 60 and she was still playing out on the LPGA Tour and I'm thinking, wow, 60. I don't know if I'm going to be playing golf at 60, but now that I'm here at 50, I think it's within the realm of possibility when I see all the amazing golf being played by my peers that are older than me.”

For much of the day it appeared that Davies would capture this title for the second time. When Davies made the turn at five-under-par, she was two shots ahead of McGill and three clear of Alfredsson.

Davies had not made a bogey since the eighth hole on Friday – a stretch of 39 holes – when she drove into left rough on 12, clipped a tree with her second shot, which went out of bounds, then hit another tree with her next shot. Davies eventually got to the green in six and two-putted for a quadruple-bogey eight.

"About as tough as I've ever known it, I think,” Davies, who was hobbled by a sore right Achilles, said about the demands of the course on Sunday. “I mean, it's just an accumulation,” she said about exhaustion that was apparent. “It's three weeks of walking with a hobble, the pressure of a final round, and well, I was going really well until the quad."

Sorenstam to take some time to reflect

Sorenstam, who won by eight shots last year, came in with high hopes but never found the reliable rhythm that was the hallmark of her World Golf Hall of Fame career:

“I didn't drive it well enough,” she said. “I made birdie on the first and felt great and then somehow just my wheels came off.” When asked if she will compete next year, Sorenstam said: “I don't know. I just got off the course. Right now, I'm not really thinking about that, but I'm definitely not going to play as much.”

The 1986 U.S. Women’s Open was plagued by a series of disasters – a toxic spill, storms, power outages, and earthquake and even a swarm of locusts. This year, everything was perfect, and on Sunday the South Course presented a most demanding challenge.

While several of the other contenders succumbed to the challenges of NCR, McGill was more than up to the task. It was a history-making performance.