Tour round-up: Six year wait over for Hull and Hughes 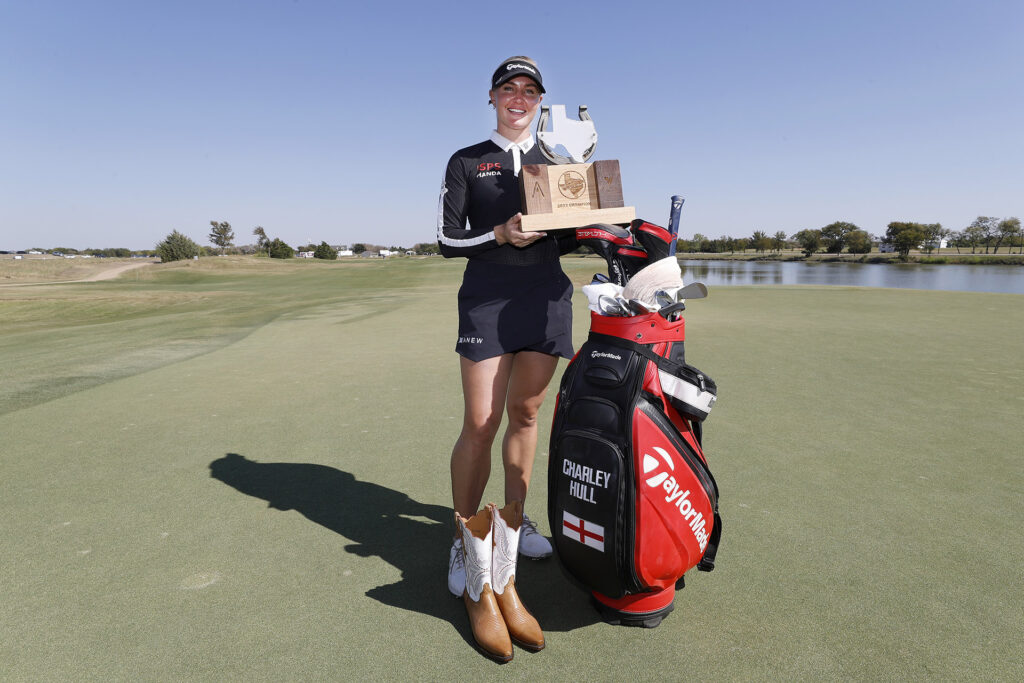 Charley Hull was back to winning ways on the LPGA Tour after a six year wait. It was a nerve-racking watch for Hull supporters as it came down to the final putt. This was Hull's first LPGA Tour victory since the CME Group Tour Championship in 2016.

Read the full report from The Ascendant LPGA benefiting Volunteers of America here.

It was an emotional victory for Ryan Fox as he won the Alfred Dunhill Links Championship at St Andrews by one shot over Sweden’s Alex Noren and England’s Callum Shinkwin.

The New Zealander started the final day four shots back from Richard Mansell. After seven holes Fox took the lead and he never really looked back. He was three clear with three to play, with a bogey on 17 not getting in the way of his victory.  It was a four-under-par final round which included seven birdies and three bogeys, to finish on 15-under-par.

It was the 35-year-old’s second victory on the DP World Tour this season after his win at the Ras Al Khaimah Classic in February.

There was one person on Fox’s mind after claiming victory. Last year, Fox had played alongside Shane Warne and finished second in the team event. He said:

“It means a hot. To be honest the only person I can really think of at the moment is Warne. Means a lot to this event and great mates, and just a shame he's not here. I'm going to enjoy feeling this one with the family.

“I definitely feel like he was there with me today. Obviously I did a few times this week. It's always been a special week for me. The last I think four years, I've got to play with Warne who is one of my idols growing up. He absolutely loved this tournament.

“Last time I saw him, we were here last year, and ran second in the team event on a count back and he was absolutely buzzing.

“He was missed by a lot of people this week, especially me. It was a strange feeling at the start of the week but also felt like he was there helping out and it was certainly nice to do it for him this week.”

The team event was won by Shinkwin and Alex Acquavella, winning by three shots on 37-under-par.

The DP World Tour now heads to Spain for three weeks with their first stop in Madrid and the acciona Open de España.

Hughes defeats Straka in a play-off

Final rounds of 69 from Hughes and 67 from Straka meant that there was a tie at the top on 17-under-par. They returned to the par four 18th hole and both made par. On the second attempt Hughes was able to hit his approach shot to eight feet, Straka missed his long birdie chance whilst the 31-year-old was able to make his.

Like Hull on the LPGA, Hughes was last in the winner’s circle in 2016. He commented:

"I'm over the moon. I had some moments today where I was tested and was able to pull through.

"It's kind of my M.O. a little bit...to scramble and save some pars. I had to do that a little bit today on the back nine. Yeah, did everything I possibly could, just grinded my butt off, and luckily it was good enough."

The inaugural Tuscaloosa Toyota Classic now has a low 54-hole record that’ll be tough to beat. Celine Borge fired an impressive nine-under-par 63 in the final round to go from seventh to champion. The Norwegian finished the tournament at 15-under-par.

“It feels very nice,” said Borge. “I just tried to stay focused on every shot and do my best on every shot. I didn’t look at the leaderboard.”

Borge went bogey-free on Sunday, carding seven birdies and a lone eagle. The Norwegian arrived in Tuscaloosa in 16th in the Ascensus Race for the Card standings and now heads to Daytona Beach for the Epson Tour Championship in fifth.

“I tried not to focus on that,” said Borge. “If I play good enough, I will get my LPGA Tour card when I’m good enough.”

One shot behind Borge in solo second place was Hyo Joon Jang. Jang recorded a five-under-par final round and a tournament total of 14-under-par. The Korean carded seven birdies on the day and is proud of her top finish.

“There were a lot of emotions today,” said Jang. “A little nervous but also excited and confident, for sure. I started with a bogey again, same as yesterday, so I wasn’t expecting anything. I was trying to focus on every shot and accept whatever result came out of it.”

Finishing in solo third, at 13-under-par, was Linnea Ström. The Swede carded six birdies on the day, five of which were on the front nine. Ström, who has already clinched 2023 membership on the LPGA Tour, is using her final events on the Epson Tour to fine tune parts of her game. She was happy with the progress she made this week and was even happier for Borge.

“I’m a little bit disappointed of my back nine today,” said Ström. “But overall, it was a very good week. I’m happy and super happy for Celine.”

Rounding out the top five were Bailey Tardy and Kiira Riihijarvi. Tardy finished in fourth place at 12-under-par, while Riihijarvi took fifth at 11-under-par after signing for a six-under-par round. A total of 51 players shot even-par or better.

The Epson Tour Championship, the final event of the season, takes place at LPGA International, Jones Course in Daytona Beach, Florida this week.