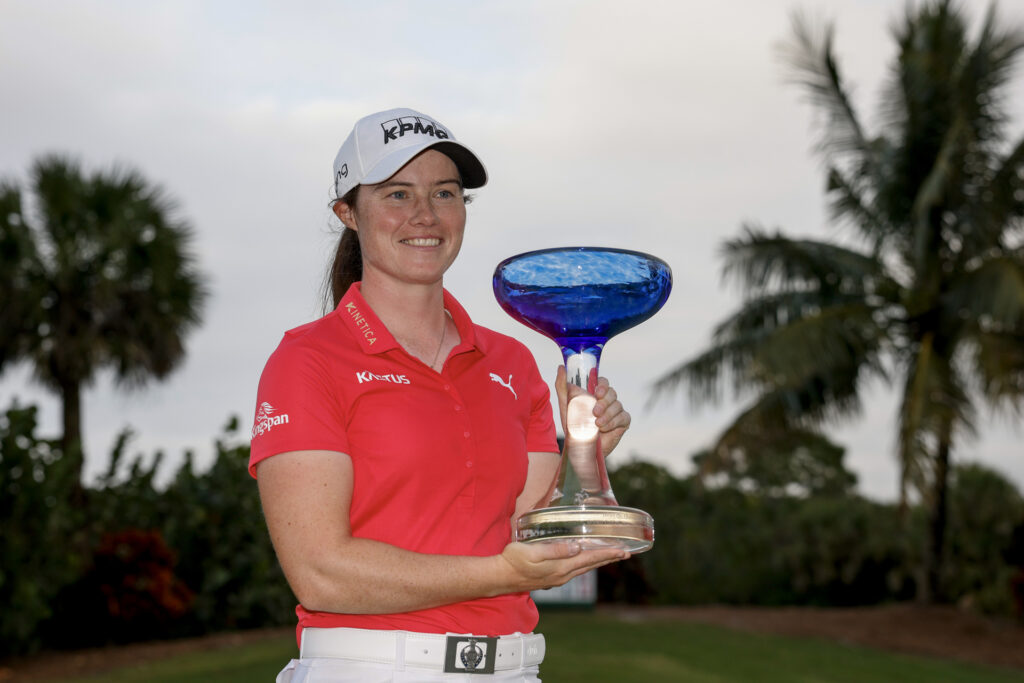 As Leona Maguire said straight after sinking her winning putt, “it’s been a long time coming, 17 years in the making”. The 27-year-old from Cavan, Ireland shot a final round 67 to cruise into the winner’s circle for the first time with a three-shot victory. It seems fitting that the inaugural LPGA Drive On Championship had Maguire as its winner, becoming the first woman from Ireland to win the Tour’s history.

Maguire gave the sports fans of Ireland another reason to celebrate on Saturday after their men's Six Nations dominant performance over Wales (29-7), earlier in the afternoon. Hopefully, there will be celebrations like the ones that were seen after Maguire's dominating Solheim Cup performance in September when she returns home in a week. Commenting on her win, she said:

“Hasn't really sunk in yet. It's a bit surreal. It's been a long time coming and I suppose you don't know it's going to happen until it actually does. I tried to just stay really patient today. Didn't get ahead of myself. Wanted to go out and just shoot a number. Didn't want anybody to have to hand it to me. I wanted to go out and win it myself and earn it. Yeah, just really proud of the way I played today.”

Inspiring the next generation in Ireland

Maguire didn’t look at any leaderboards until the 18th fairway and said that she tried to hit each shot as it came. Her win was an early birthday present for her Mum:

“It's my mom's birthday tomorrow so I guess this is a pretty good present for her. I'm not going to be home for it, but hopefully she'll get to celebrate this next week when I'm home. That'll be special.

“It's incredible to be the first Irish person and to show that it is possible from a girl from a small little town in Ireland to be able to compete against the best players in the world and win on the LPGA.”

Congratulations poured in across social media from management company Modest Golf and its co-founders Niall Horan and Mark McDonnell and sponsors including PUMA Golf. With her twin sister Lisa summing up the win perfectly:

Off-season work coming together for Thompson

Finishing in solo second was 11-time LPGA Tour winner Lexi Thompson. Playing in the penultimate grouping five strokes back of the lead, Thompson played her first seven holes 7-under-par, which included an eagle on 10. Finishing with a birdie on No. 18 after a bogey on 16, Thompson posted a final-round 65, -15 overall.

“I think it's all about just putting myself in contention. I've put in the work in the off-season, hours on the putting green, hours in the gym, and just working on myself and improvement. There's all I want to see. As athletes, we just continue to try to improve on our games and ourselves, and that's what I see. We just want to see the hard work pay off,” said Thompson.

Sarah Schmelzel made six birdies in her final seven holes to jump up the leaderboard into third at -14, her career-best finish on the LPGA Tour. Five players tied for fourth at -13, including overnight joint leader with Maguire, Marina Alex. Also, Brittany Altomare, who got off to a hot start thanks to five-straight birdies on Nos. 2-6.

LPGA Tour rookie Pauline Roussin-Bouchard and major champion Jeongeun Lee6 rounded out the top 10 in a tie for ninth at -12. Nelly Korda’s 8-under 64 moved her into a tie for 15th (-10) after starting the day at T45. Xiyu Lin and Aditi Ashok carded the lowest rounds of the week with a pair of 63s, both new career-low 18-hole scores.

The LPGA Tour returns on March 3 at the HSBC Women's World Championship in Singapore.

Nicolai Hojgaard wins in the desert

Another twin who was winning this weekend was Nicolai Hojgaard, the 20-year-old Dane won the Ras Al Khaimah Championship by four shots to claim his second DP World Tour title.

Hojgaard carded a four-under-par 68 on the final day at Al Hamra Golf Club, seeing him end the week on 24-under-par with England's Jordan Smith finishing in second.

The DP World Tour is spending a second week at the same course for the Ras Al Khaimah Classic.

American Tom Hoge made a string of bridies on the back nine at the AT&T Pebble Beach Pro-Am to claim his first PGA Tour title. The 32-year-old managed to keep his composure to hole a 22ft putt on the 17th, when Jordan Spieth was only able to make a bogey.

"I've always kind of got myself into position and then just felt a little bit uncomfortable on Sundays out there. Finally today I felt great the whole day and felt real calm, standing over those putts you need to make down the stretch. It's awesome. You work through so many hard times to be here and to finally pull one off feels incredible."

However, this wasn't the biggest talking point from the weekend at Pebble Beach, if you haven't seen it yet, take a look below at this shot from Spieth on Saturday

Heart in your mouth stuff which made you feel quite uneasy watching it. Spieth explained his thinking after, which included his thoughts on the danger involved, he said:

"If I felt like I was in real true danger of losing my life if I would have pulled the ball back and dropped it. It wasn't quite that severe. But it was enough to where I certainly couldn't put a normal swing or shot on it."

Here's hoping he never tries that again! A 68ft drop just isn't worth it to make par!

Next the PGA Tour heads to one of it's most popular events of the year, the WM Phoenix Open.

In a tightly-contested final round, the 20-year-old Serengeti golfer locked in her one-shot victory in the season-opener on four-over-par with a final round one-under-par 73.

“This is so unexpected; it’s surreal. Twelve months ago, I was still campaigning on the GolfRSA circuit and now I’m the first winner of the 2022 Sunshine Ladies Tour season."