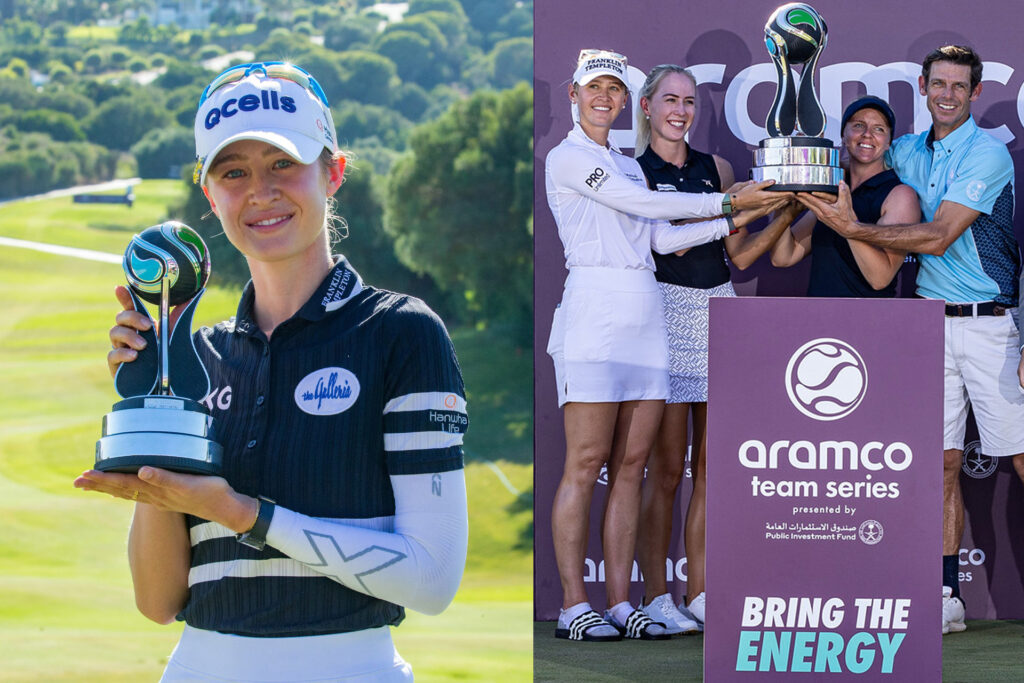 The Korda sisters dominated at the ATS - Sotogrande, whilst Patrick Cantlay sets himself up for his FedExCup title defence.

Whilst the LPGA Tour had a rest week, the Ladies European Tour was basking in the glorious Spanish sunshine at the Armaco Team Series - Sotogrande.

The Korda sisters were playing in Spain for the first time, a timely appearance nearly a year out from the Solheim Cup.

It seemed to agree with them as they dominated the event with Jessica taking the Team title whilst Nelly won the Individual - narrowly beating her sister.

Watch final round highlight from the Aramco Team Series - Sotogrande

This week the LET moves to Sweden and the Skafto Open, whilst the LPGA is in Canada for the CP Women's Open.

Patrick Cantlay became the fifth player this season to depend a title on the PGA Tour, with a one-shot victory at the BMW Championship.

A two-under-par final round at Wilmington Country Club, finishing birdie, par, was enough to see him beat fellow American Scott Stallings. Stallings jumped from 46 to 12 in the FedExCup standings.

With his victory, the second of the season, world number four Cantlay sits in second going into the season-ending Tour Championship. The 30-year-old will be looking to defend that title too. On his title defence, Cantlay said:

"I think every time I've tried to defend, I don't think I've been able to do it, but it's something that you definitely circle on your calendar as something you want to do. These golf courses, like I said earlier this week, reminded me a lot of each other, and I was glad not to go six holes in a play-off today."

The final 30 players competing at the TOUR Championship:

How does Cantlay feel heading into the TOUR Championship?

"I'm in a really good spot. It'll be a little different type of a challenge this year, obviously, being two behind Scottie. He's played a lot of great golf this year, so I expect the same. But it's a golf course I really like, and I'm looking forward to the challenge."

The German shot a final round six-under-par, 66, in a tournament reduced to 54 holes because of heavy rain on day three to edge out overnight leader Gavin Green at Albatross Golf Resort.

Green, who was also chasing his first title, took a three-shot lead into the final round. With five holes to play Green was three-under-par for his round and two shots ahead. But a double-bogey on the par-four 14th after hitting his tee shot into the water meant that he needed a birdie over the final four holes to force a play-off.

Unfortunately for Green his birdie putt from eight feet on the 18th to lipped out, securing Kieffer his breakthrough victory.

Talking after his win, the 32-year-old German said:

"It's tough right now to say what it means. It's great, I'm lost for words a little bit. You're thinking 'I want to be ready in case he makes birdie', you expect him to make birdie.

"You don't want other people to miss putts but when the guy from the TV said you've won it the feeling was just ridiculous. I don't know how I feel - I think I will need a few days!"

The DP World Tour now moves to one of the prettiest courses on their schedule Crans-sur-Sierre Golf Club for the Omega European Masters.