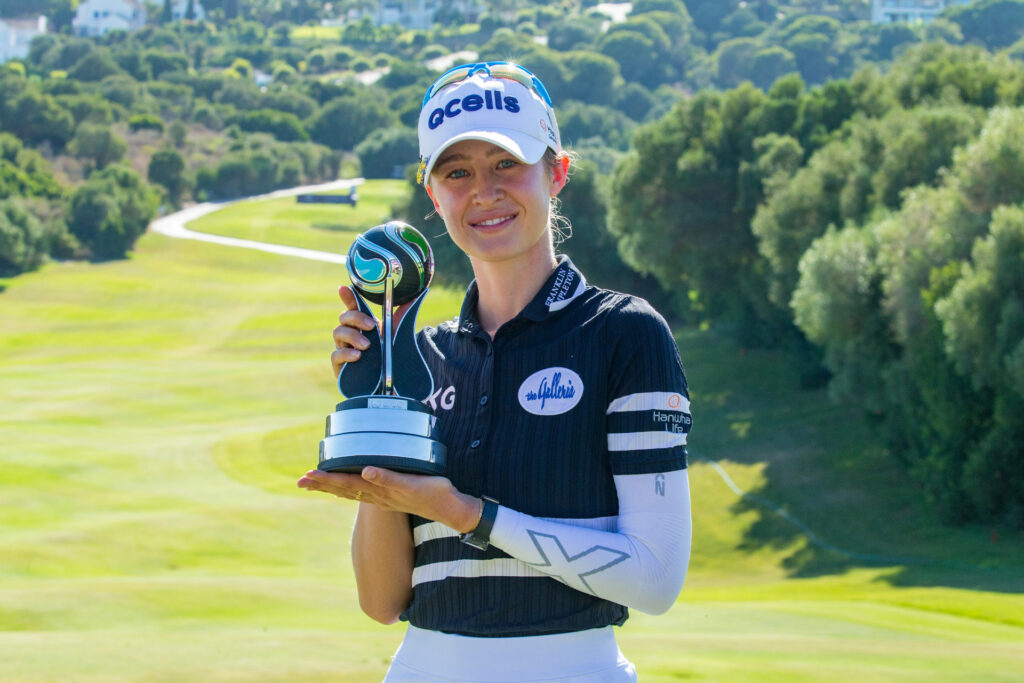 World number three Nelly Korda fired an excellent final round of 67 (-5) to win the Individual title at the Aramco Team Series – Sotogrande by three shots.

The Major champion began the day seven shots behind the overnight leader, her sister Jessica Korda who had secured the Team title the day before, and dropped a shot on the second hole.

But the Olympic champion soon found her feet rolling in three birdies on holes seven through nine and again on holes 12 through 14, before adding another on 16.

Despite making a bogey at the last, Korda sealed victory – her second on the LET – with a total score of 13-under-par at La Reserva Club de Sotogrande.

Watch Final Round highlight from the Aramco Team Series - Sotogrande

“I’m super excited to win,” said Major champion. “I haven’t won this year, so it feels nice to get a win under my belt but I’m also very sad as it wasn’t the day Jess was expecting. I guess we were hoping for a bit more of a battle going down the stretch, but it’s golf and that sometimes happens.

“I got a little unlucky on number two. I was right behind a tree in the fairway. I bogeyed that hole, so I was over par for the majority of the front nine, but I went on a little nice run. I had two turkeys on the scorecard, which was nice. I just stuck to it and told myself that there is a lot of opportunities out there and hopefully I can capitalise on them.

“The first two days were a bit loose; today was a little bit more intense playing with two other competitors in the final group and being pretty close to the lead. We were kind of going back and forth with the lead, but it's so fun playing those first two days with the team. It gives you a little bit different aspect of golf. I enjoyed it.”

Jessica had to settle for a share of second place

Three players finished in a share of second place with Jessica Korda, France’s Pauline Roussin and Spain’s Ana Peláez Trivino all on 10-under-par.

It was another consistent day for the Spaniard, who ended the week with a bogey-free round of 69 (-3) and finished as the top Spanish player.

“I had a pretty good day out there,” said the 2022 Madrid Ladies Open champion. “My front nine was very good, I had a couple of chances on the par-fives to get the lead down to two and maybe convert the birdies, but it didn’t happen.

“I was emotionally very calm until the end, and I think that’s what helped me finish in a tie for second place. I had so many people following me today, I love the energy that I feel when I know people are watching and I’m very happy with today’s round.

“It was definitely a good week to do well, I am always looking forward to the Solheim Cup in 2023 and this week was a great week to play and hopefully the captain is watching out for me.”

Roussin produced a third round of 71 (-1) with seven birdies, three bogeys and a triple bogey on her scorecard, while it wasn’t the day the older Korda sister would have wanted as she shot a round of five-over.

A career-best round for Matilda Castren

It was an excellent finish to the Individual competition for Finland’s Matilda Castren, who fired a scintillating final round of nine-under-par 63 – her career-best – to climb up the leaderboard to 11th place.

“I didn’t play very well in the first round, and I was frustrated and thinking about what to do in the next couple of weeks to get it together. Yesterday was promising I shot one-under, and I had some good shots and birdies.

“Today, everything seemed to go in. It was kind of challenging in the wind, but I still managed to hit the ball great, and it was one of those days where everything was going your way and the putts broke the right way and the wind helped you when it needed to.”

De Roey is still in fourth place with Argentina’s Maggie Simmermacher in fifth and England’s Georgia Hall in sixth.

South Africa’s Lee-Anne Pace remains in seventh spot with England’s Meghan MacLaren just behind, while Spain’s Peláez moves up to ninth place and now has 1,096.46 points with Finland’s Tiia Koivisto rounding out the top 10.