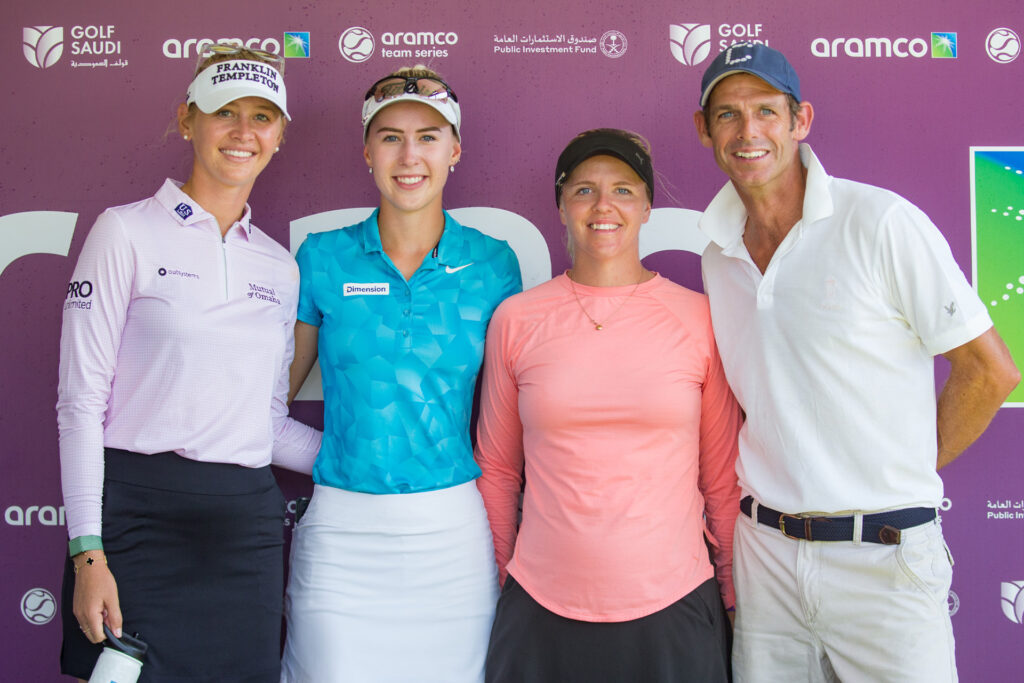 Team Jessica Korda win Aramco Team Series – Sotogrande on 33-under-par, winning by one shot, whilst Jessica holds a six-shot lead lead in the Individual competition with one round remaining.

Team Jessica Korda were victorious at the Aramco Team Series – Sotogrande as they recorded a final round of 14-under-par to secure a one-shot win at La Reserva Club de Sotogrande.

After starting the day in front, Jessica Korda, Tereza Melecka, Noora Komulainen and amateur Malcolm Borwick backed up their excellent first day of -19 with another great round to seal victory on 33-under-par in Spain.

It was a second win in this format for the older Korda sister – after her success at the 2021 Aramco Team Series – New York – while she also leads in the Individual tournament on 15-under-par with a six-stroke lead heading into the final day.

“I think we just really had a good vibe out there,” said the six-time LPGA Tour winner. “We tried to keep it as light as possible. It was a lot harder today.

“The wind was definitely up, so it was a bit tough, but everyone played and contributed. When somebody was out, another person had their back – the beauty of team golf.

“Malcolm played great. It was awesome. I think he shot the lowest round he's ever shot today, which was phenomenal. He was just a joy to be around and brought such a positive outlook on everything.”

“I really enjoyed playing with this team. Jess played so well yesterday. That was just so amazing to watch her firing 11-under and today Malcolm was playing incredible golf, so we had a lot of good time out there.”

For amateur Borwick, who is a polo player, it was an experience of a lifetime to be able to tee it up as a part of Team Jessica Korda. He said:

“I've had an incredible few days. I'm going to go back to playing polo. The nerves you get playing tournament golf is aging me as the days go on, but it's been incredible. Playing with the girls, frankly the level of professionalism and purity with which they hit the ball consistently is amazing.

“What we do in polo is much more of an adrenaline-based sport, much more reflexes. This is so cerebral. You have to reset every time and try and rub away the mistakes. I’m massively grateful for all the advice and the coaching and the good spirit. We had a really good time.”

Team Roussin ran the winners close also producing a round of 14-under-par on day two to finish in outright second place on -32.

It was a solid day for Captain Pauline Roussin, who followed up her first round of 67 (-5) with a round of 68 (-4) to be in second place in the Individual competition too.

“I'm satisfied with my day. I think it's two good rounds, especially today because with the wind was a bit more difficult. I had two silly mistakes on the greens, but it was a good round. I'm happy I finished with that birdie to finish on a good note, especially putting-wise.

“I'm really happy with what we've done with the team, and Ana our amateur, what she's done is just amazing. It’s an amazing experience for her, and we tried to make her feel comfortable. On 11 she said to me that the TV was stressing her out, I said do a silly face to it and just imagine you're on the range and taking a video. It's the same. She started playing a bit better after that.”

In the Team competition in a share of third place on 29-under-par were Team Hewson and Team Pace, after they shot rounds of -14 and -13, respectively.

“It was an up-and-down day, I didn’t get off to the best of starts but I holed a few putts on the back nine and made seven birdies, so pretty happy overall. My team did a fantastic job, we dovetailed really well for both of the days. I’m really proud of them and they did such a great job.”

“It has been fantastic. Our amateur was fantastic, he was so so good. Not only did he help out with the score, but he is just a fantastic guy. The rest of the team was great, there were lots of eagle and birdies flying around. We had a lot of fun and everyone fought right up until the end.”

Team Nelly Korda finished in fifth place on -28 with Team De Roey in sixth on -26, while Team Ciganda and Team Skarpnord finished T7 and four teams ended the tournament in a share of ninth place.

Tomorrow sees the conclusion of the Individual competition and behind her sister and Roussin is Nelly Korda, who sits in third place on eight-under-par.

“I hit it really good,” she said. “I had a bunch of lip-outs and close calls on my putts unfortunately, but that's golf. Sometimes – most of the time they don't go in – so I'm happy with three-under. I battled back after having an iffy front nine.

“It'll be fun. Pauline is playing really well too, and I think she's a shot closer to Jess, but you never know. You don't know what the wind is going to be like tomorrow. It could be blowing a lot more than it was today. It's golf and you always have a chance, and I'm going to stay positive going into tomorrow.”

One more day to go at the Armaco Team Series - Sototgrande

Spain’s Ana Peláez Trivino is in fourth place on seven-under-par having shot a round of 69 on day two at La Reserva.

“I'm in a pretty good position,” said the 2022 Madrid Ladies Open champion. “I played better than what my score shows but I still have tomorrow, and hopefully I can bring my AA game and have a nice round. I hit really good shots. My putts were good, they just weren't going in. It is what it is. It's golf, and I'll take the positive and work with that.”

Sweden’s Linn Grant and Belgium’s Manon De Roey sit in a tie for fifth place on six-under-par, Johanna Gustavsson and Pia Babnik are one shot further back in T7 with six players in a share of ninth place with one round remaining.

The cut fell at +4 with 65 players making it through to the final day of competition and the third round will begin at 8.50am local time on Saturday.