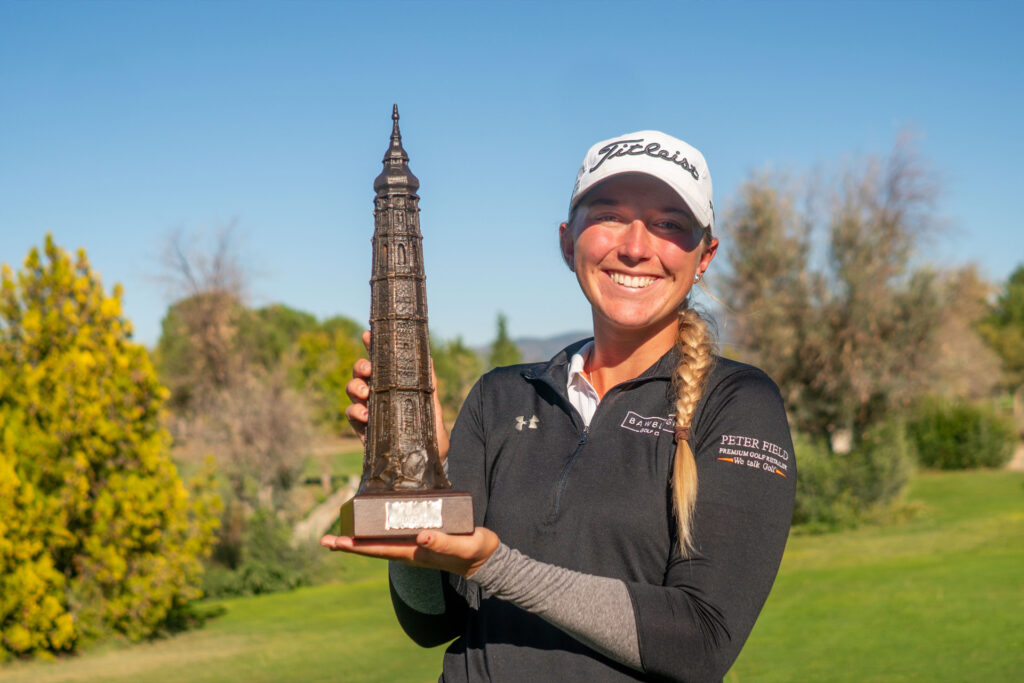 England’s Amy Taylor clinched her maiden LETAS win in the final event of the 2022 season after a four-way playoff at the Calatayud Ladies Open.

On an exciting final day at Gambito Golf Club Calatayud, four players were tied at the top of the leaderboard on nine-under-par after 54 holes.

Denmark’s Sofie Kibsgaard Nielsen, Swiss amateur Elena Moosmann, England’s Taylor and New Zealand’s Momoka Kobori all headed back down to the ninth hole for the play-off.

And it was the 21-year-old from Norwich who came out on top making a birdie at the par-three ninth to secure her first professional victory.

“It feels really good to win again and to get my first professional victory. Winning in the play-off is extra special because I played against three established players, so I really appreciate this trophy.

“Playing in the final round with Momoka was already a bit of a match play as we were making birdie putts towards the end of the round and kind of going back and forth.

“This is something I wanted to achieve for a while now. I didn’t win in college in the US so this is just a cherry on top of my first professional season.”

Denmark’s Kibsgaard Nielsen had an excellent final day as did Switzerland’s Moosmann, both firing the best rounds of the day with a 67 (-5).

It was an error-free day for the Dane, who made her birdies on the first, fourth, ninth, 13th, and 17th holes in Spain.

While Moosmann did have two bogeys on her card, she made up for that with seven birdies on the third, fourth, ninth, 13th, 14th, 16th, and 17th holes to finish low amateur of the tournament.

“I’m very happy with my season and excited I made it into the Final Stage of the LET Q School. Competing on LETAS this year was amazing; it feels like a family and the competition gets better every year.”

Overnight leader Kobori had a three-shot lead heading into the final day but started with a bogey at the first, however she bounced back with a birdie on the third before making a double bogey on six and a bogey on nine.

Despite that the two-time LETAS winner soon regained momentum rolling in birdies on 13, 16 and 17 for a round of level par.

Finishing in a share of fifth place in the final event were four players including Scotland’s Hannah McCook, who also produced one of the rounds of the day with a 67 (-5).

Three players finished in a tie for ninth place one shot further back with Norway’s Julie Boysen Hillestad, Germany’s Patricia Isabel Schmidt, and Marit Harryvan of the Netherlands all on four-under.

At the end of the final LETAS event of 2022, the top six in the Order of Merit clinched their LET cards for 2023 and they were Sara Kouskova, Chiara Noja, Kobori, Schmidt, Lauren Holmey, and Anna Magnusson.

Further 15 players ranked seven to 21 on the rankings secured their spots in the Final Stage of the LET Qualifying School:

The Final Stage of the LET Qualifying School will be held at Royal Golf La Manga Club from 17–21 December.