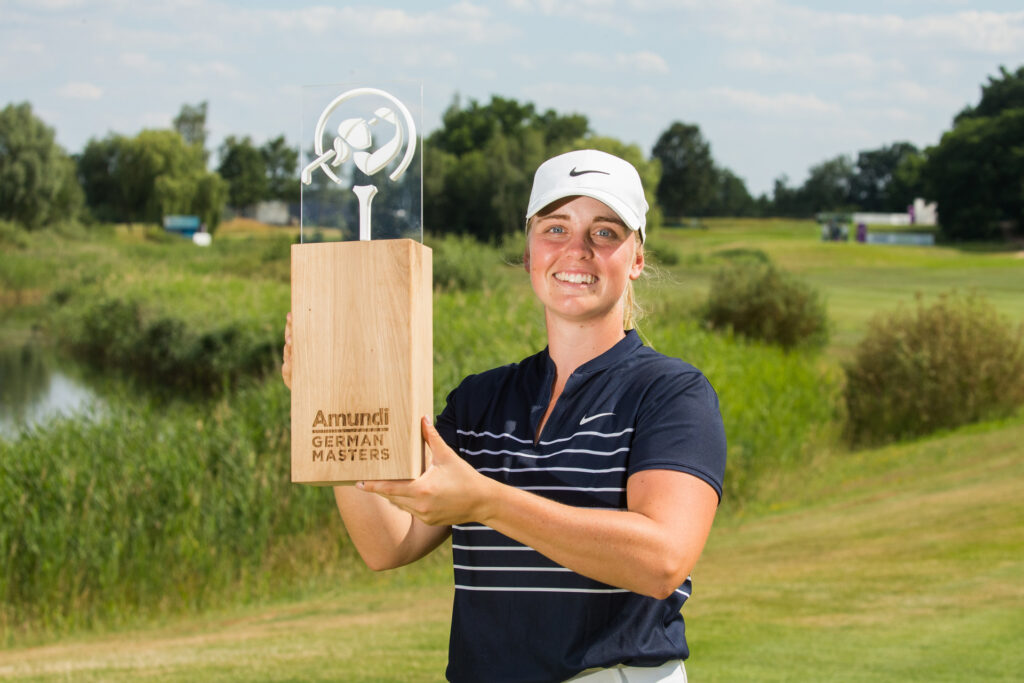 Maja Stark makes it four LET wins in less than a year, whilst Momoka Kobori has two wins out of four starts. As six more players book their spots at 150th Open

After beginning the final round in second place, the 22-year-old didn’t get off to the best of starts at Golf & Country Club Seddiner See with a bogey on the first.

But Stark soon made up for it with birdies on two and eight, before dropping another shot on the ninth to make the turn in even-par.

It was down the final stretch where the Swede impressed sinking a birdie on the 17th before leaving her second shot on 18 just millimetres short for a tap-in birdie to triumph with a total of 15-under-par.

“I was so nervous on 18 because I thought I had no chance of winning it after I messed up on 16 and I thought what am I doing? I won’t have anything to do with this and then I finally made a putt on 17.

“I could barely feel my hands on the 18th tee box, but I thought just go and I had a good drive and there was nothing to lose really. It has been a frustrating round for sure, I don’t think I’ve ever hit a putt like this and I’m happy it’s over.”

“My caddie was really good! He is 15-years-old and has a 0.6 handicap, he is from here and he was perfect. He did nothing wrong all day, I’m super impressed.”

Germany’s Leonie Harm and Sweden’s Jessica Karlsson finished in a tie for second place one shot behind the winner on 14-under-par.

Karlsson, who had led from the front, had a great start to her final day rolling in birdies on the first, fourth and eighth holes to put herself in pole position.

Bogeys on 10 and 12 brought the Swede back to the pack, but she extended her lead with a birdie on the 13th before two bogeys in her final two holes meant she finished in second place – her best-ever result on the LET.

While Harm finished as the leading German carding a bogey-free final round of 68 (-4) to equal her best-ever result on Tour.

“Maja is a fantastic player, so when she is on it, I guess we all just have to watch and learn. I’m proud of my own round too because in the warm-up that wasn’t quite guaranteed. I wasn’t hitting great shots warming up and I spoke to my caddie and said today is going to be a grind.

“Then suddenly, I was sticking them close and making very few mistakes into the greens which meant I kept my scorecard pretty clean, and I could take advantage of the chances I had.

“I was just trying to play my personal best shot for shot and enjoy the moment of playing well in front of German crowds which was really cool. It’s great that we get inspired by our home crowds supporting us and that’s great for women’s golf.”

Four players finished in a share of fourth place on 13-under-par with German duo Polly Mack – whole holed her second shot on 18 – and Olivia Cowan alongside Sweden’s Linn Grant and Scotland’s Laura Beveridge.

Two-time LET winner Esther Henseleit ended the tournament in eighth on 12-under-par with Morocco’s Ines Laklalech, after the duo produced rounds of 67 and 68 respectively, and Czechia’s Klara Spilkova rounded out the top 10 on nine-under-par.

In the 2022 Race to Costa del Sol, Stark has overtaken compatriot and friend Grant and leads the standings once again with 2,252.50 points.

Grant is second with 2,105.64 and Sweden’s Johanna Gustavsson completes the top three with 1,755.33 points while the rest of the top 10 stays the same as before. Harm now sits in 12th place with 774.44 points while Karlsson has moved up to 41st, the full standings can be found here.

The 23-year-old sensation, who arrived in Europe only four weeks ago, started the final day one shot ahead and quickly turned that into a two-shot advantage with a birdie on the first hole.

Kobori’s only dropped shot of the round came on the par-five seventh as she made the turn in 36 and she then rolled in three birdies on the back nine including on the last hole to card a round of 70 (-3) and finish on eight-under-par.

“It definitely helped to start off with a birdie and get myself going. Surprisingly I felt pretty relaxed today, and I had a great day playing with Hannah [McCook] and Lauren [Holmey],” said Kobori.

“Coming down the last hole I was feeling really excited about what I have been able to do this week, putting together three rounds of golf under par.

“I am very glad I was able to do it back in France again. I’d definitely be happy to come back in the near future.”

And the two-time LETAS winner acknowledged the challenge and difficulty of the golf course at Aa Saint-Omer Golf Club, which made her appreciate the result even more.

She added: “This course was a great challenge, and it was put together in amazing conditions. I was just happy to keep it steady and make a few birdies coming in.”

The New Zealander has had a fabulous ride in the past four weeks in Europe, adding seventh and second place finishes to her two triumphs.

Even though LETAS and the men’s Alps Tour held two separate events on the same golf course with pars 73 and 71, respectively, Kobori enjoyed playing alongside the men’s field this week.

She explained: “We are so used to playing in just a field of us women but for me coming from New Zealand, we have a lot of mixed events as well. It’s a lot of fun to mix it up from time to time.

“It was also awesome to see many people out there watching us and the guys, a lot of kids came which is truly amazing.”

Tied for second place on four-under-par was Dutch amateur Lauren Holmey alongside Spain’s Noemi Jimenez Martin, who fired the round of the tournament a seven-under 66 on day three.

Scotland’s Hannah McCook and local amateur Lilas Pinthier finished in a share of fourth place on two-under-par with the Frenchwoman carding a final round of 70 (-3).

Two shots back and rounding out the top 10 in a tie for sixth place were Norway’s Dorthea Forbrigd, France’s Yvie Chaucheprat, Finland’s Niina Liias and German duo Chiara Noja and Patricia Isabel Schmidt.

In the men’s tournament, where the course was set up as par 71, Dutch golfer Davey Porsius shot a final round of one-under 70 to triumph by one shot with a total of four-under-par.

Italy’s Gregorio De Leo finished one shot back in outright second and a trio of players were another stroke back in a tie for third.

In the LETAS Order of Merit, Kobori now leads the standings after securing her second victory and she has 1,313.75 points having played four events.

Meronk started the day with a one-shot lead, but it wasn't until late in his round that he went birdie, birdie, eagle (15,16,17) to put a clear gap between him and the chasing pack.

"It's such a relief, to be honest. I've been coming quite close and to finally open the door is just a dream come true. That's what we practice for every day and it's such a relief - I'm super happy!"

Ahead of The Open it's the co-sanctioned Genesis Scottish Open at The Renaissance Club.

It's been nearly three years since JT Poston won on the PGA Tour, so he made sure he did it in style. The 29-year-old American went wire-to-wire at the John Deere Classic. Not only did Poston win by three shots, he also booked his first appearance at The Open next week.

Poston took a three-shot lead into the final day at TPC Deere Run, posting a two-under-par 69 to end the week on 21-under-par.

South African Christiaan Bezuidenhout and Argentinian Emiliano Grillo finished in a share of second place and also secured their spots at the 150th Open championship at St Andrews.

On heading to Scotland, Poston said:

"I've always wanted to play in one of those at any of the venues, but for my first one to be at St Andrews and for the 150th - I can't wait there and can't wait to see what it's like!"

Although Poston isn't in the field, there will be some much needed Links preparation at the co-sanctioned Genesis Scottish Open.