Tour round-up: A close finish in California whilst Stark dominates Down Under 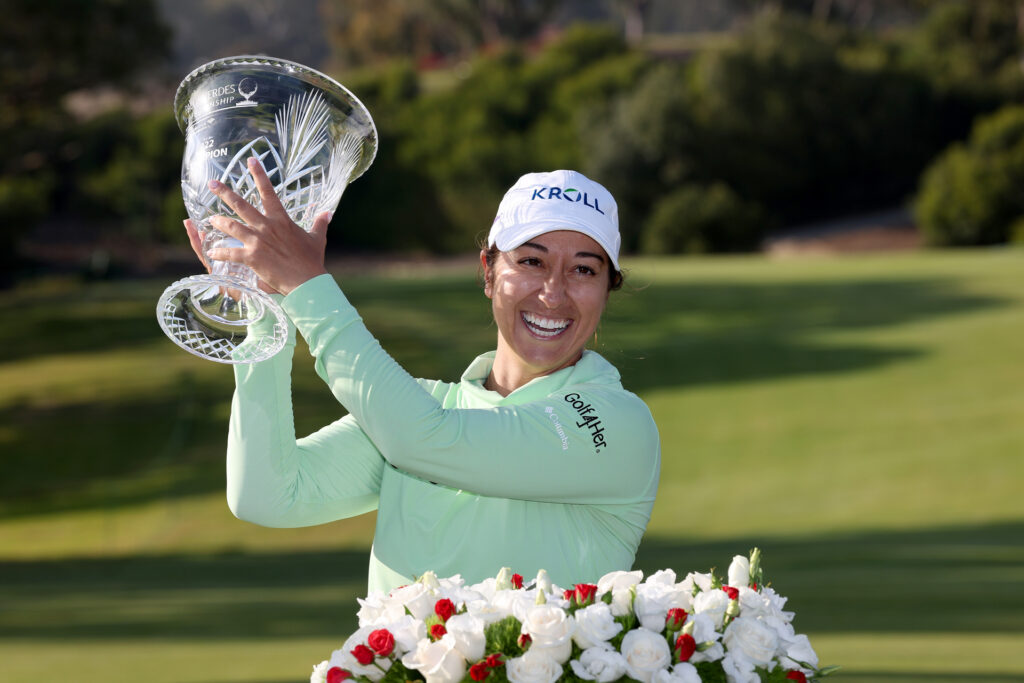 Marina Alex comes back from injury, Maja Stark makes it three wins in 11 starts, plus much more. Here's our weekly tour round-up.

Getting your first win on the LPGA Tour is hard. But if you ask 31-year-old Marina Alex, the second one is even more so. Alex began the final round of the Palos Verdes Championship presented by Bank of America three shots back of 54-hole leader Hannah Green and dug deep on the final day, posting a 5-under-par 66 to beat World number one Jin Young Ko by a single stroke at ten-under-par.

“I was almost glad that I got off to a little bit of a rocky start because I was like, you know what? I got all that anxious anxiety, whatever kind of nervous energy out of my system. At that point, I kind of glanced at the leaderboard. I saw that Megan (Khang) had maybe gone like three-under-par through three straight out of the gate. I was like, okay, it's game on. There are scores to be had out here. If I'm going to sit around and just try and make pars it's not going to win anything.”

This is Alex’s first victory since the 2018 Portland Classic – she won that event by four shots over Georgia Hall – and the first time she’s been in the mix since the LPGA Drive On Championship at Crown Colony earlier this year where she finished in a tie for fourth.

Watch the Final Round Highlights from the 2022 Palos Verdes Championship

Though her week at Palos Verdes Golf Club seems to say otherwise, Marina has had a tough journey the last few years, battling a back injury that she said was caused by overuse during the Covid-19 pandemic, one that seemed like it could end Alex’s career. Now that she’s healthy and her game back is in form with the help of swing coach Claude Harmon III, the possibilities seem endless as she sets her sights on the Cognizant Founders Cup in her home state of New Jersey.

“I'm not going to lie. If you had talked to me last year or the beginning of even this year, I didn't think there was even a remote possibility that I was going to win ever again. I didn't know how much longer I really wanted to be golfing ever again. I'm getting older. My back has been a struggle.

"I went into this year and I was like, I don't know how many more years I'm going to play if I'm being perfectly honest. I just want to give it my absolute best this year and put every single opportunity into playing and putting myself in contention and trying to win tournaments. It's amazing that it's happened.”

Thirteen-time LPGA Tour winner Jin Young Ko also carded a final round 66 on Sunday to give herself a shot at the title, but ultimately fell just short at nine-under-par total.

Women & Golf Tour Ambassador Gemma Dryburgh had a share of the lead after eight holes and eight-under-par but a double bogey on nine proved too much to battle back from and she finished on three-under-par and a tie for 21st.

Also of note was Augusta National Women's Amateur champion Anna Davis who mad her LPGA debut on a sponsor's invite. The 16-year-old made the cut and finished 70th.

The LPGA now has a week off.

The 22-year-old led from day one at Coolangatta & Tweed Heads Golf Club and carded a fourth round two-under-par 70 to finish on 15-under-par and seal the win ahead of compatriot Johanna Gustavsson.

Commenting on her victory, Stark said:

“I am super happy to get my third win on Tour. It was a slow start to the season in the US and then a couple of second places, so I’m very happy to get the win.

“I started with a birdie on one, so that helped but then it was a birdie drought for a long time until I made a bogey. Then I had to get my act together and finish well. I was a bit stressed because Johanna was playing so good.”

After a birdie on the first, Stark then dropped a shot on the 12th while Gustavsson sunk three birdies on her front nine to be within touching distance.

But the final five holes saw Stark make three birdies and one bogey to seal her third LET win since turning professional last August and claim the Jan Stephenson Trophy.

“It felt like it could slip away, Johanna was just one shot back for a while, so I don’t know if it made me stressed.

“I didn’t feel my heartbeat or my heart racing this round, but I get in my head a lot when I feel like I’m not playing as well as other people and they’re catching up. I don’t enjoy starting a Sunday with a lead.

“On 15, it was so nice to finally have a short birdie putt and being able to make that I was so happy and relieved because it felt like it had been forever. When I was on 18, it was a perfect ending to a stressful day.”

Gustavsson began the day four shots back but had soon made up that ground and was within one shot of the lead after 12 holes.

However, three consecutive bogeys saw the 29-year-old drop back but a birdie on 18 sealed a second-place finish for the Swede.

“I was very calm all day, I didn’t really think Maja would let me in. I started really strong and putted really well and had a lot of chances,” said Gustavsson.

“A few of them went in early on, but then I hit some bad shots and I think Maja could breathe again. Overall, I’m really happy. It is a nice way for me to finish this long stretch, I started with a second place, and I am finishing it with a second place.”

Argentina’s Magdalena Simmermacher produced a final round of 71 (-1) for a total of nine-under-par to finish in third place for the second week in a row.

Scotland’s Michele Thomson and Australian Cassie Porter finished the tournament tied for fourth place on eight-under with England’s Hannah Burke and Wales’ Lydia Hall one shot further back in sixth.

Australian amateur Sarah Hammett finished as the best amateur for the second week running, carding a 67 (-5) on the final day to be eighth alongside England’s Alice Hewson.

While another two amateurs Australia’s Kirsten Rudgeley and Malaysia’s Jeneath Wong finished in a share of 10th place on five-under-par.

In the 2022 Race to Costa del Sol, Stark has extended her advantage at the top of the rankings and now leads by 547 points over Argentina’s Simmermacher, who has 840.50 points.

Scotland’s Thomson moves up to seventh with 572.21 points while Georgia Hall and Esther Henseleit both have 500 points apiece in eighth and Kim Metraux rounds out the top 10.

From Australia to Spain, this week the tour is in Madrid for the Comunidad De Madrid Ladies Open.

Glory in Garden City for Gabby Then

Gabriella Then secured her first Epson Tour victory at the Garden City Charity Classic with a 5-under-par 67 in the final round. Her 27-foot eagle putt on the par-5 16th sealed the two-shot win as the University of Southern California alumna finished 12-under-par at Buffalo Dunes Golf Course in Garden City, Kan.

She becomes the third straight first-time winner of the 2022 Epson Tour season.

“I can’t believe it happened. After doing this since 2017, I’ve been through so much and never imagined I would win an Epson Tour event one day. The feeling is amazing.”

A birdie on the first helped Then start on the right foot. She recorded four birdies in her first 10 holes for a four-shot advantage at the time.

“It was awesome to open the day with a birdie and it really helped my momentum. Just like the second round, I tried to stay patient and wait for birdie opportunities, then capitalize when I could. I was really confident with my putting.”

Alexa Pano kept things interesting on the back nine. She converted birdies at 12, 13 and 16 to trim Then’s lead to one before the eagle by Then closed the door.

Pano carded a final-round 67 and ultimately finished runner-up at 10-under-par in her second start as a pro.

An Epson Tour rookie in 2017, this moment for Then has been a long time in the making but it’s one that was bolstered in 2021 by her reinvigorated dedication to the game. The 26-year-old won LET Q-School in December and now splits her time between tours.

An exciting season awaits for Then.

The next Epson Tour event is on May 20-22, the OA Golf Classic presented by LPT Realty at Alaqua Country Club in Florida.

Jon Rahm went wire-to-wire at the first playing of the Mexico Open at Vidanta Vallarta to secure his seventh PGA Tour title.

The 27-year-old Spaniard shot a final round 69 to finish on 17-under-par and win by one shot over Americans Tony Finau, Brandon Wu and Kurt Kitayama. Both Finau and Wu carded eight-under-par 63s to put pressure on Rahm.

"It was a pretty stressful weekend all the way to the end.

"I let my frustrations out a few times out there but I stayed positive and hopeful and I think it showed in my swings. It wasn't my best putting weekend but I stayed aggressive and I think the shot on 17 showed that.

"I was confident in what I was doing, I had faith in every part of my game. A couple of those great par putts early on helped out a lot and the one putt from outside five feet that finally went in on 14 was a huge booster."

Next up is the Wells Fargo Championship at TPC Potomac at Avenel Farm in Maryland.

The Spaniard won his first event on home soil after coming so close in March at the MyGolfLife Open.

The 27-year-old was in his second play-off of the season after he shot a seven-under-par final round to finish on 11-under-par with South African Oliver Bekker at the Catalunya Championship.

It took six holes to separate the players. They played the 18th five times and parred it on every occasion. They then moved to the 17th which had only produced one birdie all day. Arnaus had an eight-foot putt for birdie which he missed but Bekker failed to get down in two from the greenside rough and had to settle for a bogey whilst Arnaus tapped in for par and the win.

"To come through this week is so special. It has been an amazing week.”

This week the tour returns to the UK at the Betfred British Masters hosted by Danny Willett at The Belfry.