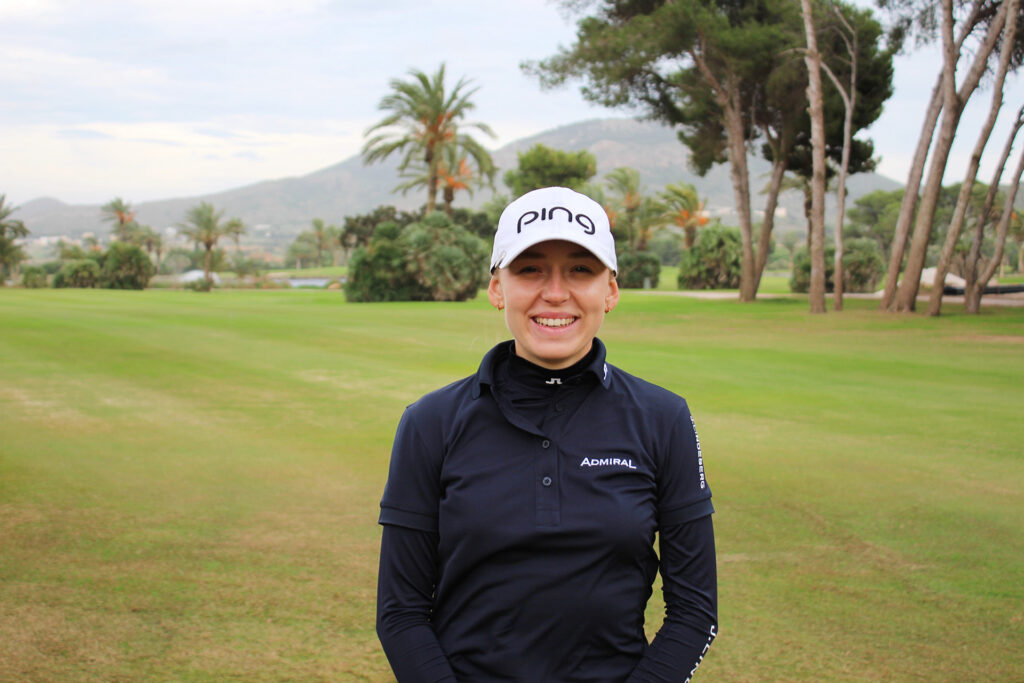 After four rounds of LET Q-School, 63 players made it through to final qualifying at La Manga

There was a tie at the top of the leaderboard at the end of Pre-Qualifier – Europe as Benyapa Niphatsophon and Emma Spitz (pictured) ended the four-round tournament in joint first place on four-under-par.

Thailand’s Niphatsophon, who is known by the nickname ‘Gift’, was playing her final round on the South Course and carded a round of 71 (-2) at La Manga Club.

The 25-year-old made a solid start to the day with four consecutive pars before she rolled in three birdies in-a-row on holes five through seven.

Despite dropping her only shot of the day on the 17th hole, Niphatsophon was pleased with her week’s efforts so far at LET Q-School.

“It was windy again and I was on the South Course again! I made a couple of putts and missed some putts,” she said. “Overall, it was good! I take whatever, I do my best and then let it go.

“It has been very fun to be here and playing. When it’s windy, it’s actually more fun even though it’s harder on the course. I don’t have a chance to play in this weather back in Thailand, so I have to challenge myself here.

“I’m still doing good and next week is going to be a good week. I hope to play well, but I don’t want to stress myself. Having fun is the most important whether I make it or I don’t. I’m going to take a lot of naps and eat a lot of food and not do too much over the next three days to prepare for next week.”

It was an up-and-down round for overnight leader Spitz, who produced a final round of 73 (+2) on the North Course in Spain.

The former UCLA player made a bogey on the first, but soon rolled in back-to-back birdies on three and four before dropping another shot on the seventh.

As the wind picked up in the afternoon, Spitz struggled slightly with the conditions and ended up with one birdie and three bogeys on her back nine to finish the week with a total of four-under.

“Especially at the end it was super windy, but I think I played really well today, and I just struggled on the greens a little more than the last two days,” she said.

“My distance control wasn’t great, and I had three three-putts so that cost me a few shots, but other than that I think my game is good for now and if I can play like this next week, I’d be very happy.

“I think on the one side, it’s maybe hard to keep focus for so long on the same course, but it’s good that there is two. On the other side, I feel like it’s kind of practice rounds and I don’t like them anyway! I prefer tournament rounds, so maybe I don’t need to play anymore before the tournament.

“Tomorrow I’m going to sleep in, get a few workouts in and do a bit of practice, but mostly I just want to relax and recover for next week. I think I’m going to work on my putting, it’s something that doesn’t take too much energy which is also good, so I’ll work on that and hopefully have it better for next week.”

In solo third place at the end of Pre-Qualifier – Europe is Australia’s Kelsey Bennett, who signed for a round of 75 (+2) on the South Course, to finish with a total of two-under-par.

It was a colourful front nine for the Aussie amateur with only one par, four birdies, three bogeys and one double bogey.

Thailand’s Trichat Cheenglab, who is known by the nickname ‘Mine’, ended Pre-Qualifying in outright fourth place on one-under-par.

Three players finished in a share of fifth place with Australia’s Kirsten Rudgeley, England’s Billie-Jo Smith and Norway’s Michelle Forsland on even par.

Australia’s Amy Walsh and Scotland’s Louise Duncan both produced the round of the day, carding a 67 (-4) on the North Course and with both players making it through to the Final Qualifier.

The cut fell at +10 with 63 players including eight amateurs advancing from Pre-Qualifier – Europe to the Final Qualifier, which takes place between December 17-21.