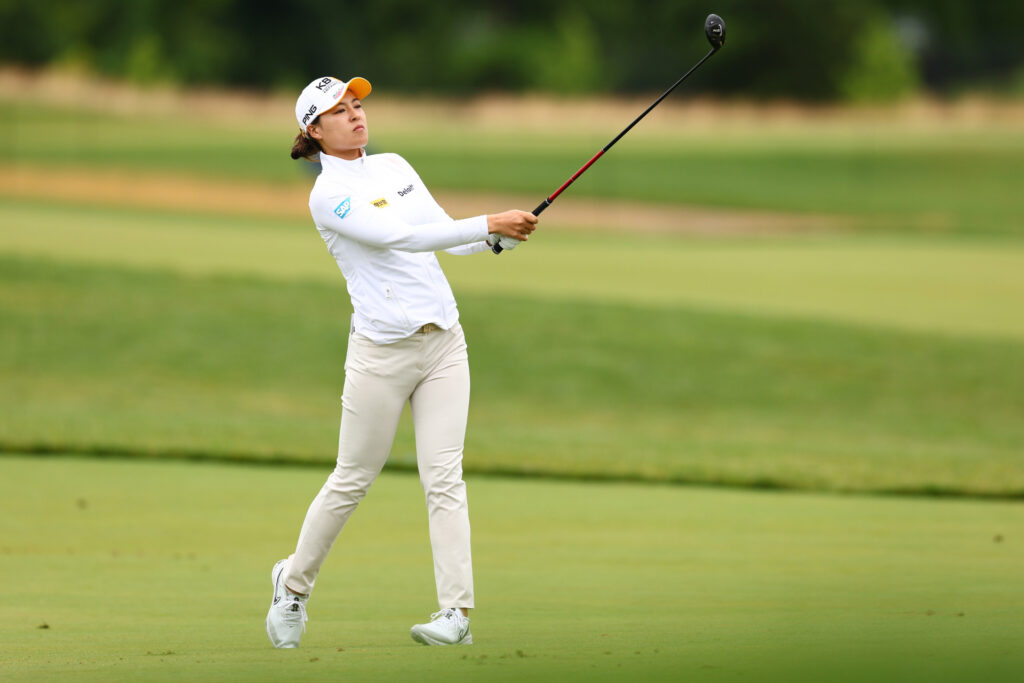 Whilst others faltered in tough conditions at Congressional. In Gee Chun shot the course record to lead the KPMG by five shots after the first round.

Caddie Dean Herden took an early scouting glance at Congressional Country Club Thursday morning, a course still soaked from two inches of overnight rains, and noticed that no tees had been moved up for the opening round of the KPMG Women’s PGA Championship.

It was. Fortunately, he was carrying the bag of a monster slayer. In Gee Chun’s first-round, course-record, 8-under 64 early Thursday prompted a near-universal response from players filing one by one out of the scoring area having just been roughed up by the length and demands of Congressional: Referring to Chun’s amazing round, the players had a single inquiry: “What course was she playing?”

When Chun, the 2015 U.S. Women’s Open champion, finished her round near the middle of the morning wave, there were no other rounds in the 60s, and only seven other rounds below par. The field scoring average at the time: 76.04; she was a dozen shots better than that. Not since Mickey Wright at the 1961 LPGA had a player led by so many strokes after the first round of an LPGA major championship.

Only three players in the 60s

By day’s end, only two other players in the field – Hye-Jin Choi and Pornanong Phatlum – would join Chun in the 60s. Both players shot 3-under 69s in the afternoon. They had the only bogey-free rounds of the day. Phatlum’s 69 included a hole-in-one at the 199-yard second hole, the first ace in the championship since 2018.

On a golf course where players were hitting hybrids and 3-woods even into par-5 holes, and birdies were as rare as finding pearls in oysters, Chun made birdies on half her holes. She birdied the final four holes of her opening nine (Congressional’s back nine), made her lone bogey of the day after the turn, then tacked on four more birdies on the way home.

Herden’s heaping praise kept teetering between “unbelievable” and “amazing.” Chun owns three LPGA victories, and two of them are majors (she added the 2016 Evian Championship to her 2015 U.S. Open.) She made only one bad swing all day – hitting a thin 9-iron at her second-to-last hole, the eighth, but still saved par. Chun, 27, hit all 14 fairways and 15 greens in regulation. She used the putter 25 times.

Herden said he has only seen one other ballstriking round that exceptional from Chun since her 2015 U.S. Open victory, that being the third round in Singapore four months earlier. She shot 66 that day. Her low career score on the LPGA is 62 (Kingsmill, 2016).

With Congressional having undergone an expansive renovation by Andrew Green that was completed in 2021, Chun’s 64 stands as the new record on what is now known as the “new Blue.” For a time, Chun couldn’t even calculate how many birdies she was making in the round.

“I didn't think about all the history from the course today,” Chun said. “I just keep going to make birdie as much as I can, knew I had nine birdies on the 18th tee, yeah.”

Her magic club for the day was a 7-wood that she had dialed in on Tuesday and Wednesday with Ping reps on site. She carries the club about 190 yards. Herden said she hit it four times to set up birdies on Thursday, hitting shots 10 feet or closer each time.

Herden said it reminded him of his days working for Jiyai Shin, a former World No. 1 who wasn’t the longest player, but could get dialed in and go on torrid stretches of golf.

“It felt like that today,” he said. “I just kept my mouth shut.”

Fourteen players broke par, which says something about the quality of Chun’s round. Inbee Park, a three-time winner of this championship, felt she achieved something by getting to the clubhouse in level par, and World number two Nelly Korda was pleased with a 71. It was a long battle, with a course softened overnight, tee shots not rolling, and rain falling for a good portion of the morning.

“The front nine was brutal, the weather we played in. 9 was -- oh, my gosh, I had driver, hybrid, 7-wood into the green. That's the longest par-5 I've ever played. I was happy to play the front nine even”

“The front nine was a beast,” Park added. “I hit like 3-wood and 5-wood into holes. The fourth hole (436 yards) was almost impossible. I made two bogeys on the par 5s. I think I grinded it out well. ... The course is in perfect shape, but that rain, it just played really long. Sixty-nine hundred (yards) was playing like 7,200.”

Added Park, “I don’t know what she (In Gee) is doing, but she must be doing something right.”

It was something special.