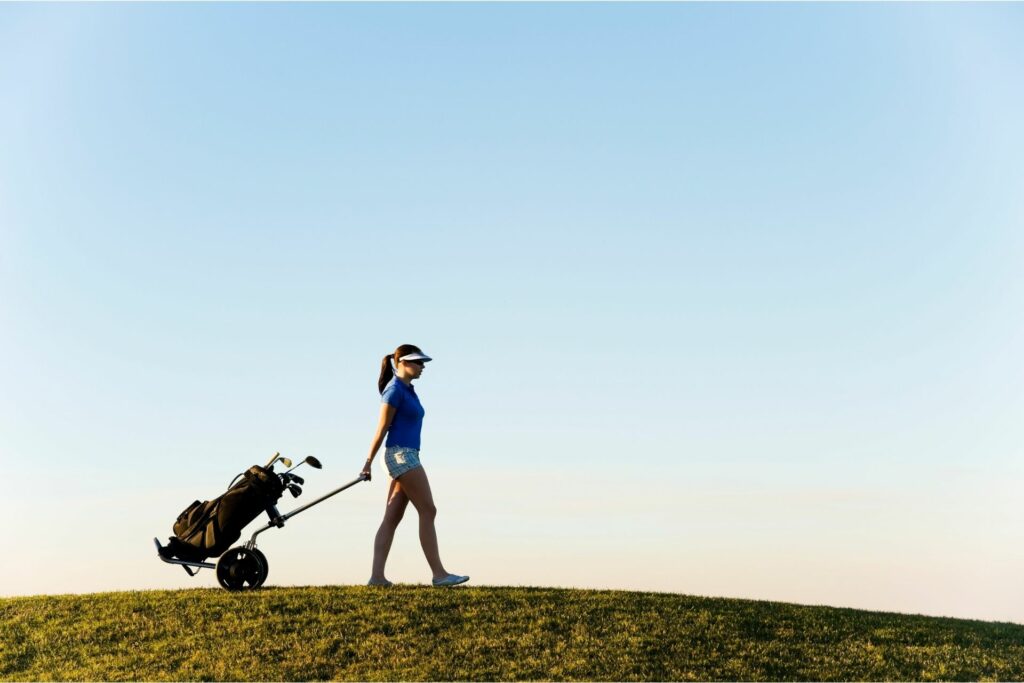 Considering what has happened over the last 18 months, golf in the UK is in a good, in fact a great place. Some golf clubs are oversubscribed, courses have been busy and thousands of new players have been taking to the fairways. At a time where the focus on health and wellbeing has never been more central to our lives, golf has provided a perfect outlet to help us cope, connect back with friends and family and offered a place to shift our focus away from the constant grim news headlines.

Earlier this year England Golf reported that there had been a significant increase in the number of women playing golf and becoming members at golf clubs. A 1.5% increase may not sound like much, but with the multiple drives to get more women into the game, it seemed that the pandemic had a least had a positive impact at club level. Also, they found that there were over 550,000 women who were playing but not yet members of a golf club – what a fantastic opportunity for clubs around the country.

Walking away from golf club membership

So, it was disappointing to hear from one ex-golf club member this week who has had to walk away, with five friends, from the golf club that she has played at for the last four years due to the inability to have a membership option to suit someone who has a modern busy lifestyle.

Her love affair with golf started like a lot of other new women to golf, she joined a women’s specific coaching programme at the golf club her husband played at. The six-week course enabled her and her friends to really catch the golf bug and after a further six lessons, she was regularly out on the golf course. The golf club offered an introductory membership, around £300, which worked perfectly, due to having children and a full-time job she wanted the flexibility to play twilight and weekend golf.

She fully embraced club life, attending social events, always finishing her round with food and drinks in the clubhouse or maybe fitting in breakfast before a round. The pro shop was a little old fashioned, so she and her friends asked about getting more women’s clothing in, the club embraced it and even ran a fashion show (which she had to push to happen in the evening after work).

Increasing fees and no membership flexibility

All seemed to be well, but after the first year, the fee was increased. The friends accepted it but started to question whether it provided value for money. None were interested in playing in competitions, not that they could anyway as they are held on a Tuesday, and all they wanted was to get a handicap and play nine holes.

Due to lockdowns, the number of times they had the opportunity to play hadn’t been often over the last 18 months. So this summer, still feeling like relatively new golfers, they were surprised to find out that the club was not going to allow them to stay on the membership that they had. They had a choice of two memberships which were over £1000 for the year, an increase of over 60%.

They tried to provide the club with alternative options and explained how much they didn’t want to leave the club but it fell on deaf ears. Even the established women members were not supportive in helping them to plead their case. The club was content with the bubble that golf is in at the moment, they were happy to let six members go rather than thinking about the long-term impact this could have on the golf club.

It should also be noted that this comes from a golf club that has signed the Women in Golf Charter and does not have a growing women’s section.

Do you need to be a member of a golf club?

Some may argue that maybe this golfer and her friends don’t need a golf membership. With the introduction of the World Handicap System and National Governing Bodies offering non golf club members the opportunity to maintain a handicap, where is the incentive?

But that misses the point. For a lot of golfers, the golf club is so much more than just the golf course, it’s a community. As the ex-member told me, she is just so disappointed and sad to have lost something that she and her friends loved so much.

My experience has been completely the opposite and I have found a club that has multiple membership options to appeal to a wide range of golfers. However, I completely sympathise with this golfer’s situation as a full-time worker and mother of two young children. I am looking for something very different from a golf club membership than my parents for example.

(Some) golf clubs need to change

It also isn’t just women who struggle to juggle the commitments of work and family life. A full or five-day membership or nothing just cannot be an option in this day and age. Flexibility is going to have to be key to golf club’s surviving once people’s lives return to normal.

For golf clubs to rest on their laurels and believe that memberships will keep booming shows a lack of insight into the longevity of the golf club. Why turn loyal members away, rather than working on ways to make them stay? Sometimes golf baffles me and this is a case in point.

What are your thoughts on this situation? Have you experienced similar at your golf club? I’d love to hear from you – please drop me an email here.