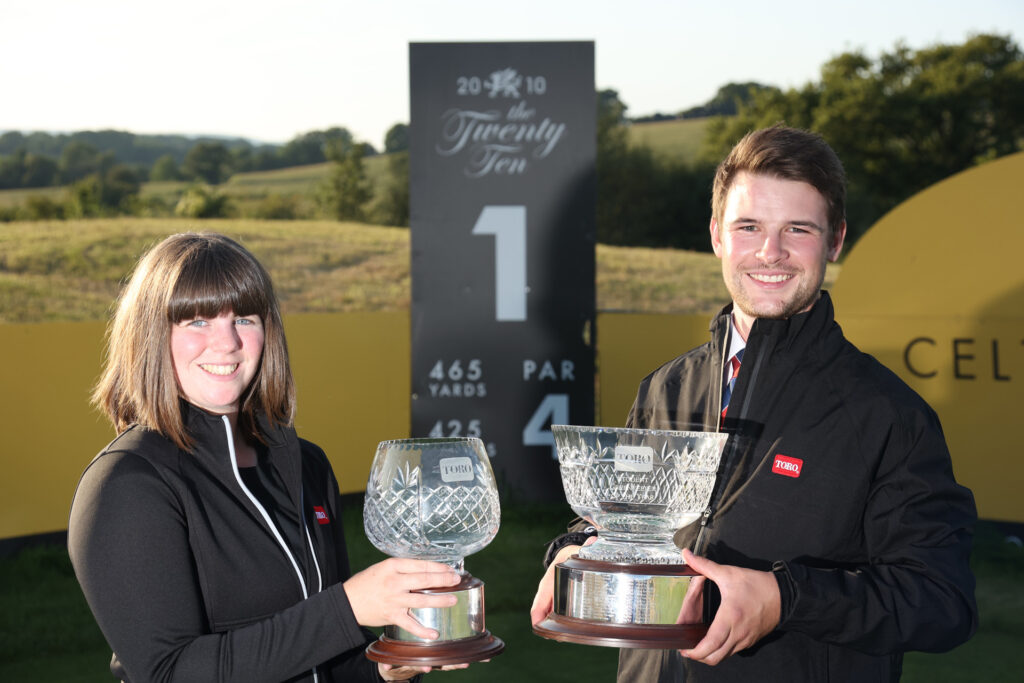 The 22-year-old is the first woman to be a finalist and to win the award. She collected her award alongside Matthew Milligan who won the Toro Student Greenkeeper of the Year Award.

A greenkeeper from Rudding Park Golf Club was celebrating for the second year in a row as Matthew Milligan secured the prestigious Toro Student Greenkeeper of the Year Award at the grand finals hosted at Celtic Manor Resort.

Myerscough College student Matthew, 26, is First Assistant at Rudding Park, the same venue that Jason Norwood was employed at when he won the Toro Student Greenkeeper of the Year Award in 2019.

Joining Matthew in celebrating at the event was Rhian Barton, 22, of The Wisley Golf Club, who became the first woman to win the Toro Young Student Greenkeeper of the Year Award since its inception in 2016.

This year the finals were hosted for the first time in the championship surroundings of the Celtic Manor Resort, host of the 2010 Ryder Cup. Director of Golf Courses and Estate Management Jim McKenzie MBE welcomed the finalists to the venue with a walk around the Twenty Ten course. Jim then spoke to the finalists about that experience and offered sage advice on how to develop their careers.

About the Toro Student Greenkeeper of the Year Awards

With the awards split into two separate categories once again, candidates for the Toro Young Student of the Year Award, who must be aged 21 and under when nominated, undertook an exam and then a hole walk with the awards judges, intended to test the finalists’ knowledge in a real-world setting. The finalists in the Toro Student Greenkeeper of the Year main category also completed an exam but in addition were judged via a grass and seed identification challenge, by answering an essay question and by delivering an individual presentation about their careers so far.

The Toro Student Greenkeeper of the Year Awards were introduced in 1989, with an additional ‘Young’ category introduced in 2016. The awards did not take place in 2020 due to the coronavirus pandemic, but the reintroduction in 2021 enabled David Cole to participate one final time ahead of his retirement as managing director of Reesink Turfcare in spring 2022.

“We knew this year’s award was going to be special. Being back after last year’s lockdown absence with a fantastic calibre of finalists in the grand setting of Celtic Manor Resort, plus a course walk around the Twenty Ten Ryder Cup course and after-dinner speech, both by Jim McKenzie MBE, made it one to remember before we’d even conducted the finals.

“All the finalists showed how much promise there is and how much there is to celebrate in the next generation of greenkeepers. So, it is a huge achievement for the winners, Matt for the main award and Rhian for the young award, to have triumphed. I know both will make sure they maximise the opportunities presented by their educational, international prizes.

“However, the event was bittersweet for me as it is my last. I am leaving Reesink this spring, but to see two such worthwhile winners and especially to see Rhian, our first-ever female young finalist let alone winner, makes it the perfect one to finish on.”

A record-breaking number of nominations

“I’m delighted to be able to present these awards to Matthew and Rhian at the culmination of this year’s Toro Student Greenkeeper of the Year Awards. The competition began in March with a record-breaking number of nominations and concluded over the past two days with 12 outstanding finalists who all deserve to be applauded for their knowledge, passion and dedication to the greenkeeping profession.

“The Celtic Manor Resort provided a breathtaking venue for this year’s finals and we continue to be incredibly grateful to Toro and Reesink Turfcare for providing this career-defining opportunity for our most ambitious and talented student members.”

Winners of the main award receive a Toro Scholarship that includes a turf management study course at the University of Massachusetts, a trip to the Golf Industry Show and a visit to the Toro factory. Should coronavirus restrictions prevent this, an alternative prize of equal standing will be organised.

The Toro Young Student Greenkeeper of the Year winner receives a two-week work placement at Vidauban Golf Club in France, plus a trip to Continue to Learn at BTME.

Prizes are also given to the winners’ endorsers and the runners-up in each category, with Craig Woodman of Broadstone Golf Club and Will Pallister of Cleckheaton & District Golf Club coming second in their respective categories. For Craig it was the second time he had finished as runner-up at the awards, having also done so in the Toro Young Student Greenkeeper of the Year category in 2017.

The Toro Student Greenkeeper of the Year Awards will return for 2022, with nominations opening in March next year. Find out more here.