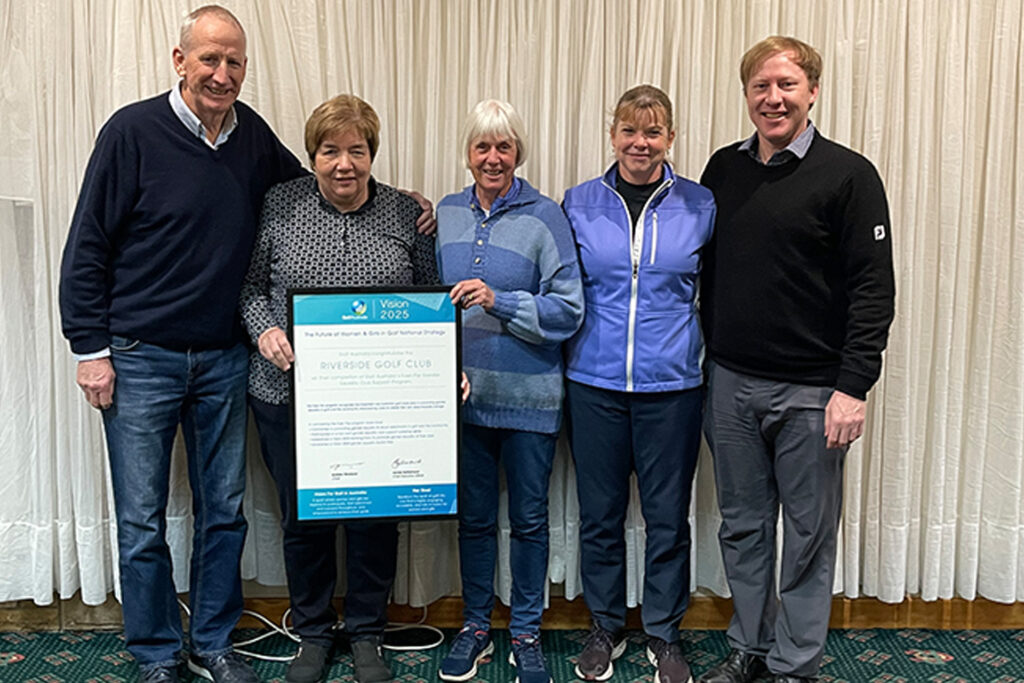 Golf Australia’s April Visionary of the Year winner is Riverside Golf Club in Tasmania who have used various initiatives to get more women into golf.

The introduction of various initiatives designed to encourage more women and girls are proving to be a stroke of genius for Riverside Golf Club, based in Launceston, Tasmania. Yet, it is the simplest of philosophies that guides its success.

As well as the traditional offering of golf, Riverside seeks to encourage people into the club through other means, including croquet and Footgolf, where participants kick an oversized soccer ball into a big cup in as few shots as possible, using the space of the golf course.

“Last time I was at the club, 12 women turned up in active wear to play FootGolf”, said Simon Weston, Golf Australia’s Golf Development Manager, Tasmania. “They then finished with some drinks in the clubhouse. Things like this are giving a really good vibe.”

Welcoming the local community to the golf club

Riverside also has a strong commitment to breaking down stereotypes within the community. In 2020, the club conducted a letterbox-drop, welcoming locals and encouraging them to use the facilities including the bar, which has views like “nowhere else in Launceston”, according to Boulton. That move proved to be decisive and pleasingly, fully supported by the club's members.

“We haven’t had to sell it, which is great. We are a very forward thinking club and very aware of the importance of having more women and girls,” Boulton said.

“Even Par is a commitment we made early on as a Board. We all agreed that it was something we wanted to ‘jump on board’ with," Boulton said.

“When we went through all the processes, and saw the pathways to opening up opportunities for women and girls to be more actively participating in our club, we thought it was perfect.”

More recently, Riverside has also been a pioneer for the R&A Women in Golf Charter, becoming one of the first six clubs in Australia to sign the commitment to a more inclusive culture within golf.

One requirement of the Charter is to support measures to increase the number of women, girls and families playing golf, and they have done so by increasing their weekend offerings for women. Female members are now able to play rounds within the club championship over the weekend, while their Get Into Golf women’s program has shifted to Sundays.

“We have a few businesswomen who can’t play during the week, so opening up our women’s club championship this year, is something we’re really happy to do and it ties in to our commitment to the R&A Women in Golf Charter,” Boulton said.

“Get Into Golf was just a logical one. It worked well for our club professional, Michael Swan. We’re a small team in the pro shop, so finding the time is a win-win.

Women’s captain, Amanda Smith, who is on the club’s board and works in the office during the week, actively drives the three-hole membership as an option for Get Into Golf participants to continue their golfing journey, and it’s an initiative that exhibits the club’s welcoming nature.

“Amanda gets out there with the new three-hole members and has them playing shots out of bunkers, and all the other things they might have been worried about doing, on their first time out on the golf course," Boulton said.

“The three-hole membership is only $100, so if they only play a couple of times, they’re getting value, and It’s also one of the reasons people are going-on to sign up for the nine-hole membership.”

That approach also sees Riverside breakdown its membership offering into aged categories with relevant discounts, in order to keep the time-poor members coming back to the club.

The members have also welcomed the introduction of a quota of two positions on the board for women, and the club’s internal strategy for enhancing gender balance – which is part of their commitment to the R&A Women in Golf Charter – supports women joining the board.

Australian Golf congratulates Riverside Golf Club on its wonderful commitment to equality and growing our great game, so that everyone can enjoy it.

Riverside Golf Club wins a $500 Drummond Golf voucher and is now in the running to win up to $10,000 worth of products from the latest Callaway REVA product range, designed specifically for women. Golf Australia’s Visionary of the Year will be voted upon and announced towards the end of the year.